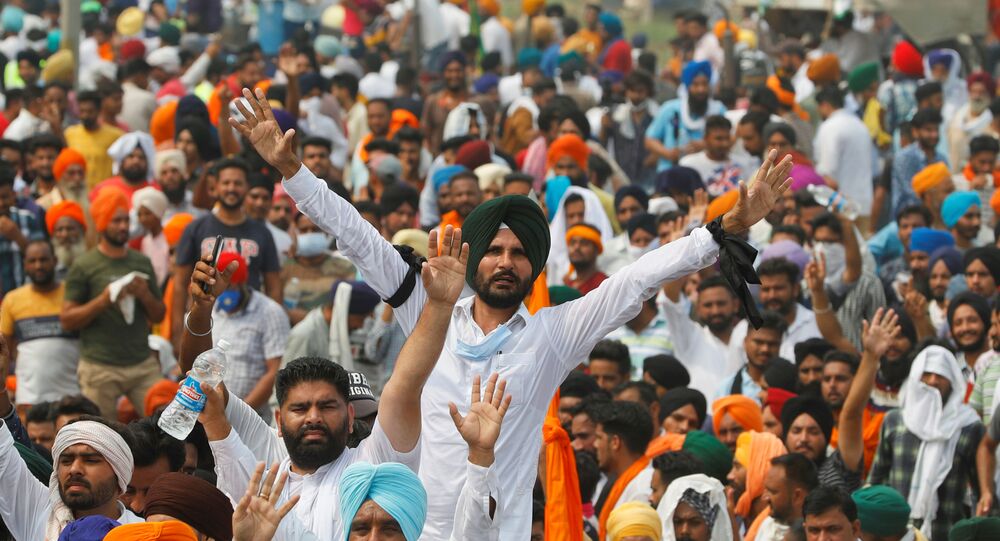 Pushkaraj Tayade, the founder of Maharashtra-located Centre for Agricultural and Rural Development (CARD), told Sputnik that the case study of Shree Swami Samarth Farmer Producer Company Ltd cited by PM Modi during his monthly radio address, couldn’t be seen as a successful model in other parts of the state, let alone the entire country.

"The irrigation system around the cities of Pune and Mumbai is much better than in the Marathawada region. We have drought here every second year, which directly contributes to farmer suicides," underlined Tayade.

According to a Right to Information (RTI) reply reported by news channel NDTV last year, the rate of farmer suicides in the Marathwada region’s eight districts rose by 91 percent between 2015 and 2018, as compared to the previous three years. Reportedly, 11,995 farmers committed suicide in the drought-prone region between 2015 and 2018.

Amid raging protests in grain basket states like Punjab and Haryana, Modi said that one of the new laws, The Farmers Produce Trade and Commerce (Promotion and Facilitation) Act, 2020, allows farmers to sell their produce outside Agricultural Produce Marketing Committee (APMC) zones.

Modi went on to name five farming entrepreneurs in Indian states- Haryana, Tamil Nadu, Maharashtra, Gujarat and Manipur, as he underlined how the deregulation of agricultural trade had helped them.

The PM cited the example of Shree Swami Samarth Farmer Producer Company Ltd, the weekly market at several locations in Mumbai and Pune in the Maharashtra state. According to its website, the company aims to increase farmers’ income by eliminating the role of middlemen. "That only became possible because we took away the powers of APMCs," claimed the PM, as he reiterated his politically popular commitment towards ‘doubling farmers’ income by 2022’.

Countering Modi’s claim, Tayade noted that the logistical and food supply chains in larger cities like Mumbai can't be compared to those in smaller towns. "Most of these farmer cooperatives readily find buyers, be it big supermarket chains, online retailers or others. Here, the farmers have no choice but to rely on the APMC mechanism," noted the farmer rights’ activist.

The Agricultural Produce Marketing Committees, or government-regulated wholesale markets, charge a commission from both farmers and traders in their area of operation. Government data suggests that India has a total of 2,477 APMCs and more than 4,800 submarkets spread across the country.

Tayade also differentiated the landholding patterns of farmers around the more prosperous and well-connected urban centres with their counterparts in remote and less affluent regions. "Almost 67 percent of our farmers own small plots of land less than 1 acre,” he stated, highlighting the findings of the Agricultural Census in 2015.

More than 90 million Indian households relied on agriculture as their primary source of income, according to the federal government’s 70th Round of National Sample Survey Organisation (NSSO).

"Farmers in small towns away from cities still trust the APMCs. They are fearful of private players. Trying to abolish the APMC altogether is the wrong approach to reforms," claimed Tayade.

Bihar: A Model That Exposed the Vulnerability of Modi’s Reform

Kumar Neeraj from Khetee, another farm-related nonprofit in the eastern state of Bihar, argued against the federal government's push to weaken the powers of APMCs while giving private companies more leeway.

“The five examples that had been cited by the Prime Minister were all about industrial scale farming, which is not the dominant scenario in the country,” said Neeraj, whose organization is helping Bihar’s farmers develop ecologically sustainable farming practices.

He highlighted that in his home state of Bihar, which is relatively underdeveloped compared to other Indian states, a lack of irrigation facilities and supply-side infrastructure were the primary reasons behind falling economic output.

Despite being the only Indian state to have completely repealed the APMC system in 2006, the revenue from Bihar’s agricultural output has witnessed an overall decline.

“Despite the abolition of the Agricultural Produce Market Committee (APMC) Act in 2006, private investment in the creation of new markets and strengthening of facilities in the existing ones did not take place in Bihar, leading to low market density. Further, the participation of government agencies in procurement and the scale of procurement of grains continue to be low,” a study by New Delhi-based National Council of Applied Economic Research (NCAER) said in November 2019.

“Thus, farmers are left to the mercy of traders who unscrupulously fix lower prices for agricultural produce that they buy from farmers. Inadequate market facilities and institutional arrangements are responsible for low price realisation and instability in prices,” it added.

Neeraj explained that another consequence of the failure of state government’s agriculture policy could be seen in migration patterns of Bihar’s farm labourers to states such as Haryana and Punjab, both of which have better irrigation facilities, large landholdings as well as better supply-side infrastructure.

Eight-term Parliamentarian and farmer rights' activist Hannan Mollah alleged that curbing the powers of the APMCs would be a direct assault on India's Public Distribution System (PDS) and was a step in the direction of removing MSP. "This government is moving in the direction of making direct cash transfers universal, in all spheres. Such a scenario would leave everyone prone to inflation, more so the poor who rely on government-rationed food," Mollah told Sputnik.

"I don't believe what the Prime Minister is saying. This is a big set-up to handle the reins of the country's agriculture to big corporates," he remarked.

Rajendra Sharma, the former President of the Azadpur APMC, one of Asia’s largest vegetable and fruits wholesale markets, told Sputnik that the state governments would be the ‘biggest losers’ if APMCs were abolished. “Nearly three percent of the trade value at APMCs is pocketed by the state government, another three percent by the Managing Committees and around 2.5 percent goes in the pockets of middlemen,” he explained.

“The state government uses its revenue to improve local infrastructure. The federal government makes nothing under the APMC commission rules,” he added.

Sharma, who now heads the Food and Vegetable Traders’ Association, went on to claim that there might be hundreds of more case studies like the one cited by the Indian Prime Minister.

“However, there can’t be a comparison of these large farmers with the smaller ones. Large farmers are better aware and can negotiate directly with big companies,” he said.

Singh recalled that APMCs were introduced by British colonialists at the behest of small farmers, after they alleged exploitation at hands of traders who sought to buy their produce.

Indian Farmers to Rahul Gandhi: Procurement of Produce Below State Price Must Be Punishable Offence