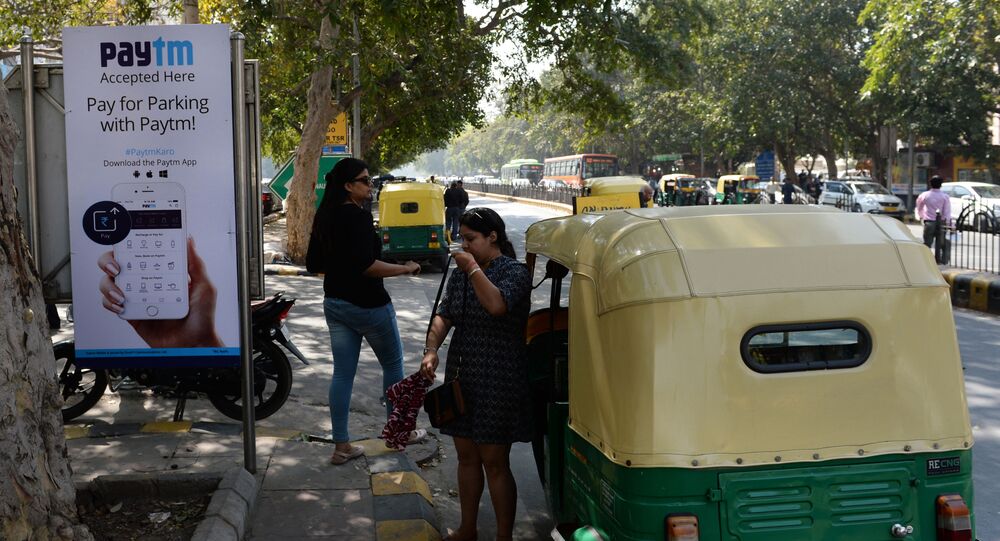 'Their Enforced Laws Not in Line With Ours': India's Paytm Challenges Google Play's Dominance

On 18 September, India's own digital payments app Paytm was "temporarily blocked" by Google Play for allegedly violating guidelines on facilitating online games concerning real money. In a bid to compete with Google in the app-mall space, Paytm has now launched its own mini app store in India.

With over 140 million users, Paytm is a popular online payment app in India that is now raising its voice against Google levying a substantial 30 percent commission on any transaction made for a digital product or service through its in-app billing system, Mint reported on Monday.

"Just because Google owns the gate and the gateway to the digital ecosystem of this country, they should not act arbitrarily and enforce their rules and regulations that are contrary to our country’s laws. Google’s stand in courts is that it does not need the Reserve Bank of India’s authorisation as it is not a payment system operator and, here, it is mandating that Indian apps use only Google’s proprietary billing and payment systems. Google should not exercise its dominant position, rather allow a level-playing field for everyone", Vishwas Patel, Chairman, Payments Council of India said while filing a complaint against the global tech giant with India's Ministry of IT last week.

The unrest around the tech titan's "unfair" policies on Google Play have been troubling Indian tech biggies for a while now.

Earlier last week, Harshil Mathur, co-founder and CEO of another India-born online payments app – RazorPay unwinded on Twitter about the dire need for India to have one of its own app-malls – in line with Prime Minister Narendra Modi's vision of making India "self-reliant".

India needs a local app store long term else 30% tax will eat up most businesses, is anyone trying to build one? https://t.co/cSdLvjPFVi

​With its own mini app store, Paytm also aims to provide Indian manufacturers with a level playing field to expose domestic users to their services and products. The platform issued an official announcement on Twitter on Monday.

Empowering Indian developers to take their products to the masses, with Paytm. 🇮🇳 https://t.co/aYlzfxqK1y

​Netizens welcomed the mini app store with mixed reactions. While some pointed out that Paytm’s rival PhonePe already offers similar services, others just joked around asking if Paytm has decided to remove Google from its app store as revenge.

When you tired of a system...... Either you can sit back or you can try to change it. 😃✌️@Paytm @vijayshekhar @vishalgondal pic.twitter.com/YegHRpBxch

That’s a sudden cute realisation for Google. And Paytm has now announced a "mini app store" for Indian app developers [which includes Decathlon ;)]. This is just like WeChat which Paytm always aimed for.

Nothing is what meets the eye these days. pic.twitter.com/x16rXGeKFb

Then what, remove #Google from it for a while? 🤣

Paytm is launching a mini app store to take on Google.

This will be interesting. Removal of the 30% fee looks lucrative, but can the new app store convince the user?

I'm inclined to believe it'll just remain one of Paytm's many divisions that'll be forgotten within two months.

You cant build a platform on top of another platform

Paytm Mini App store looks more like a super-app(Wechat,Gojek) rather than an Android Play store or Apple App store

​On 29 September, Google said that it is mandatory for the apps being distributed via its play store to use its internal billing and revenue sharing system as the method of payment – in case the apps need or accept payments for special features or services. Google backed its stance saying this reduces the chances of revenue leakages to Google from Google Play.

At the time, Payments Council of India founder Patel had noted that Google cannot "force" Indian developers to use Google billing and charge a commission for it, reports said.