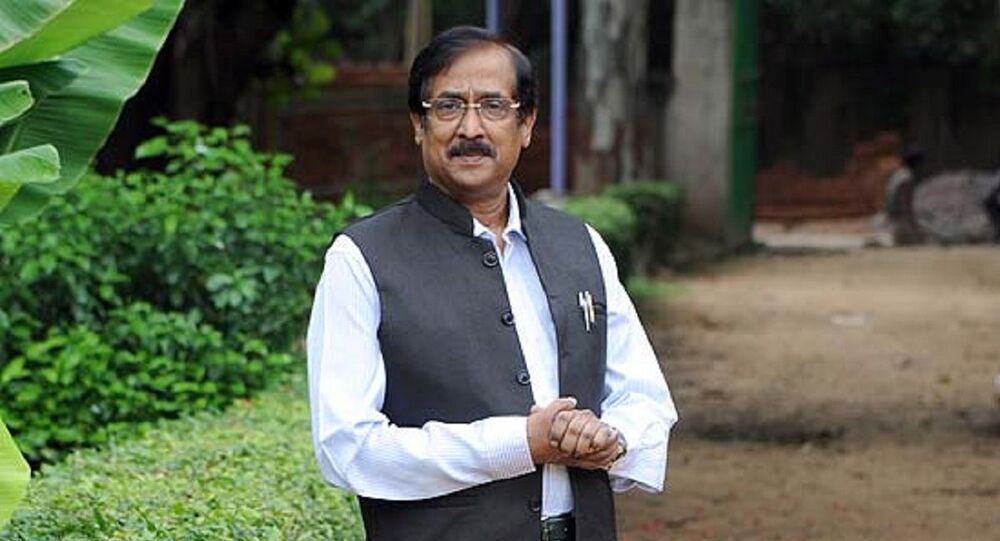 Only a 'Matter of Time' Before BJP Makes Inroads Into Southern Indian States, Says New Office-Bearer

The linguistically diverse southern Indian states have proven to be a barrier in making India's ruling BJP an outfit with a national footprint. While the BJP-led alliance managed to win thumping parliamentary majorities in federal elections in 2014 and 2019, the party's vote share has been below its national average in the states on both occasions.

"We have been a work in progress as far as the southern states are concerned. The voters in the five non-Hindi speaking states have begun to see through the deception of the Congress Party. It is only a matter of time before our hard work and investment start to pay off", remarked Vadakkan, who was appointed as the BJP's spokesperson last week. The reference was to the five southern states of Tamil Nadu, Kerala, Karnataka, Andhra Pradesh, and Telangana.

Vadakkan emphatically rejected the charge that the party pandered more to Hindi-speakers living in the northern "heartland states".

"The perception that the BJP is against Muslims, Christians, and other minorities is also wrong. They have appointed me, a Christian, from Kerala as the spokesperson", underlined Vadakkan.

"There are 70 Muslims office-bearers in the new organisational set-up", he highlighted.

© REUTERS / STRINGER
Hailed or Assailed: Five Key Moves of the Indian Government Under Narendra Modi's Leadership
Sixty-two-year-old Vadakkan had been with India's main opposition Congress Party for 20 years, before he switched to the BJP in March of last year, a month ahead of the parliamentary elections in April.

Vadakkan said that he wasn't comfortable with his former party's leadership questioning India's retaliatory airstrikes inside Pakistan-administered Kashmir. India claimed that its Mirage-2000 fighter jets bombed a terror camp run by terror-outfit Jaish-e-Mohammad about 50 kilometres from the de-facto Line of Control (LoC) border. Pakistan, on the other hand, claimed that the Indian jets bombed an empty area and hurt nobody.

"You can't question the nationalism of Indians. Be it in the north or the south, every Indian is a nationalist at heart", the BJP politician reckoned.

Southern States Have Been a 'Challenge'

Seshadri Chari, a member of the BJP's National Executive Committee, told Sputnik that his party had indeed faced challenges in winning over voters in southern India.

"States like Kerala and Tamil Nadu have proven to be a challenge for the BJP", he said, adding that the BJP had, however, managed to make impressive inroads into Karnataka.

According to data compiled by business daily Mint after the election results last year, the BJP's vote share in the five southern states was 17.6 percent, compared to its national vote share of 38 percent. The BJP only managed to win 29 of the 88 seats up for grabs, which the newspaper report said was half its strike rate at the national level (66 percent).

Chari said that the BJP was aggressively being backed by its allied organisations such as the RSS and the Vishwa Hindu Parishad (VHP) to help it expand its political footprint in states like Kerala and Tamil Nadu, the two states located at the tip of Indian peninsula.

"The challenge in Kerala is that the power vacillates between the Communist-led front and the Congress-led government. Similarly, Tamil Nadu has its own dynamics", he explained.

"There are local issues, local traditions, and local candidates, all of who combine to play a part", said Chari.

The BJP has installed several of its prominent leaders from the non-Hindi speaking regions of southern and eastern India as the heads of its grassroots allied outfits.

Tejasvi Surya, a 29-year-old Karnataka-based firebrand parliamentarian, has been made the head of the party's youth wing Bharatiya Janata Yuva Morcha (BJYM). K Laxman, a leader from predominantly Telugu-speaking Telangana has been appointed as the chief of the party’s Other Backward Caste (OBC) outfit. The organisational rejig is the first to have taken place under the party’s new president JP Nadda.

Importantly, the position of National General Secretary (Organisation) is held by BL Santosh, a social worker from the state of Karnataka.