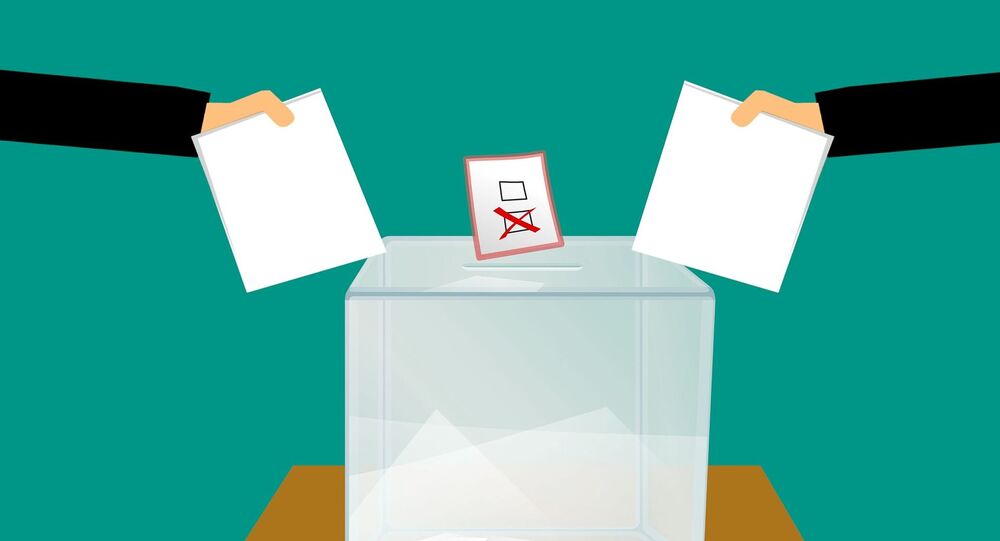 With 243 seats at stake, Bihar's Assembly is set to face an election from 28 October amid Covid-19 pandemic, with results to be out on 10 November. Stakes are high for both the ruling alliance of Janata Dal-United and Bharatiya Janata Party and on the other side Rashtriya Janata Dal and Congress in a state well-known for caste-ridden politics.

With blaring loudspeakers and colourful hoardings at the main crossroads in Bihar’s capital city Patna, electioneering has returned to the State despite widespread fear of contracting Covid-19 amid a surging caseload.

The State is quickly gearing up for a crucial full-fledged legislative assembly election, the first since the pandemic hit India earlier this year.

© AFP 2020 / DIPTENDU DUTTA
Opposition Clangs Utensils to Protest Modi Govt's Virtual Rally in Bihar - Video
While the loudspeakers tethered to poll campaigning vehicles play jingles to solicit votes from the electorate, the hoardings are wooing them with catchy slogans and messages in Hindi and other local languages.

The Opposition, led by RJD, has not taken the attacks lying down. Though Yadav, a former State chief, is in prison, his son Tejashwi Yadav has taken over the poll responsibility.

Addressing the leader of the JD (U) and current state chief Nitish Kumar as “Paltu Chacha” (Turncoat Uncle), the RJD-Congress combine is lampooning Kumar for his political history with the slogan “There are no permanent enemies in politics”, referring to Kumar's capriciousness in forming allegiances. In 2014, despite being a decades-old ally of BJP, Kumar severed relations with it during the elections because BJP was fielding Narendra Modi as its Prime Ministerial candidate. Instead, he threw in his lot with RJD but in 2017, fell out with the party because of differences with Lalu Yadav and his sons so he returned to an alliance with BJP.

Today, Kumar’s JD (U) party is standing against the same RJD while firmly joined to BJP, with Modi representing it as Prime Minister of India.

However, local political sources have hinted to Sputnik that a tough time awaits the ruling alliance.

At present, the BJP-JD (U) alliance has 124 seats and the opposition Congress-RJD group has 107 seats. A source in the JD (U), on condition of anonymity, admitted to Sputnik, “If elections were to be held today, the ruling alliance may not be able secure even 100 of the total 243 seats in Bihar.”

It requires 122 seats to form a government for any alliance or party in Bihar.

© CC0
COVID-19 Lockdown: Health Officials in India’s Bihar Give Free Condoms to Returning Labourers
Asked why, the source said there was massive public resentment about how badly Covid-19 had been managed and because of the poor handling of the migrant labour crisis, when tens of thousands needed help as they returned to their home state.

After national lockdown was declared on 25 March, migrant labourers walked hundreds of miles to their home state.

Bihar – one of the poorest states of the country – witnessed an influx of its original inhabitants as they returned from cities such as Delhi and Mumbai after the jobs all dried up.

The JD (U) source said this has had a tremendous negative effect on the ruling combine. “The migrants who returned to the state are agitated. There has been rampant corruption in service delivery to migrants at quarantine centres. Government officials amply exploited the opportunity to fill their pockets.”

“This may have electoral ramifications. Lack of livelihood for those who came back is also an issue,” the source added.

A senior JD (U) source, however, preferred to be optimistic because of “good work done by the state chief in the last 15 years”.

State chief Kumar has completely overhauled the state's law and order situation in the past 15 years, JD (U) politician and former state minister Ranjit Sinha. “A lot of work has been done on the roads, bridges and infrastructure sector. In fact, even on the Covd-19 front, the chief minister is personally overseeing the pandemic control works.” Sinha told Sputnik.

And the BJP claims the migrant labourers were taken good care of by Kumar's government.

Stating that almost 1.8 million migrant labourers returned to Bihar when the lockdown was announced, BJP member from Bihar’s Digha constituency Sanjeev Chaurasiya claimed: “Each of them has been given financial assistance through direct benefit transfer.”

“The total financial assistance to the migrants amounted to $24.6 million. We will seek votes on the plank of development. Our government has done a lot of work related to construction of medical colleges, highways, schools and polytechnics,” Chaurasiya told Sputnik.

One of the key opposition parties, RJD, is currently in the process of finalising the seat sharing with its alliance partner, Congress. But talks have ground to a halt as Congress is demanding more seats that the RJD is ready to concede.

A source in the RJD told Sputnik that the party will announce its electoral agenda and its key leaders will speak only after seat sharing is finalised.

The party, which is outspokenly critical of the ruling BJP, has promised that it will ensure a million jobs if it comes to power in the state. Even the ruling BJP-JD(U) alliance is facing seat sharing issues with one of its allies: Lok Janshakti Party is demanding a large number of seats, which is not congenial to the ruling alliance.