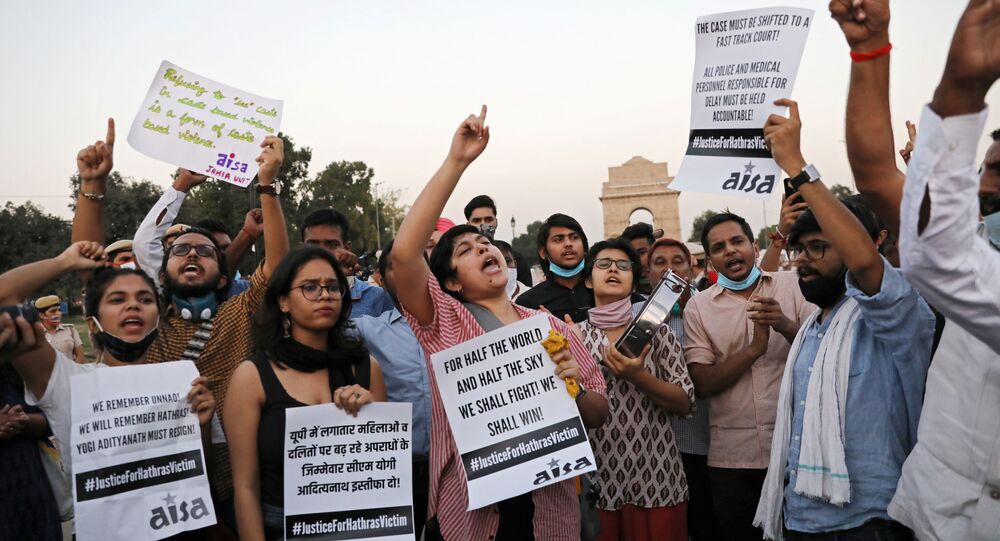 Indian opposition party leader Rahul Gandhi was allegedly manhandled by the cops, while he and his supporters from the Congress Party were on their way to meet a 19-year-old gang-rape victim's family on Thursday.

Indian social media has been flooded with calls urging the public to participate in a protest scheduled for 5 p.m. (IST) on Friday at New Delhi's iconic India Gate monument despite Delhi police banning gatherings of five or more people.

The protest has been called to demand justice for a 19-year-old victim allegedly gang-raped by four men in the northern Indian state of Uttar Pradesh.

"No gathering is permissible around India Gate due to [the] imposition of Section 144 [of the] CrPC", New Delhi's Deputy Commissioner of Police (DCP) tweeted from his official account on Thursday evening.

Under Section 144 of India's Code of Criminal Procedure (CrPC), a gathering of five or more people is illegal.

​Despite the warning by the city's police, Delhi's governing Aam Aadmi Party (AAP) asked the public to converge at the monument, in a tweet put out on Friday morning. Police in the capital are controlled by the federal Home Ministry, under Prime Minister Narendra Modi's Bharatiya Janata Party (BJP).

Let's stand in solidarity against the barbaric Hathras incident.

​The tweet by the Delhi police official on Thursday evening was preceded by mobilisation calls by members of the public.

Meanwhile, the highest court in Uttar Pradesh has taken suo moto cognizance of the Hathras gang-rape incident as it summoned officials from the state government, the Hindustan Times reported on Thursday.

The Lucknow bench of the state's Allahabad High Court reportedly said in a 11-page order that the events that took place after the death of the "Dalit" victim had "shocked our conscience".

The teenage girl, who was allegedly sexually assaulted by four men on 14 September, was cremated in the wee hours of Wednesday morning against the wishes of her family members. A video of the cremation was later tweeted by a reporter from the news channel India Today.

In another viral video making the rounds on Indian social media, the district magistrate of Hathras can be seen allegedly threatening the family members of the victim to keep their mouths shut so as to not to escalate the controversy.