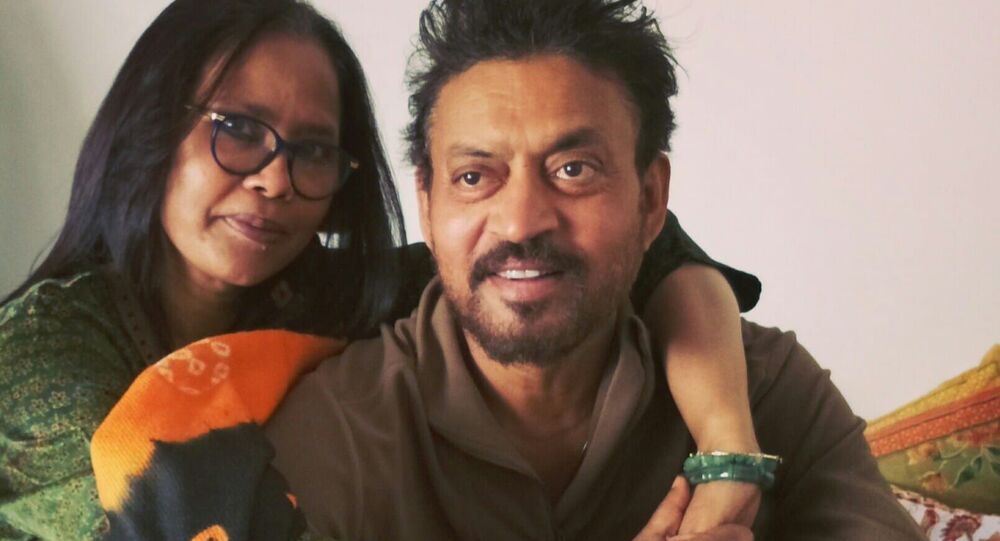 As an actor often described as an “outsider”, Irrfan Khan carved a niche for himself not only in Hindi cinema but in Hollywood too with films such as “The Amazing Spider-Man”, "The Namesake", “Life of Pi” and “Jurassic World.” He died this April following a battle with cancer and then ultimately succumbing to a colon infection.

Late Bollywood actor Irrfan Khan’s wife Sutapa Sikdar has given a befitting reply to those who often dragged her husband’s name in the raging debate of “Insider Vs Outsider”, which appears to have created a divide in India’s film industry.

In her recent Facebook post, Sutapa has said the crusaders of the debate may call Irrfan an “outsider”, who made a big name for himself in the world cinema, but he always chose to be “an objective witness” to Bollywood.

He neither sulked about being an outsider nor gossiped about not being invited to a Holi party, the festival of colours, by big stars and not getting featured on magazine covers.

Big Bollywood stars throw grand parties at their home in Mumbai on Holi, a Hindu festival of colours that signifies the victory of good over evil, which is attended by all the popular actors from the industry.

The actors who are referred to as "insiders" are the ones whose parents are already from the film industry and thus they have connections with filmmakers. They enjoy an edge over those actors aka outsiders who enter the industry having no high contacts and thus have to struggle to make it big or taste success.

Sutapa wrote on Facebook, “If you consider your work a spiritual quest you won’t be sad if people didn’t call you for their “parties” or did not come for your premieres”.

“He (Irrfan) didn't waste his time gossiping about people or bad-mouthing nor did he get depressed, he chiseled his craft and refused to be part of it till he got the cover page and he did. (he got mostly depressed not clinically but sad, looking at the disparity in the society.) or once or twice went to (the) brink of breakdown preparing for roles not because so-called insiders did not call him for Holi parties.”

Making a powerful statement about the film industry, Irrfan’s wife said: “No one owns Bollywood until or unless you think there are some people who own this industry”.

Referring to her husband’s Hollywood milestones, Sutapa added: “Bollywood couldn’t do sh*t about Irrfan getting Hollywood offers. I am happy! And obviously, some aren’t comfortable in their skin hence you love shredding characters and strangers in pretext of being a well-wisher ..wish well for yourself and the world would be a lovely place to be.”

Calling Irrfan “a great believer in individual choices”, she wrote, “He didn’t even feel to be part of vacuous stuff also without being cynical… But why would he have felt left out?? May I know? In one hand we call them toxic and on the other, we are offended if they don’t include you. It’s a weird desire you are yourself giving them the power by seeking their validation”.

Giving a piece of advice to newcomers in the film industry, “who want to be actors and not only stars”, Sutapa stated: “The moment one gives undue importance to any prevalent trend (of Insider vs Outsider) in the film industry and their lifestyle it becomes painful and pathetic for you. You are the person who has to evolve and what is the point of evolving if you can’t ignore people who don’t matter.”

Urging all to stop this ‘Insider vs Outsider’ debate and projecting oneself as a victim, Sutapa stated: “Stand tall and fight for your rights. Get your priorities right. Don’t whine because you are not inner circle. You can feel indifference towards them and survive because the inner circle is not worth you are.”

Before Sutapa, many celebs have also slammed the debate of ‘Insider vs Outsider’ in Bollywood, be it filmmaker Vishal Bharadwaj, veteran actor Naseeruddin Shah or actress Richa Chadha.