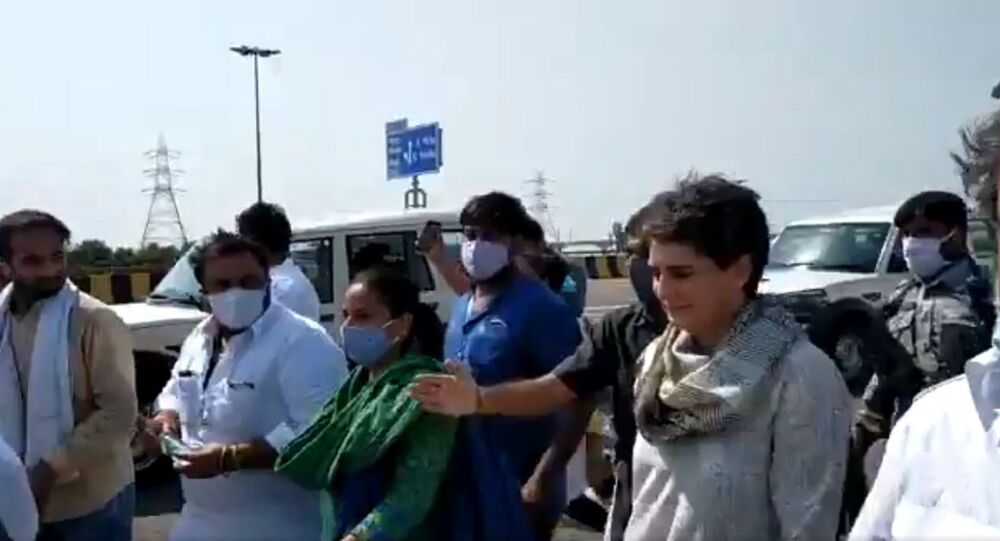 New Delhi (Sputnik): A 19-year-old woman was allegedly raped by four men in the Hathras district of India's Uttar Pradesh on 14 September. While this fuelled huge controversy, the "forceful" cremation of the girl in the wee hours without the consent of her parents further exacerbated the situation in the state.

Amid the huge protests that have erupted in Uttar Pradesh against the alleged gang rape and murder of a girl from a margianalised community, Opposition Congress leaders Rahul Gandhi and his sister Priyanka Gandhi have left Delhi to meet the victim's family despite a prohibitory order in the district.

On their way to Hathras, both leaders were stopped by Uttar Pradesh police at Yamuna Expressway, claimed Congress' student organisation. The video shows Priyanka Gandhi walking out into the road upon her car being stopped at the expressway.

​The Hathras district administration imposed Section 144, an order that prohibits the assembly of four or more people in an area, ahead of Rahul and Priyanka's visit. The administration maintained that it was done to prevent the investigation from being hampered.

Both Rahul and Priyanka, who earlier raised questions about the "deteriorating" law and order in the state, have now asked for state chief Yogi Adityanth's resignation.

Similarly, members of the opposition Samajwadi Party in the state had also staged protests against the incident and the violation of the woman's rights even in her final moments.

​The family of the deceased has alleged that Uttar Pradesh police did not allow them to take the girl's body to her house for "one last time". They said that the police forcefully cremated their daughter when they refused to comply with them and insisted her body be brought home.

The four accused in the rape case have been arrested and state chief Yogi Adityanath spoke to the victim's family and assured strict punishment for the culprits. He has also constituted a 3-member special investigation team that visited the village and launched a probe on Thursday.

The incident took place on 14 September wherein the girl sustained grievous injuries and was shifted to Delhi's Safdarjung hospital. However, she succumbed to her injuries on the night of 29 September, triggering a nationwide uproar.