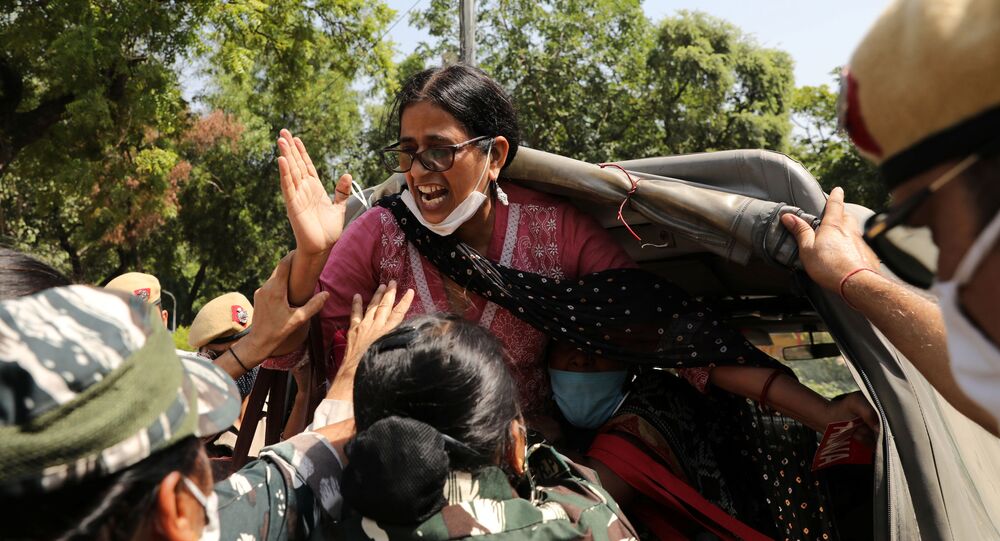 The barbaric rape case that recently disgraced the Indian state of Uttar Pradesh (UP) eventually led to the painful death of a 19-year-old girl who is believed to have met her fateful end because she belonged to a "lower caste". The heinous crime was executed by four men allegedly from an "upper caste" in UP’s Hathras area on 14 September.

In the early hours of Wednesday, the remains of a deceased rape victim were taken back to her Uttar Pradesh village from Delhi, where she breathed her last, but local policemen did not permit her body to be sent home one last time.

Despite constant pleading by her grieving family members, local cops under the Uttar Pradesh government, who regularly make it to the headlines for their questionable work temperament and ethics, did not allow her actual body to reach home, forcibly facilitating the cremation of the deceased girl a little after 3:00 a.m. (local time).

Some heart-wrenching videos from last night have disrupted social networking platforms in India. The videos appear to depict police officers insisting that the last rites be done then and there. When the wailing family did not agree, the police barricaded them inside their home and burnt the body in haste.

#HathrasCase Major ruckus in the village right now. UP cops & officials forcing kin to cremate body overnight. Family begging that let us at least take the girl home one last time. Village people came in front of the ambulance, saying “we will not let you burn our girl forcibly” pic.twitter.com/gHAv4Oq5Yd

​Present on the spot, a sweaty inspector Sanjeev Kumar Sharma from the UP police refused to provide any information to the media, but kept repeating things like: he did not know what was burning in the field, he is not authorised to answer, and that he cannot say what was being set on fire in the back of the frame captured on camera.

ABSOLUTELY UNBELIEVABLE - Right behind me is the body of #HathrasCase victim burning. Police barricaded the family inside their home and burnt the body without letting anybody know. When we questioned the police, this is what they did. pic.twitter.com/0VgfQGjjfb

The victim's younger brother revealed his sister's final wish to be taken back home to famous Indian journalist Barkha Dutt just a short time after the victim succumbed to her injuries and was declared dead after a 10-day fight for her life.

Twitter has been deluged with reactions on what they see as a the victim's disrespectful final farewell by UP cops. #ShameOnYouHathrasPolice is trending on Twitter in India. The state chief of UP, Yogi Adityanath is also drawing severe flak on social media.

We don’t need police in India!!#ShameOnYouHathrasPolice
All they do is just botch up the investigation and either delete the files or close the files!!
They beat common people!!
They are gundas basically!!!
Ye logo ka khyaal ni rakh sakte To Logo ko bhi inki zarurat Nahi hai!!

Shame on humanity..
Shame on UP government.. is this state outside India.. how can a government be so cruel to its people..#HathrasHorror #Hathras #UPPolice #ShameOnYouHathrasPolice https://t.co/CKZFhdj8EJ

#HathrasHorror : victim forcibly cremated by police, family says weren’t allowed to take body home
The police were aggressive when the family refused to cremate her immediately.
I can't imagine this .Such monsters #ShameOnYogi#ShameOnYouHathrasPolice#JusticeForManishaValmiki

​The victim’s grieveing mother kept pleading that her daughter must be taken back home one last time for rituals before she is said a goodbye to forever on a pyre.

Police did nt allow the family of deceased #hathras girl #ShameOnYouHathrasPolice #Manisha body to b taken to her hme but forcefully cremated her at night at 2.45am when her mother kept crying and requesting for her body to see her and do their last rites as per Hindu rites liars pic.twitter.com/LJ2RxQPA8e

​According to various accounts of her statement published in Hindi media outlets, in mid-September the victim was dragged to a farm by her assailants who also tried to strangle her after the incident. A part of her tongue was chopped off, while her spine also suffered a major blow.

© CC0
After Long Legal Battle, India Hangs Four Brutal Rapists, Only Second Execution in Recent Years
All four people named by the victim have been arrested and charged under relevant sections of the Indian penal code, including murder and carrying out atrocities against Dalit or people in the lowest strata of the caste system.

The case has reminded India of the brutal Nirbhaya gang rape that shook the nation back in 2012. The accused in the case were hanged earlier this year after after a seven-year court battle.