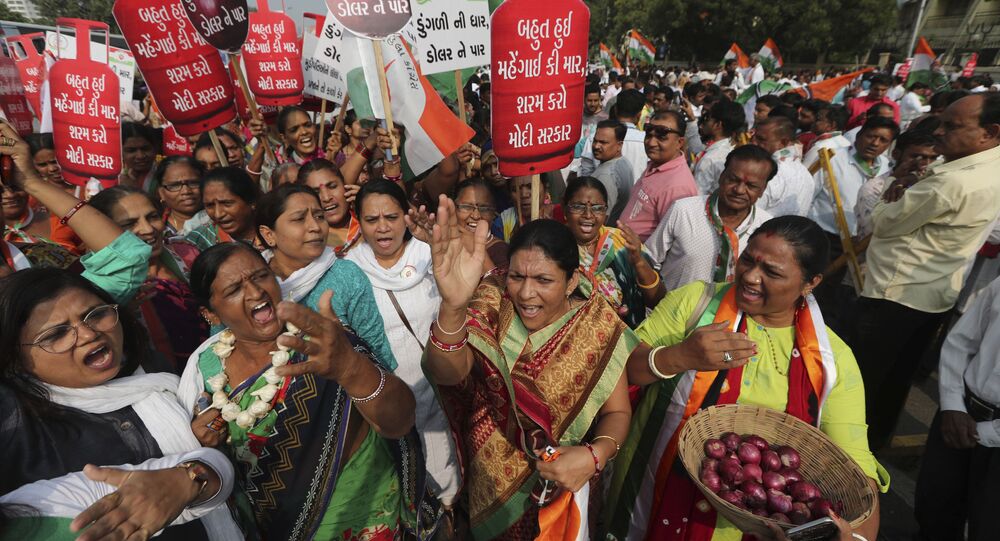 The Indian Parliament passed the Farmers Produce Trade and Commerce Bill, 2020 and the Farmers Agreement on Price Assurance and Farm Services Bill, 2020 last week. The bills seeking to reform Indian agriculture are being criticised by Congress and other opposition parties.

Amid the raging protests by farmers across India, Congress leader Rahul Gandhi has said that new agriculture laws are a "death sentence" for farmers.

Taking to Twitter on Monday, Gandhi said, "The agriculture laws are a death sentence to our farmers. Their voice is crushed in Parliament and outside".

Additionally referring to demands by opposition parties to conduct a division on the bill being set aside by the Rajya Sabha speaker during a debate on the bills on 20 September, Gandhi said that "democracy in India is dead".

The agriculture laws are a death sentence to our farmers. Their voice is crushed in Parliament and outside.

Here is proof that democracy in India is dead. pic.twitter.com/MC4BIFtZiA

Rajya Sabha is the upper house of the Indian Parliament. On 20 September, the bills were eventually passed by an oral vote in Rajya Sabha amid a ruckus from the opposition. In the ensuing melee, lawmakers opposed to the bills came to the well of the house and tore up the house rule book right in front of the speaker. This led to the suspension of eight MPs in the Rajya Sabha for unruly behaviour.

After the monsoon session of the Parliament ended immediately following passage of the bills last week, Congress took to the streets against the new legislation. Last week, Gandhi called them "black laws".

Protests are ongoing against the bills in the agrarian states of Punjab, Haryana, and Uttar Pradesh among others. In fact, earlier today, the protesting farmers set a tractor ablaze at the high-security area of India Gate in the national capital, New Delhi.

​The bills allow farmers to sell their produce at places apart from their designated market regulated by the government. They also facilitate contract farming for farmers, allowing them to enter into supply agreements with private firms.

The opposition's key contention against the laws, meanwhile, is that the government is attempting to replace the age-old system of price assurance through minimum support price and is leaving farmers at the mercy of corporate players, who may have an upper hand in setting the price for agricultural produce.