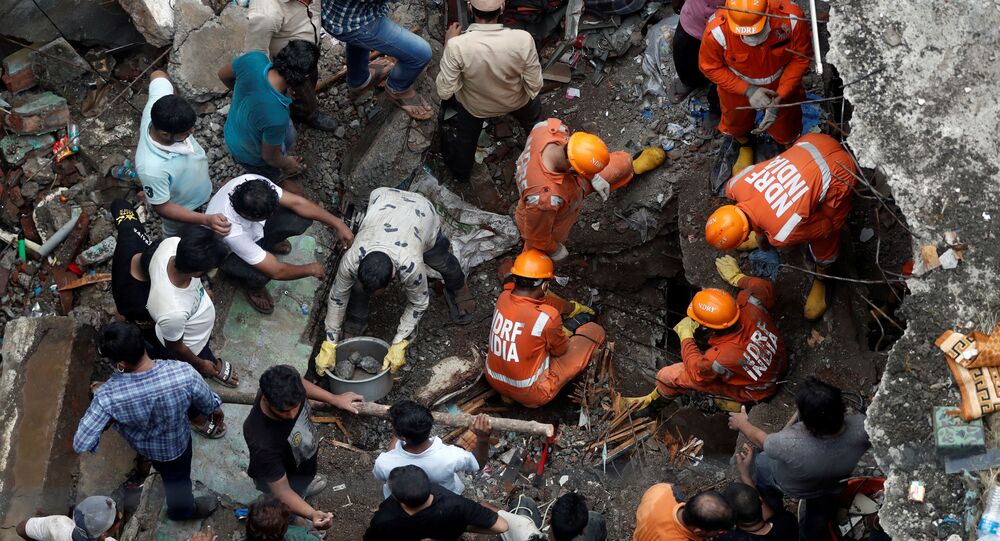 A 40-year old, three-storey residential building collapsed in Bhiwandi, Maharashtra earlier this week. In the early hours of 22 September, the third floor of the building came crashing down on the first, leaving dozens trapped under the rubble.

Three days after a residential building collapsed in the Indian city of Bhiwandi, the death toll surged to 41 on Thursday, with the recovery of 14 more dead bodies from under the rubble during the rescue operations that have been underway since Monday.

18 of the victims were children under age 15, including three toddlers. The corpses, recovered after over 50 hours, are in a horribly decomposed state, local media reported.

© REUTERS / FRANCIS MASCARENHAS
Death Toll From Building Collapse in India Swells to 20 as Rescue Efforts Continue for Over 24 Hours
The 25 people who have been rescued alive are injured and are being treated in local hospitals.

Located around 15 km from Mumbai, Bhiwandi is a densely populated area which is home to over 700,000 people. The collapsed building had around 40 apartments; roughly 150 people lived there.

Prime Minister Narendra Modi has also expressed condolences at the tragic accident that led to the deaths of innocent people.

Saddened by the building collapse in Bhiwandi, Maharashtra. Condolences to the bereaved families. Praying for a quick recovery of those injured. Rescue operations are underway and all possible assistance is being provided to the affected.

​More people are feared trapped or dead under the remains; the National Disaster Response Force (NDRF) team, along with the fire brigade, police officials and neighbours carry on with the rescue operations.

Gut-wrenching images from the site have been surfacing on social media.

Exposed walls, with household items still intact, are seen in what were rooms of a residential building after a portion of it collapsed in Bhiwandi on the outskirts of Mumbai, India. REUTERS/Francis Mascarenhas pic.twitter.com/aJxSMBx2fo