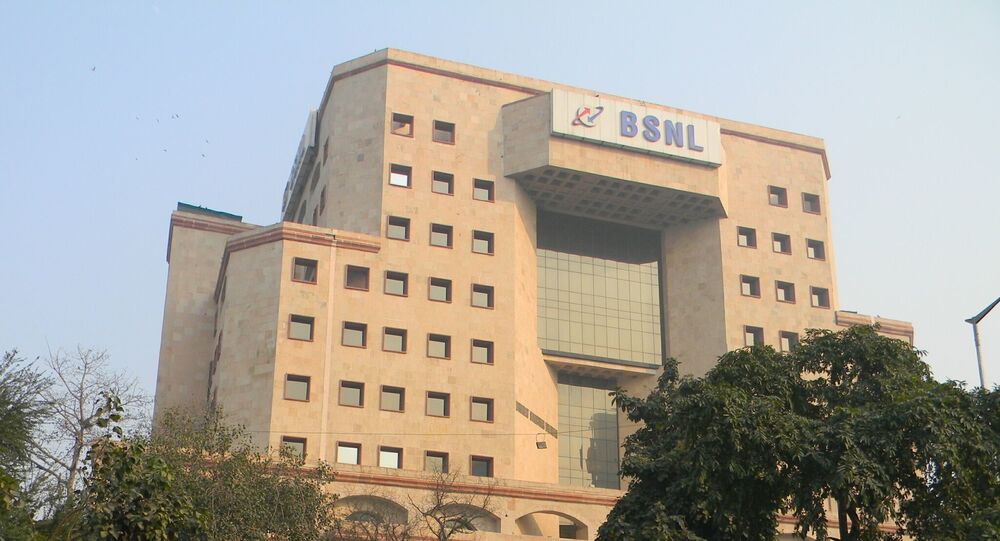 The Indian government said last year that it would turn the state-backed telecom giant BSNL into a profit-making entity by selling off its properties, which are valued at approximately $67 billion. Senior officials from the telecom department say that revenue rules are being flouted in the process, causing a loss of $2.71 billion to the states.

The Indian government’s plan to financially revive the loss-making telecom operator Bharat Sanchar Nigam Limited (BSNL) through the monetisation of its countrywide portfolio of properties has evoked ire among officials from the Department of Telecommunication (DoT).

At least two high-ranking officials from the Department of Telecommunications in the western state of Gujarat and the hill state of Himachal Pradesh have flagged their concerns to Delhi headquarters, as per internal documents reviewed by Sputnik.

The officials have contended that the process of transferring the title deeds of properties owned by the DoT to the telecom operator is not being done ‘legally’ and is in violation of the government’s revenue rules.

According to land revenue rules, transferring of title deeds requires a certain stamp duty which must be paid to the state authorities. In the case of BSNL, an order from the federal government in 2011 had called upon the DoT to adhere to the rules and bear the stamp duty charges.

“BSNL will not have a clear title unless the land is transferred following the prescribed legal procedure. This will later create legal and other problems for BSNL,” read a letter from a DoT official in Gujarat to the BSNL in 2017.

“I further request you to refrain from unauthorised change of title of DoT’s land till final orders are received from the DoT,” said the note.

Over 350 properties in BSNL’s Gujarat circle, formerly in the name of DoT, were transferred to the state-backed telecom company by 2019, as per official records. Sixty-three of these properties are in Amreli, more than 70 in Palanpur, nearly 80 in Junagadh and 51 of them in Ahmedabad.

“If the federal government wants to transfer the title deeds to the BSNL and override their previous orders without paying any stamp duty charges, they must introduce an act in Parliament. However, any such act would also have to be cleared by the state assemblies, since land is a state subject,” explained officials.

At least 7,407 properties across the country had been identified for title transfer, as of 2017. The combined worth of these land parcels is said to be over $67 billion. Officials claimed that the stamp duties on these properties could amount to around $2.71 billion (INR 200 billion), an amount supposed to be borne by the federal government.

Officials told Sputnik that the process of transferring title deeds was expedited in 2016, after a letter from BSNL’s Managing Director Anupam Shrivastava to all the regional heads. “Some of the circles have not altered a single piece of land. The DoT has viewed this seriously,” said the letter.

According to officials, a police complaint was filed in Himachal Pradesh state, where the title transfer is currently under investigation after an order from the District Collector in Shimla. Nearly 55 out of 110 land parcels identified for mutation in Himachal Pradesh have allegedly changed ownership on government records without the payment of any stamp duty, which lies at the heart of the probe.

It has further been learnt that, as of 2019, nineteen properties in the eastern state of West Bengal had also been transferred without proper rules being followed, as per official records. All the properties in the state of Andhra Pradesh, which is part of  BSNL’s Southern Telecom Circle, are understood to have been altered, as of 2018.

Official records showed that ownership of at least 17 properties in the southern metropolitan city of Chennai had been revised before the end of 2019.

When BSNL was formed in 2000, the federal government had assured that it would bear the stamp duty for title deeds transferred from the DoT to BSNL. “The lands are now being illegally (repurposed) through the connivance of some officials. The government wants to sell these properties off or lease them, so they are expediting the process. But it is illegal,” alleged officials.

“This is like official fraud,” alleged one senior official.

Officials noted with concern that a flood of complaints could ensue against the ongoing process once the authorities started to find buyers and lessors for the properties, as part of the revival strategy to raise funds for the debt-laden government company.

Sputnik has contacted federal telecom minister Ravi Shankar Prasad and former chief of BSNL Anupam Shrivastava for a comment on the matter. Their responses hadn't arrived at the time of the publishing of this report.

What is the BSNL revival plan?

The Indian government last year reportedly approved a package of $9.3 billion (INR 690 billion) to salvage BSNL, which has been incurring losses since 2010. As part of its plan, the government had offered the option of voluntary retirement to nearly 100,000 employees working in the company and its wholly-owned subsidiary Mahanagar Telephone Nigam Limited (MTNL), in a bid to offset the losses.