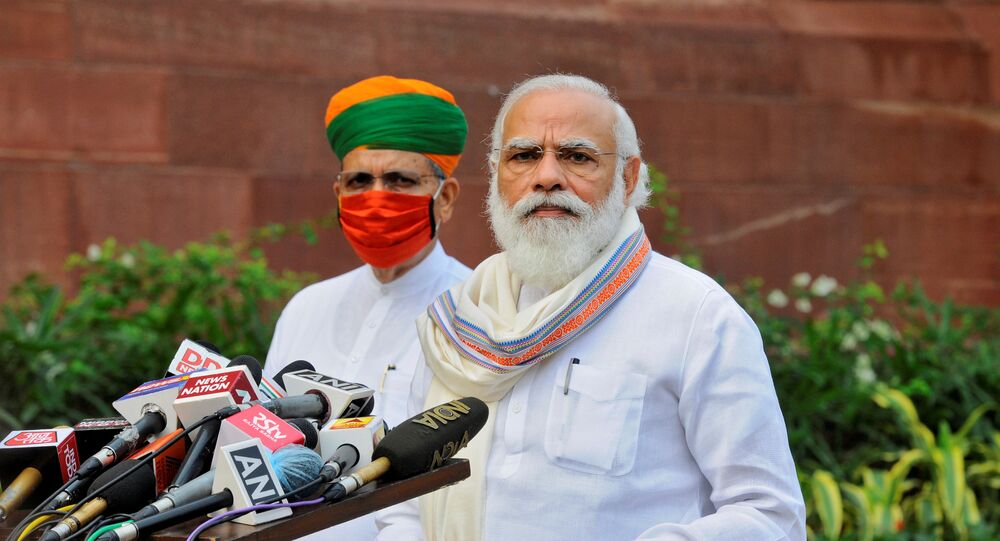 India’s nationalist Bharatiya Janata Party (BJP) government, under the Narendra Modi brand, romped back to power in the general elections in April-May, 2019 with a thumping majority for the parliament’s lower house, the Lok Sabha.

Continuing with his popular image of taking tough, rather risky decisions, Indian Prime Minister Narendra Modi has been sailing through various storms regardless of his party – BJP-- facing occasional setbacks in polls held for State legislatures.

Under Modi, the Indian government has taken several decisions, unprecedented in the independent history of the country, and they were hailed by a huge section of the population and assailed by his detractors.

As Modi appears to be securing his distinct place as Prime Minister of the country, his 70th birthday brings an opportunity to revisit his government’s five key decisions that hold immense significance for Indian voters.

The legislation was a sequel to a judgement by the Supreme Court of India made in August 2017, declaring instant divorce among Muslims as ‘void, illegal and unconstitutional’, and required the federal government to introduce legislation.

‘Talaq’ in Islam means dissolution of marriage when a Muslim man can severe all marital ties with his wife by merely uttering the word ‘Talaq’ thrice.

Abrogation of Article 370 and Bifurcation of Jammu and Kashmir

Jammu And Kashmir State enjoyed a special status among Indian states under Article 370 of the Indian Constitution. The article was titled ‘Temporary, Transitional and Special Provisions’, and was retained by the Constituent Assembly of Kashmir.

It meant that the State enjoyed autonomy to make laws, except in subjects like defence, foreign affairs, communications and currency.

On 5 August 2019, India amended the constitution to abrogate Article 370 and Article 35A, thus stripping the erstwhile state of Jammu and Kashmir of its special status.

Pakistan, which claims Kashmir as well, declared a diplomatic war against India on the issue and suspended diplomatic, communication and trade links. Besides Pakistan, China and Malaysia were vocal in their opposition to the move.

© AFP 2020 / PRAKASH SINGH
From Mispronouncing Names to 'Self-Obsessed Suit': Indian PM Modi's Hilarious Top 5 Gaffes
The Act overtly used religion as a criterion for citizenship under Indian law, inviting violent protests across the country. Despite opposition parties and citizen groups opposition terming it discriminatory against Muslim community, it was cleared through Indian Parliament.

The Modi government introduced legislation to fight terrorism with the passage of the Unlawful Activities (Prevention) Amendment Act in August 2019. The amended act gives sweeping powers to security forces to arrest any person and label him or her a terrorist, without registering a mandatory first information report, charge sheet or jury trial.

The stated objective of the new amendments was to facilitate the speedy investigation and prosecution of terror-related offences.

Following a verdict by the Supreme Court of India on 9 November, 2019 to settle a land dispute between Hindus and Muslims in Ayodhya, a town in the state of Uttar Pradesh, the Modi-led federal government moved swiftly to fulfil one of the BJP’s key poll promises – the construction of a Ram Temple on the spot considered to be the birthplace of Lord Ram.

Prime Minister Modi laid the foundation for the temple on 5 August in Ayodhya, saying: “Ram Mandir will turn into a symbol to integrate India. It will be a unique gift to the world from justice-loving India.”

The groundbreaking was the culmination of a 500-year-old dispute between Hindus and Muslims. Hindus claim Mughal ruler Babur had demolished the Ram Temple and constructed a mosque there in the 16th century.