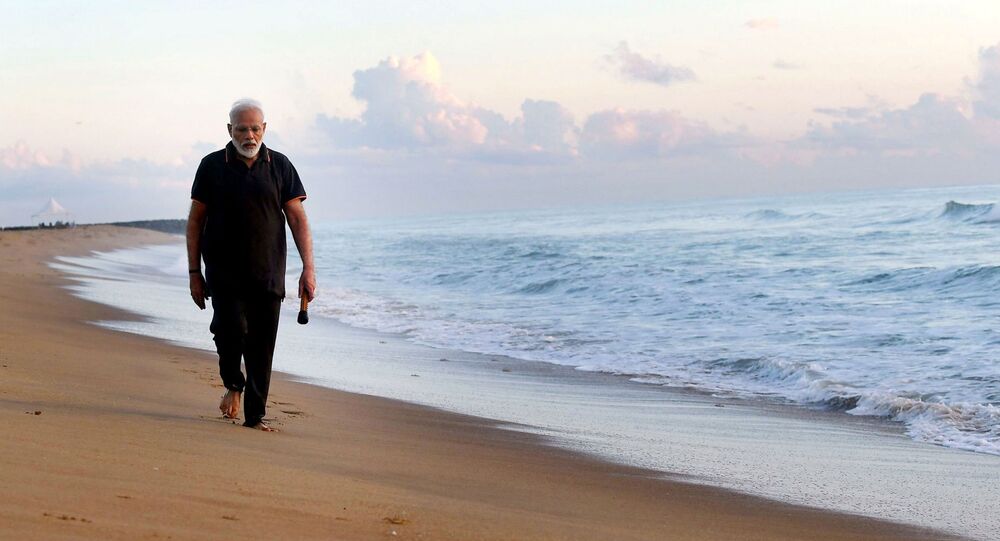 Putin, in his birthday wishes, said that he "values the friendly relations" he has developed with PM Modi and that he looks forward to "continuing constructive dialogue with you and work closely together on topical issues of the bilateral and international agenda".

"From the bottom of my heart, I wish you good health, happiness, well-being and every success," read Russian President Putin's message to PM Modi.

Chancellor Angela Merkel wrote to PM @narendramodi, conveying greetings to him on his birthday. pic.twitter.com/2EKOIyVJrY

"I wish you all the very best in the future - particularly in these unusual times, health, happiness and fulfilment," she wrote in her message, which was shared by PMO on its Twitter handle.

With thousands of mentions already, #HappyBirthdayPMModi is trending on Twitter in India.

Greetings and warm wishes to PM Shri @narendramodi on his birthday. India has benefited tremendously from his astute leadership, firm conviction &decisive action. He has been working assiduously towards empowering the poor & marginalised. Praying for his good health and long life

To the man leading India into its new self .. wishing our dear Prime Minister Modi ji a very happy Birthday.. hoping his vision is guided by sustainable development and protecting the environment legacy for the future of our country #HappyBirthdayPMModi 🙏🏽🙏🏽 pic.twitter.com/GucJPmSGg8

​Each year, Prime Minister Modi marks his birthday with something special. This year, excerpts of one of his old diaries dating back to 1986 were translated into a book, from Gujrati to English – titled “Letters to Mother”; it's set to hit shelves across India.

PM Modi wrote these letters to “Jagat Janni” or universal goddess, while he was still in the process of discovering himself. Explaining the book in one of his previous statements, PM Modi said, "This is not a an attempt at literary writing; the passages featured in this book are reflections of my observations and sometimes unprocessed thoughts, expressed without filter."

Since being elected as India’s Prime Minister back in 2014, PM Modi has celebrated his birthday in different, unique ways.

In 2014, the PM received a gift of INR 5,001 ($68 approx.) from his mother on the occasion of his 64th birthday, all of which he donated to the Jammu and Kashmir flood relief fund as a gesture of good will. That same year, PM Modi also hosted Chinese President Xi Jinping for dinner in his home state Gujrat.

In 2015, he visited ‘Shauryanjali’ -- a military exhibition, to mark the golden jubilee of the Indo-Pakistani War of 1965 for his 65th birthday. That year, a 365 kg “laddoo” – traditional Indian sweet – was specially made for the man of the day.

The following year, the Navsari district in Gujarat lit around a 1,000 lamps simultaneously to mark Modi’s birthday, who visited the state to distribute aid to special needs people.

For his 67th birthday in 2017, Modi dedicated the Sardar Sarovar Dam project to the country amid chanting of Vedic hymns by students.

While in 2018, Prime Minister’s 68th birthday was celebrated among school students in India’s spiritual capital, Varanasi, in 2019, a bakery in Surat, a city in Gujrat, designed a special 700-ft cake to wish Modi a happy 69th birthday.

Just like all these previous years, in 2020 India’s ruling Bharatiya Janata Party (BJP) stuck to the tradition of dedicating Modi’s birthday week to a social service called “Seva Saptah”. During the week, BJP workers across the country participated in cleanliness and plantation drives among other activities.

On the occasion of Honourable Prime Minister Shri.Narendra Modi ji's 70th Birthday, SEVA SAPTAH is being followed.
Started the cleanliness drive along with Our MLA Shri Sunil Rane and with nagar Sevak Anjali Khedkar and Shiva Shetty for Gorai Borivali @narendramodi @SunilRaneBJP pic.twitter.com/BwjzoFsaoc