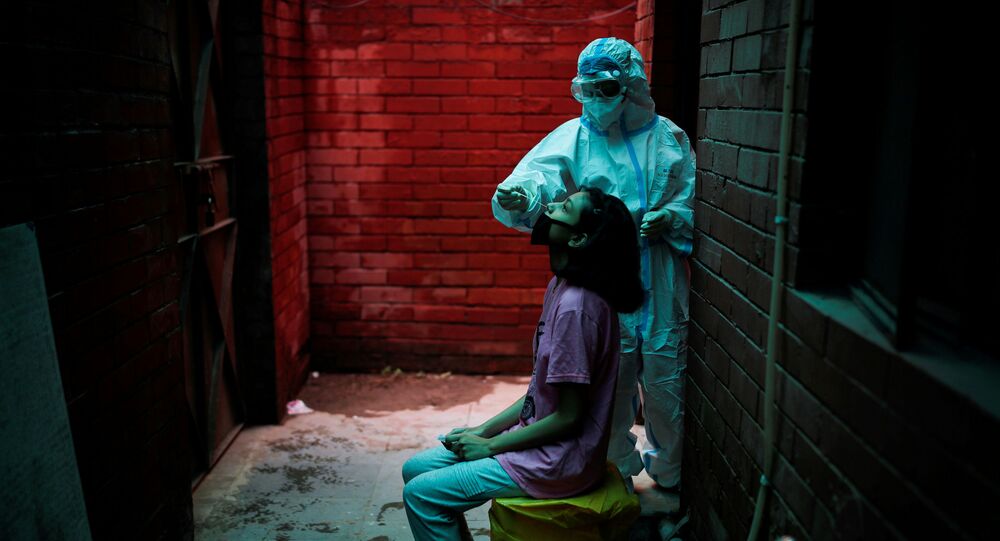 The number of COVID-19 cases in India is consistently rising, despite the enforcement of one of the strictest and most prolonged lockdowns on the planet. India has now topped Brazil with at least 4,562,414 cases. The US remains in the lead, however, with the highest number of infections: 6,589,020.

India has seen a record surge in cases in the past several days, with a daily caseload expected to top 100,000. Community health experts have expressed concern over the surging cases and seek effective measures to slow the spread of the deadly disease.

Sputnik talked to Professor K. Srinath Reddy, president of the Public Health Foundation of India, a public-private national health initiative, on the blowback from the unabated increase in COVID-19 cases, the possible reasons and current containment measures.

Sputnik: India’s burden of COVID-19 is increasing. In a couple of days, the daily caseload is expected to top 100,000. The silver lining is there are a higher percentage of people surviving as over 77 percent have regained their health, while the mortality rate is low. When do you, personally, expect the curve to flatten?

Professor Srinath Reddy: First, are we talking about one curve for the whole of the country, or different curves for different regions of India? We are looking at a country which is larger than all of Europe. Different places are becoming affected at different times. For example, Bihar and eastern Uttar Pradesh started off later than Delhi and Maharashtra. So we will get different curves. For all of India, for cases to come down, it may take a few more months.

We are getting more and more areas getting affected. The virus is spreading faster and farther.

Sputnik: Is thetre increased concern that the numbers are rising too quickly?

Professor Srinath Reddy: It is worrying, but fortunately the mortality rates are not high. Even a fraction of people becoming affected is worrisome, in terms of deaths. The overall death rate, in comparison to Europe and North America, is much less. It is similar to other South Asian countries, though Bangladesh and Pakistan have done better than us in terms of reported death rates. But this is a worrisome fact we have to keep in mind, because if rural areas get badly affected, that would be a matter of concern.

Sputnik: What do you think are the reasons for this surge, particularly recently?

Sputnik: Would you advocate punitive actions against those who violate guidelines?

Professor Srinath Reddy: I would say, punitive action should be taken against people who organise such gatherings. For individual violators, there are a lot of issues involved, like education and behavioural change; you cannot always hold them guilty.

Sputnik: Is the increase partially due to the rise of 'pandemic fatigue' in a prolonged lockdown?

Professor Srinath Reddy: There is no doubt about the fatigue factor. That is everywhere in the world, but we have to do it in a gradual manner. When the pendulum swings from one extreme to another extreme, there is a problem. We should have gone for lockdown in a selective manner, like China, which did not go for a national lockdown. They enforced lockdown only in places where the infection spread but prevented domestic travel and they managed it. If we had done that for our big cities, where the virus started appearing in February last, and allowed economic activities to continue elsewhere, there was no need for a general, national lockdown, but a calibrated or phased lockdown.

Sputnik: Do you suggest that a calibrated lockdown could have saved us from the economic fallout of the full lockdown?

Professor Srinath Reddy: Exactly. In April, even during the lockdown, we allowed farming operations, which means they were not at great risk. We could have done the same thing in a segmented, localised manner.

Sputnik: Do you believe cases will continue to spread until we have an effective vaccine?

Professor Srinath Reddy:  Cases will continue to spread and we have to live with the fact that the virus is never going to disappear. It will become like other coronaviruses, but it may become much milder.

Sputnik: There are three vaccine candidates in India at different stages of trial and one of them, Covidshield, developed by AstraZeneca, had to stop its trial. Are such actions normal in the development of any drug or vaccine?

Professor Srinath Reddy: Any drug trial or vaccine trial has what is called a Data Safety and Monitoring Board (DSMB). The DSMB is activated if there is any adverse event during the drug trial. Then they break the code, because the randomisation code does not indicate who was given the vaccine and who was given the placebo. They break the code and do an interim analysis.

The trial can be stopped prematurely either because of adverse effects or succeeding very well. It’s not uncommon.

Sputnik: That doesn’t mean that the efficacy of the vaccine is under doubt?

Professor Srinath Reddy: A vaccine could be very effective but could be harmful because, remember, unlike in normal circumstances, where you give it to an unhealthy person, here you are actually giving it to a healthy person, which calls for all the more responsibility to prevent side effects.

India, as of Friday morning, had a caseload of 4,562,414, while at least 76,271 people have died, according to the most recent data released by the federal Health and Family Welfare Ministry.