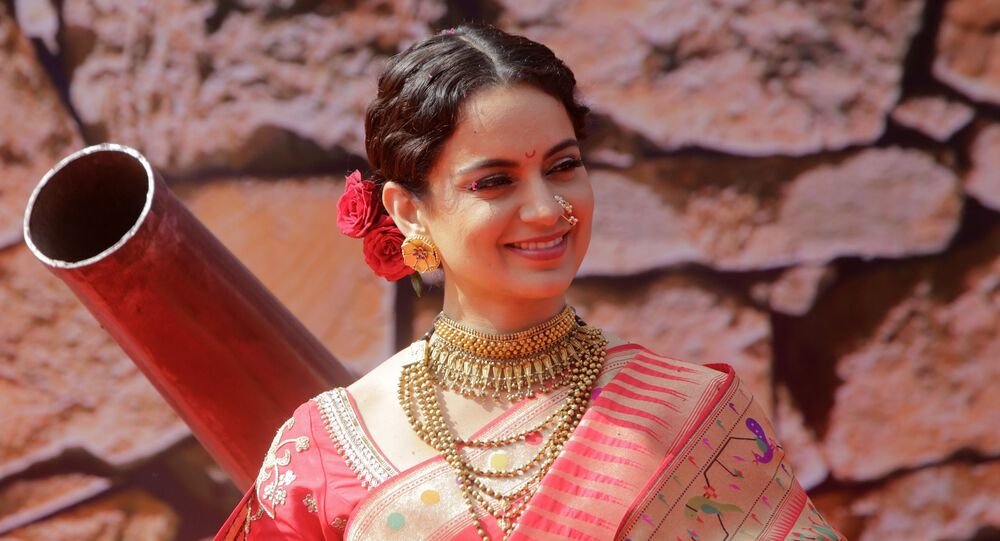 After lashing out at Maharashtra State Chief Uddhav Thackeray over the partial demolition of her Mumbai office on Wednesday despite her lawyer filing a legal notice for the authorities to desist, Bollywood actress Kangana Ranaut has hit out at the Congress Chief for not getting involved on her behalf.

The demolition of Kangana’s office came at a time when the actress has been involved in a war of words with the state’s ruling party Shiv Sena and its leaders over a number of controversial remarks, including one in which she draw parallels between Mumbai and what she described as "Pakistan Occupied Kashmir".

In a slew of tweets, Kangana has asked the Congress chief to break her silence and intervene in her office demolition case.

Dear respected honourable @INCIndia president Sonia Gandhi ji being a woman arn’t you anguished by the treatment I am given by your government in Maharashtra? Can you not request your Government to uphold the principles of the Constitution given to us by Dr. Ambedkar?

Referring to the Italy-born Sonia Gandhi, who became an Indian national by marrying Rajiv Gandhi, the late former Indian prime minister, Kangana said, “You have grown up in the west and lived here in India. You may be aware of the struggles of women.”

Urging Sonia to break her silence, the actress tweeted, “History will judge your silence and indifference when your own Government is harassing women and ensuring a total mockery of law and order. I hope you will intervene.”

You have grown up in the west and lived here in India. You may be aware of the struggles of women. History will judge your silence and indifference when your own Government is harassing women and ensuring a total mockery of law and order. I hope you will intervene 🙏@INCIndia

​Targeting State Chief Uddhav Thackeray, Kangana posted a 30-second video clip of an interview of the late Bal Thackeray, the father of Uddhav and the founder of Shiv Sena -  who had once said that he “doesn’t like elections and groupism”.

Pointing to this, Kangana tweeted that “his biggest fear was some day Shiv Sena will do Gutbandhan (alliance) and become congress.”

On Thursday, Kangana accused Shiv Sena of compromising its ideology and transforming into ''Sonia Sena" (or, a party of Sonia Gandhi while setting aside Shiv Sena’s ideology).

Because of these petty crimes that they do @Dev_Fadnavis ji must have suggested that BJP does alliance with them, one must never succumb to bullies, after loosing elections ShivSena shamelessly made milavat sarkar and turned in to Sonia Sena. https://t.co/1LluCIaWib

​While all this has heated the political row, many people have been reacting to the controversy by attacking both Shiv Sena and Congress, saying it’s a waste of time to seek help from them on this matter.

Why u requesting them ? Today India no need of this party .. This party is shameless .. It's not a Indian party .. In conflict with china or Pakistan everybody in confusion that this party with India or with enemy . So please today congres party have lost the believe in citizen.

Kangana this is ur own battle. U will only get the support of ur fans. Asking political parties and hot shot bollywood to support can only be ur dream. None will come out to support u as they r worried about their own lives, property and skeletons hidden in their closets

​Multiple complaints after her video statement

After the partial demolition of the alleged illegal construction at her Mumbai office on 9 September, Kangana reacted through a video message in Hindi, saying: “I now understand how Kashmiri Pandits felt after their property was vandalised (during the exodus of Kashmiri Hindus in the late 1980s and early 90s from the valley)”.

The reaction was in relation to Kangana being warned by a ruling Shiv Sena politician to better not come if she views Mumbai as “Pakistan Occupied Kashmir”, a local Indian reference to the Pakistan-administered side of Kashmir.

She later slammed State chief Thackeray and said, “Do you think that you along with the film mafia broke my house and took big revenge? Today my home is broken, tomorrow your ego will be broken. This is the wheel of time. Remember this. It doesn't always remain the same."

One of the complainants said that Kangana's comparison of the demolition of her office building with the plight of Kashmiri Pandits was an attempt to disturb communal harmony.

In the video clip, Kangana referred to the state chief as "tu" (you), which sparked another complaint that called the choice of word an attempt "to diminish the character and challenge the dignity" of the Maharashtra Chief.

So in Mumbai, ‘tu’ is an abuse and ‘haramkhor aka naughty’ is what drips off an angelic tongue! How many self goals will the dolts score? @KanganaTeam needs to do nothing because when someone is so stupid, you must allow them to complete the circle of life.

On Wednesday, Kangana claimed her office demolition was carried out even though the Bombay High Court had stayed all demolitions until 30 September.

​Her attorney Rizwan Siddiqui revealed that Shiv Sena-led Mumbai’s civic authority BMC (Brihanmumbai Municipal Corporation) which carried out the demolition, didn’t stop despite him informing the officials that the move was in violation of regulations.

​After the actor filed a petition at the Bombay High Court challenging the civic body's move, the demolition was called off. The court said that "prima facie (the demolition) does not appear to be bonafide".

The next court hearing is scheduled to be held on 22 September.