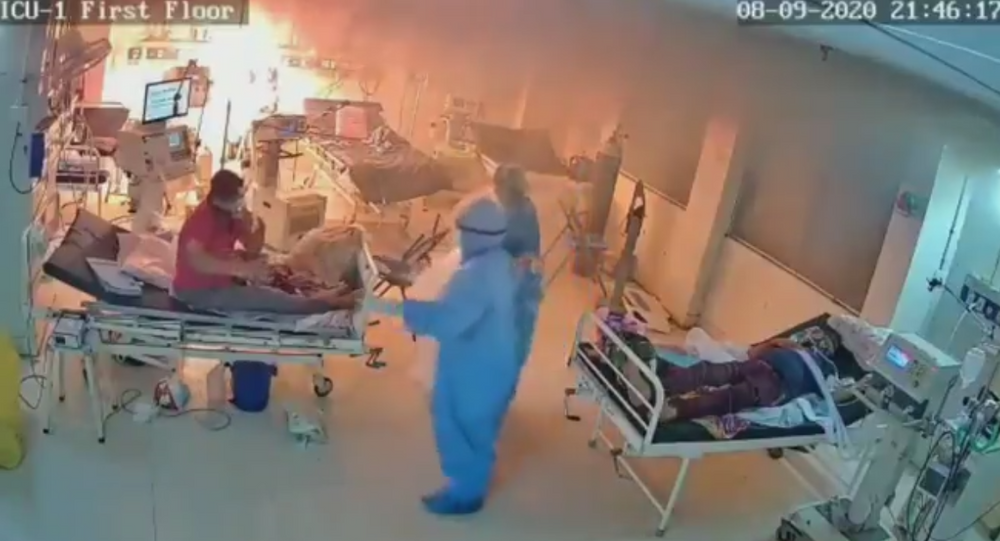 The ventilator that caught fire and exploded in Gujarat’s biggest public hospital is reported to be a Dhaman-1 ventilator, which was at a centre of a "fake ventilator" scandal. A four-member committee has been appointed to probe the incident and determine the reason for the blaze.

Days after chaos and panic ensued in the intensive care unit of a COVID-19 hospital in Gujarat, CCTV footage has revealed the horrifying moments when a ventilator burst into a fireball of flames and exploded.

The ICU had four critical patients when the alarm went off and the ventilator caught fire. Three doctors dressed in hazmat suits remained calm, as they rushed the patients out of the ward one by one.

The footage shows a doctor evacuating a patient, who was visibly unable to stand on his own, taking him away from the flames.

The fire broke out after the spark in 'Dhaman' ventilator.

'Dhaman' ventilator was in controversy calling it 'Fake ventilator ' pic.twitter.com/KD0fp2kuDu

​Soon the fire raged to luminous orange on one side of the ward while a woman doctor evacuated another elderly patient.

Within seconds, thick smoke filled the ward with two patients still inside. However, a doctor managed to douse the flames with the help of an extinguisher, preventing a major fire from breaking out at the hospital.

The incident happened in SSG Hospital’s ICU unit, on Tuesday night (8 September). The authorities still have to ascertain if the fire started from the ventilator or through an external source.