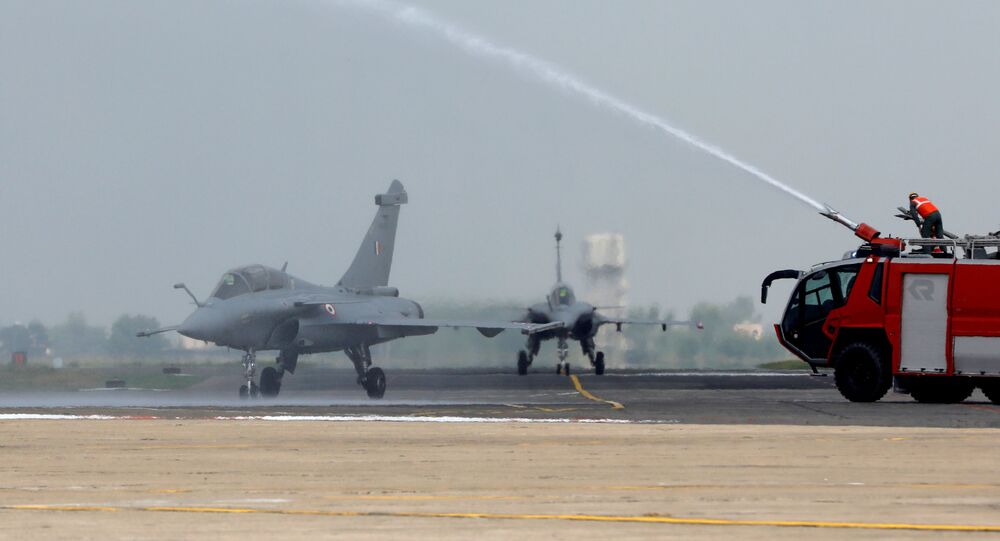 As the situation at the border with China remains heated due to a stand-off in Eastern Ladakh, India's air force welcomed five French-made Rafale fighter jets with a formal induction on Thursday. The situation has turned tense after a 7 September incident when shots were fired along the border for the first time in decades.

Indian Defence Minister Rajnath Singh has called the induction of five Rafale fighter jets into the Indian Air Force an “important step in light of the prevailing security conditions” that “have been created along India’s borders”.

Making an oblique reference to the current border stand-off with China, Singh said: “The induction of Rafale is a strong message for the world and especially for those who challenge India’s sovereignty”. Emphasising the multi-role capabilities of Rafale, Singh said the fighter jets can perform a variety of tasks including air superiority missions and precision strikes against enemies.

Attended the Rafale Induction Ceremony along with French Defence Minister Ms @florence_parly in Ambala today. Her presence in the ceremony is a reflection strong India-France defence partnership. The induction of Rafale fighter jets in IAF is a big & momentous occasion for India. pic.twitter.com/ENwpXxXHAK

India in June urged France to ensure the delivery of the first batch of Rafale jets by July. But the delivery was delayed due to a halt in production due to the COVID-19 lockdown.

© CC BY-SA 4.0 / Aksveer / Rafale at Aero India 2017
France Affirms its Commitment to Ensure Timely Delivery of Rafale Jets, Indian Defence Minister Says
Expressing support for India during the induction ceremony on Thursday, French Armed Forces Minister Florence Parly said that with the Rafale aircraft “in strategic terms, India will have an edge over the entire region to defend itself and protect its people”.

France offered “steadfast and friendly support” to New Delhi when 20 soldiers of the Indian Army were killed during a violent face-off with People’s Liberation Army troops on 15 June.

India-China border tensions began in the last week of April when India accused Chinese troops of crossing the Line of Actual Control. This was followed by an altercation near the Naku La sector (near the Muguthang Valley) in Sikkim and another face-off in Ladakh. Soldiers from both sides sustained injuries.

The two sides were holding military level talks to diffuse the border situation when the violent face-off occurred in June, resulting in a heavy military build-up on both sides of the border.

In the last 10 days, India and China were involved in another skirmish in the Chushul valley, and shots were fired along the border for the first time in decades. Satellite images continue to show massive military build-up in the north and south of Pangong Tso in the Eastern Ladakh sector.

Last week, defence ministers of both the countries met in Moscow on the sidelines of Shanghai Cooperation Organisation defence ministers’ meet but this did not result in any lessening of tensions at the border. India’s External Affairs Minister S Jaishankar is believed to be set to hold bilateral talks with his Chinese counterpart Wang Yi in Moscow.