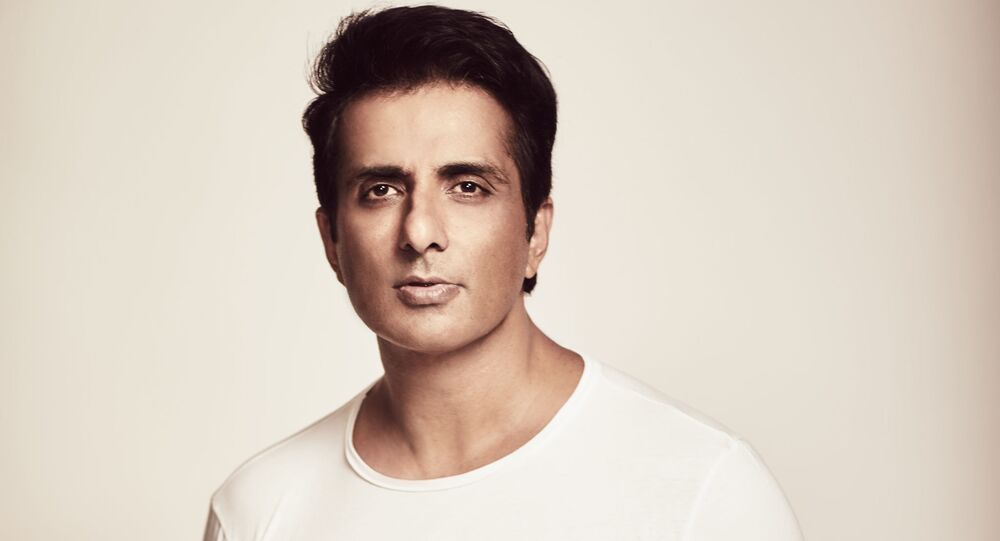 From distributing food packets to the needy to arranging vehicles for the return of national lockdown-hit migrants to their hometowns, he did it all and became a social media sensation. Bollywood actor Sonu Sood today has acquired a new image, that of being a real-life "Superhero" by serving those less fortunate.

As a youngster, Sonu Sood wished to be an engineer, but destiny took him to Bollywood. As COVID-19 kept his fellow countrymen homebound, the actor chose to dedicate himself to the cause of helping others in need. Meet Bollywood’s real superhero Sonu Sood who is making a big difference in many financially-hit lives.

Known for his films like Dabangg, Jodhaa Akbar, and others, Sonu Sood is actively working to resolve people’s problems in these financially stressful times.

When a pan-India lockdown was declared on 24 March to curb the spread of COVID-19, an unknown number of people lost their livelihood and they became helpless as migrants living in big cities were even unable return to their hometowns.

For many migrants, they had hardly anything to eat. It evoked an emotive public response to watch such families struggling to return to their native villages, carrying kids and luggage. Instead of just being another onlooker, Sonu tells Sputnik that he opted to come forward and help.

Driven by the prevailing crisis and inspired by what his parents taught him while bringing him up, Sonu opened the doors of his hotel to the medical staff working in the pandemic.

Talking to Sputnik, he says: “My parents taught me that you will only be considered successful the day you help someone selflessly who isn’t expecting anything from you. I’m really grateful to my parents for making me capable of giving back to society. I feel a sense of responsibility to do everything to save a life, help them get educated and empower them by fulfilling their needs".

His efforts for migrant workers have literally turned into a major social movement, prompting a huge number of people to open up and seek help.

“Almost 3 million people every day write to me with their requests and around 80,000 messages on social media. My email gets flooded with 6,000 -7,000 new mails daily. I wake up at 7 a.m. and my phone never stops buzzing. With all the follow-ups and coordination to ensure their request is fulfilled, my brain goes for a toss. It’s the toughest yet satisfying job ever in my life", he says.

He shares that there are around 10 surgeries happening every day sponsored by him and he has constructed houses for people who lost their homes due to floods in the country’s northeastern region.

He even arranged for phones for those kids who needed them for online studies or asked for books or shoes for an athlete who couldn’t afford it.

On another occasion, he arranged a tractor for a farmer who was using two daughters to help him plough in the field. He has opened up the Sood Foundation and aims to work on a sustainable model to help out more people.

This family doesn’t deserve a pair of ox 🐂..
They deserve a Tractor.
So sending you one.
By evening a tractor will be ploughing your fields 🙏
Stay blessed ❣️🇮🇳 @Karan_Gilhotra #sonalikatractors https://t.co/oWAbJIB1jD

Sonu launched a job hunt app – Pravasi Rojgar to help them get employment and it currently has 10 million people registered. “If you can give someone employment and education, that’s the biggest way to give back to the family", Sonu tells Sputnik.

As gratitude, a man, whom he had helped in returning to his hometown, has named his newborn after Sonu Sood. Many people have even started naming their businesses after him.

I will soon come and visit you guys❤️ you will inspire the nation. 🇮🇳 https://t.co/BTARu7G07e

Inspired by his noble causes, villagers from Vizianagaram, Andhra Pradesh, built a road themselves after suffering neglect from government authorities to do it for years.

“This was mind-blowing! The village had no roads and nobody was listening to their request. Migrants, who safely went back to that village, said if Sonu Sood can do so much, why can’t we? They pooled money (about $30 dollars each) and made a road in the village. That’s the biggest gift that they could give to the village. I think the whole country is changing and realising that they can do their bit. All we have to do is go all out and put things together", Sonu tells Sputnik.

There were many moments that brought tears to his eyes and the feeling, he says, “can’t be expressed in words”.

“The best moment was when I was at a bus stand or railway station to see them (migrants) off. They waved their hand and shouted ‘Thank You’. There were many people who came up to me to express gratitude. It was an unreal moment for me and that inspired me to do more and more", Sonu tells Sputnik.

Before starting shooting for his upcoming movies, he will be launching a big project to sponsor the education of those children and students who cannot afford further studies.

“Through this initiative, millions of people will be able to get an education. It’s a change that will travel through generations. A person who never got a chance to become an engineer and doctor, today if I make his/her dream come true, his next generation will change for good", Sonu shares.