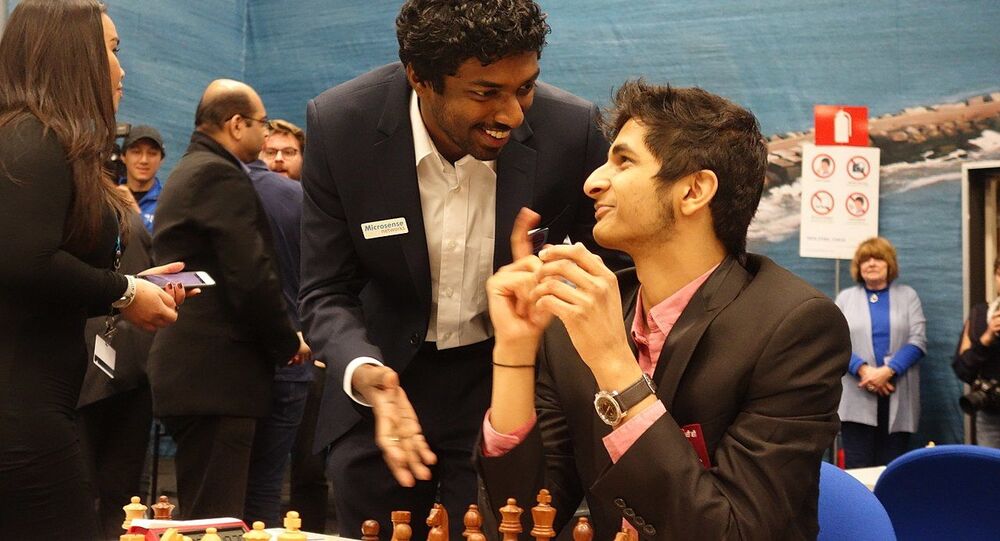 Would Have Given Our Best Shot to Win: Indian Captain After Jointly Bagging Chess Gold with Russia

New Delhi (Sputnik): FIDE held the Chess Olympiad online for national teams on 25 July. Over 1,500 participants and 163 teams from across the world participated. It saw India win its first ever gold medal in the history of the tournament. India's previous best here was was a bronze medal in 2014.

A day after Russia and India were declared joint winners of FIDE Online Chess Olympiad following a technical problem on the internet, Indian captain Vidit Gujrathi on Monday said the team would have given its best shot in the game to win the gold for the country despite an internet server malfunction.

“It was the first ever final for us (India), these things  (internet issues) happened during the initial stages of the tournament as well. The team has done the hard work throughout the tournament and would have given their best shot in the game to win the gold for the country,” the Indian skipper told Sputnik on Monday.

The event was being played online due to the Covid-19 pandemic.

On Sunday, the officials had initially declared Russia as winners after two Indian players - Nihal Sarin and Divya Deshmukh - ran out of time in the final after a technical snag saw an internet disconnection.

But following an investigation, FIDE President Arkady Dvorkovich decided to declare Russia and India joint winners and awarded gold medals to both teams.

Dvorkovich is a Russian official, who previously served as Deputy Prime Minister in Dmitry Medvedev's Cabinet (2012 to 2018).

India drew their first round against Russia at 3-3. India initially had the upperhand, but Russia fought back from a couple of very tough positions.

In the second round, two Indian players Nihal Sarin and Divya Deshmukh lost their internet connections and had to forfeit their matches. After Koneru Humpy also faced some internet issues as she lost vital seconds due to an internet malfunction the Indian team appealed to the officials.

Captain Gujrathi expressed said: “It’s a historic moment and I’m glad that I got the opportunity to play and captain the side. All the teammates had an equal hand in making the country proud. It felt really great to see around 74,000 people watching the event live online.”

Koneru Humpy said it was a proud moment for all Indians: “It was a wonderful performance by the whole team and we had amazing games. In the preliminary round we managed to beat a chain of one of the strongest teams. Yesterday  (Sunday) was also a very crucial match against Poland as we lost our first set and all our main players like Vishwanathan Anand, Vidit, Harika and I managed to beat, so that game was a chance to play tie breaks and I am happy that I got the opportunity to play the Armageddon game and make it to the finals,” she explained.

Meanwhile, the former world champion Viswanathan Anand said that he was thrilled with the result: “I think in the whole Olympiad the Indian team has shown a lot of spirit. Especially, I can say that in this medal the biggest contribution came from the youngsters, which shows that we have a bright future for chess in India. I am just very very happy to get this gold medal."