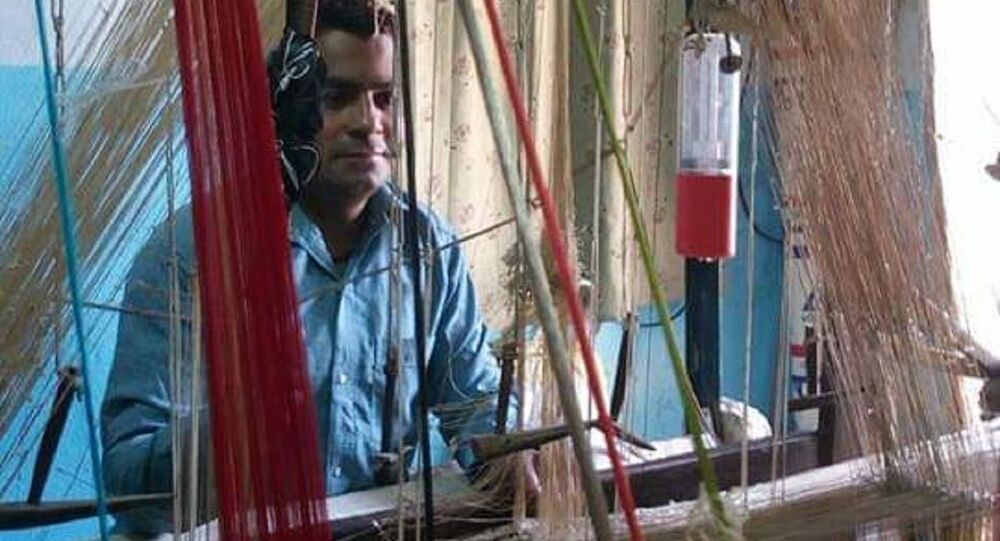 New Delhi (Sputnik): As India tries to bounce back from an unprecedented lockdown to contain the spread of the coronavirus, Indian Prime Minister Narendra Modi has called for a "Self-Reliant India (Aatmanirbhar Bharat)". In the meantime, the Ministry of Textiles has abolished all Indian handicrafts and handloom boards.

Glossy, transparent, lightweight, and shimmering texture defines the Chanderi fabric, produced by weaving silk and golden Zari in traditional cotton yarn, with colourful motifs embellished on them via a needle and handloom. But the makers of this luxurious fabric have seen the darkest days of their lives under the lockdown.

This is not the first time that weavers in Chanderi, Madhya Pradesh have faced losses due to a calamity but Mohammad Dilshad Ansari, a national award-winning weaver, shares how the community was caught off-guard by the announcement of a lockdown on 24 March.

"We couldn't understand what it (the lockdown) was. We didn't know if there would be any arrangements or not. Whenever there are floods, which there are every year, we are prepared for it. But with this lockdown, within a week raw material was stopped, retailers cancelled their orders. The work came to a complete halt", says Ansari, who makes a hand-to-mouth living like daily wage earners and was left to fend for himself under the lockdown.

India's many centuries-old weaving industry is the largest in the world and comprises different hand-woven fabric from each state such as Kosa Silk from Chhattisgarh, Muga Silk from Assam, Lepcha from Sikkim, and Panja Durries from Haryana as well as many others.

© CC BY 2.0 / Basharat Alam Shah / Dal Lake Shop/store
Makers of Luxury Pashmina Shawls Struggle to Survive in Kashmir
In 2015, the Modi government decided to pay tribute to weavers with National Handloom Day on 7 August, which also marked the anniversary of the Swadeshi movement in 1905, or the boycotting of foreign goods and relying on Indian-made products.

The calls for promoting local businesses and handicrafts reverberated across the country with the call for a boycott of Chinese products due to a border standoff, which was followed by the government’s announcement of the Self-Reliant India (Aatmanirbhar Bharat) mission.

However, the government's announcement of self-reliant India seems to have fallen flat when it comes to the nation's second largest employer after agriculture, with 3.5 million in handlooms and over 700,000 in crafts, according to the 2019-20 National Census of Handloom Weavers.

The decision has riled people who are invested in promoting the handloom sector. The board, with 88 non-institutional members, comprised of weavers and artisans from all over the country, was the only forum where the government could get direct feedback from stakeholders.

The board was assigned the task of advising the government on policymaking recommendations to make the handicraft sector an effective instrument for reducing unemployment, and to preserve and promote Indian handicrafts.

Talking over the importance of the board, designer Rina Singh, owner of Eka, an independent label known for its custom-woven fabrics by hundreds of weavers, spinners, and dyers from craft clusters across India, tells Sputnik that the board held importance for the purpose it was created for but over the years, the structuring, the deliverables, and the exact working of the boards was not supervised, resulting in boards becoming just messengers and static bodies with little impact on the ground.

She emphasises that the boards were the first to be connected with the weavers and there is a dire need to have a body which has direct contact with the artisans with the necessary powers vested in them to bring about change.

Considering the current economic slowdown and widespread impact of the lockdown, Sputnik asked the Ministry of Textiles if there are measures in the pipeline to bring artisans in to formulate policies to uplift the sector, especially after the abolition of the board. However, the ministry did not answer any of the queries addressed to handloom secretary.

No Gov’t Outreach Under Lockdown

Manish Chippa, owner of Sigma Hand Print, from the remote village of Akola in the Chittorgarh district of Rajasthan, had 15 workers before the lockdown at his workshop. While he managed to sustain them for some time with whatever money he had, he eventually had to let go of some with no business in sight.

Chippa, who handprints saris, says there has been no support from the government, especially when he received nothing from January and March. The government has not issued any guidelines or schemes to help the artisans sail through the crisis.

Ansari also shared that he contacted the government but to no avail. He says: "I called up Bunkar Sewa Kendra in Indore, under the Ministry of Textiles, several times but they did not help. They always said the government will do something but nothing has been done yet".

While Ansari was helped by Dastkar, a society for crafts and craftspeople, in selling his products from the pre-lockdown period and arranging for the raw material, another social enterprise working in the area of textiles and fashion Indi Cult brought together weavers and artisans from across the country to organise an online exhibition called Quarantine Craft Store to help these workers.

Stressing a bottom-up approach, Sharika Bhan, who founded Indi Cult with partner Meenu Venkateswaran, believes that in order to help weavers, artisans, and craftspersons efforts need to begin at the grassroots level, state level because of the size of the industry, which is spread across rural areas of the country.

She says: "There are tribals, artisans, and handicraft workers in remote parts and it is necessary to collectivise them so that they get basic structure of inventory management and using resources, especially in the time of a crisis".

Our Indigo saree with a contemporary denim look. @nainabee strong and serene in our Indigo Mul #MoodIndigo

While the Ministry of Textiles and the government are only making noise for "Vocal for Local" and "Self-Reliant India" on occasions like Handloom Day by wearing a Khadi or other hand-woven fabric, the Crafts Council of India, Dastkar, Dastkari Haat, and other private players are paving the way for sales of small artisans.

Meanwhile, calendarised exhibitions by the government have been cancelled and no other alternative has been announced. As per the India Brand Equity Foundation, the National Handloom Development Programme has been allocated $55.55 million (Rs 388.21 crore).

Locked Down Due to COVID-19, Indian Fashion Designers Find Silver Lining in Their Passion