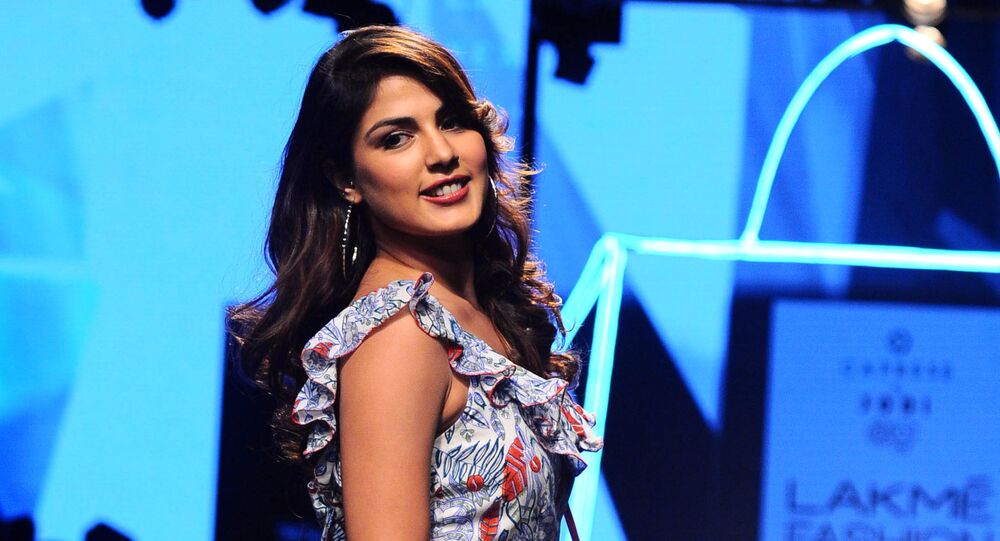 New Delhi (Sputnik): Bollywood actor Sushant Singh Rajput was found hanging to the ceiling fan at his apartment in Mumbai on 14 June. Three federal investigating agencies - the Central Bureau of Investigation, Enforcement Directorate, and Narcotics Control Bureau are probing what led to his death in his Mumbai flat.

Bollywood actor Sushant Singh Rajput’s ex-girlfriend Rhea Chakraborty has demanded police security for herself and her family, claiming there have been threats to her life. Chakraborty, who is the main accused in Sushant's suicide case, showed on social media how people are thronging her residential building.

In an Instagram post, Rhea demonstrated how the media heckled her father, a retired army officer as he tries to make his way inside the building.

This is inside my building compound , The man in this video is my father Indrajit chakraborty ( retd . army officer ) We have been trying to get out of our house to cooperate with ED , CBI and various investigation authorities to cooperate . There is a threat to my life and my family’s life . We have informed the local police station and even gone there , no help provided . We have informed the investigation authorities to help us get to them , no help arrived . How is this family going to live ? We are only asking for assistance , to cooperate with the various agencies that have asked us . I request @mumbaipolice to please provide protection so that we can cooperate with these investigation agencies . #safetyformyfamily In covid times , these basic law and order restrictions need to be provided . Thankyou

"How is the family going to live?", she queried while asking Mumbai Police to provide them with protection.

Rhea also published another video of her building's watchman on social media where he talked about being hit and harassed by the media. She later removed the tweet. But the now deleted read: "Ram is my building watchman, he is hurt, he was hit. Media people have entered my building compound and hurt the security guards and my father. Is this not a crime?"

Rhea tweeted a post about taking steps against media & asked # justicefor ram(her watchman) & in just 1hour she deleted it !! Why ? Got afraid of being trolled again?

Last month, police in Bihar registered a case against Rhea and several others on allegations of assiting suicide, and cheating on Sushant among others, on the basis of a complaint filed by the late actor's father K.K. Singh.

Rhea moved to the country’s apex court to demand the case be transferred from Bihar to Mumbai. However, the Supreme Court ordered a top probe agency investigation into the case.

Sushant was originally from Bihar but was living in Mumbai in the state of Maharashtra.

Simultaneously, India’s economic probe agency registered a money laundering case against Rhea and others based on suspicious transactions from Sushant’s account.

On Wednesday, India’s anti-Narcotics agency also registered a case on a potential drug angle in Sushant’s death based on the evidence found by the Enforcement Directorate during questioning.