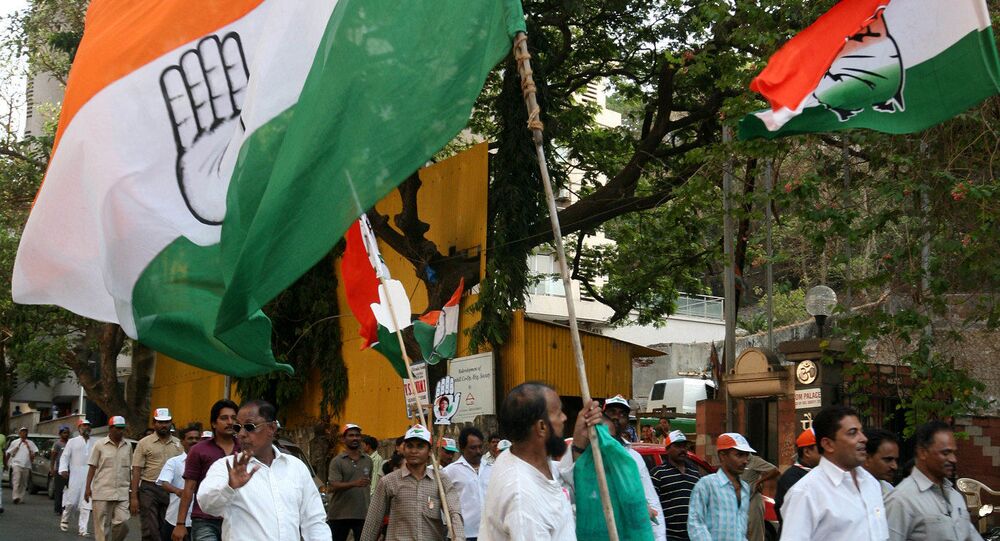 New Delhi (Sputnik): Twenty-three prominent members of India’s main opposition Congress, who wanted sweeping changes, were snubbed by the core decision-making body of the party on Monday. In a resolution, the party rallied behind Sonia Gandhi, Interim President of Congress and her son Rahul Gandhi.

A day after India’s Congress party warned 23 of its prominent members over demanding reforms and a change in the party leadership, a few of the dissenters claimed they had actually acted in the “best interest of the party”.

These key Congressmen conveyed their demands in a letter sent to party’s interim president Sonia Gandhi.

A former federal minister and a member of the upper house of India's parliament, Anand Sharma was one of the signatories of the letter of dissent.

He said the letter shared their concerns over the “present environment in the country”.

Well said. The letter was written with the best interest of the party in our hearts and conveying shared concerns over the present environment in the country and sustained assault on the foundational values of the constitution. https://t.co/SoH725j5Ve

​“India needs a strong opposition to confront the BJP. Suggestions for party's renewal made in sincerity is not dissent. Wish all colleagues had read it,” asserted Sharma in a series of tweets on Tuesday.

India needs a strong opposition to confront the BJP. Suggestions for party's renewal made in sincerity is not dissent. Wish all colleagues had read it.

​Another signatory of the letter, Congress’ General Secretary Mukul Wasnik said, “Sooner than later, those who saw the letter as an offence will also realise that the issues raised are worth consideration."

Well said. Sooner than later those who saw the letter as an offence will also realise that the issues raised are worth consideration.

​“History acknowledges the brave and not the timid,” said another signatory Vivek Tankha, another member of Rajya Sabha, the upper house of Indian Parliament.

Friends we are not dissenters but proponents of revival :: the letter was not a challenge to leadership but a parchment of action to strengthen the party :: universally truth is best defence whether it be Court or Public Affairs :: history acknowledges the brave & not the timid.

​On Sunday, Sonia Gandhi offered to resign from the leadership of the party and convened a meeting of the Congress Working Committee (CWC)  – the top decision-making body of the party -- on Monday to discuss the issue.

The majority of the members of the CWC rallied around Sonia Gandhi and her son Rahul Gandhi, while some demanded action against the signatories of the letter.

Instead of considering the issues raised, the CWC passed a resolution and requested Sonia Gandhi to continue “until such time as circumstances will permit an AICC (All India Congress Committee) session to be convened”.

The resolution however, warned the dissenters that “no one will be and can be permitted to undermine or weaken the party or its leadership at this juncture.”

It said “inner party issues cannot be deliberated through the media or public fora”.

Speaking on the developments in Congress, Sanjay Jha, a former spokesperson of the Party, told Sputnik that “There is a need for Congress party to completely re-invent itself.”

“As an organisation, it should become a lot more active and energetic, which has not happened because of the total high-command culture. There is a need for Congress party to completely re-invent itself. The party has to look beyond personality and look at the issues of leadership, ideology and organisation,” Jha said.

Jha was suspended last month for “anti-party activities and breach of discipline,” apparently for supporting the former Deputy Chief of Rajasthan Sachin Pilot, who had raised a bogey of revolt against the leadership.

Sonia Gandhi took over as Interim President of the party after Rahul Gandhi resigned from leadership following the debacle of Congress in the 2019 parliamentary elections for the lower house Lok Sabha.