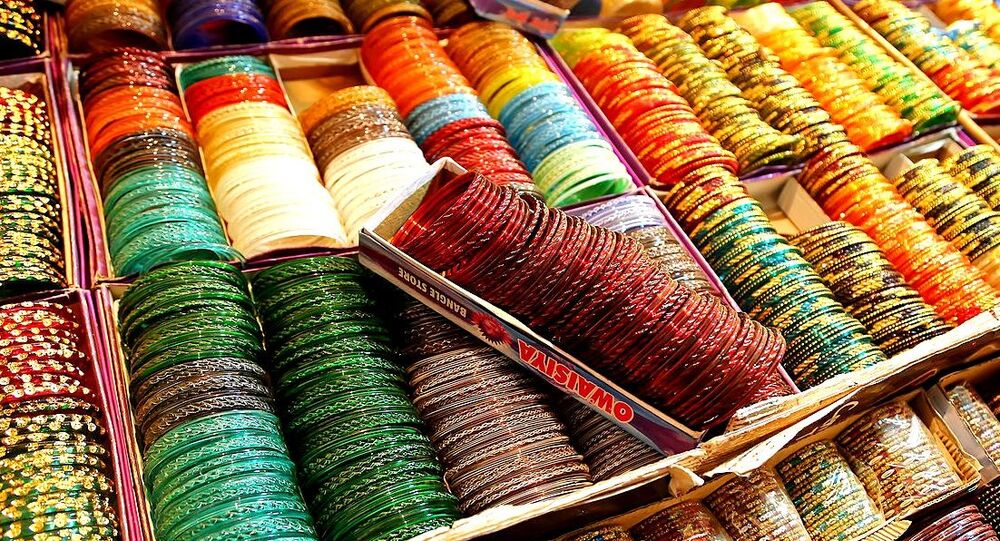 New Delhi (Sputnik): India’s desert state of Rajasthan is famous worldwide for its rich heritage and culture, going back hundreds of years, when Hindu Rajput kings ruled the region. The state is marked with several historic forts and palaces where the remaining line of India’s Rajasthani royalty still resides in grandeur, preserving their heritage.

In the heart of Rajasthan's Jodhpur, which is also referred to as the "Blue City" of India due to its blue hued buildings and architecture, lies a famous an ancient shop for traditional Indian bangles called "Bibaji Churiwale". The word "Churi" is Hindi for bangles – traditional Indian ornaments worn by women on their wrists. The ornaments come in gold, silver, platinum, and iron and are widely worn by women in the country.

Long after royalty ceased ruling over the Indian sultanate, white-bearded Abdul Satar Biba and his sons have carried on their ancestral legacy of creating crystal bangles into the 21st century.

"For years now, the name 'Biba Ji' has become our permanent identity. Wearing glass ornaments is a tradition of the Rajput royals. My grandmother called Bibi Ji started making bangles 150 years ago. In the old days, the royal families of Rajasthan used to follow the 'Parda System'. Women from the palaces were restricted from going outside the premises. Since my grandfather was blind, my grandmother, at that time, began carrying loads of jewellery, especially the bangles we made, to sell to the royal queens and princesses", Satar, the present custodian of Bibaji Churiwale told Sputnik.

​The cut-glass pastel bangles, studded with jewels in special orders from this shop are sold around the world. The specially crafted bangles from the Bibaji family are also still sent over to the royals residing in the palaces of Rajasthan, including the majestic Ajit Bhawan and Umaid Bhawan – where Bollywood actress Priyanka Chopra tied the knot with pop singer Nick Jonas in December 2018.

"After age caught up with my grandmother, my father named Mohammad Baksh who used to accompany her to the palaces as a child, took over the business. Men were never allowed to step foot in the chambers of the royal ladies but people there were familiar with my father who was nicknamed 'Biba Ji' since his name was hard to pronounce. My father continued making bangles for the queens and princesses for around 60-70 years. I started helping my father in the 1970s", said Satar.

The name Biba has remained with the family ever since. Presently, Satar's sons are also recognised by the same name.

The Bibaji family also bejewels their crystal bangles with precious stones and embroidery. The bangles are made by melting and molding glass with mud in hot furnaces. Once usable glass is extracted, it is exposed to more heat from the furnace after which they are converted into wire-line structures. The glass wires are then cut and joined in circular shapes of different diameters to fit different wrists. The process of cutting glass is a tedious one.

While experienced bangle makers can make normal glass bangles within three to five minutes, each of Bibaji's special crystal bangles takes the hardwork and craftsmanship of many artisans, specialising in cutting, shaping, and decorating the ornament.

She made a bangle under 1 minute! 👌🏽 #BangleMaking

Although the ancestral outlet of this shop is only in Jodhpur, its famous bangles are often displayed in jewellery exhibitions around India every year, Satar revealed.

This year, due to the coronavirus, the bangle-making business has reportedly suffered heavy losses up to $6.67 million in India.