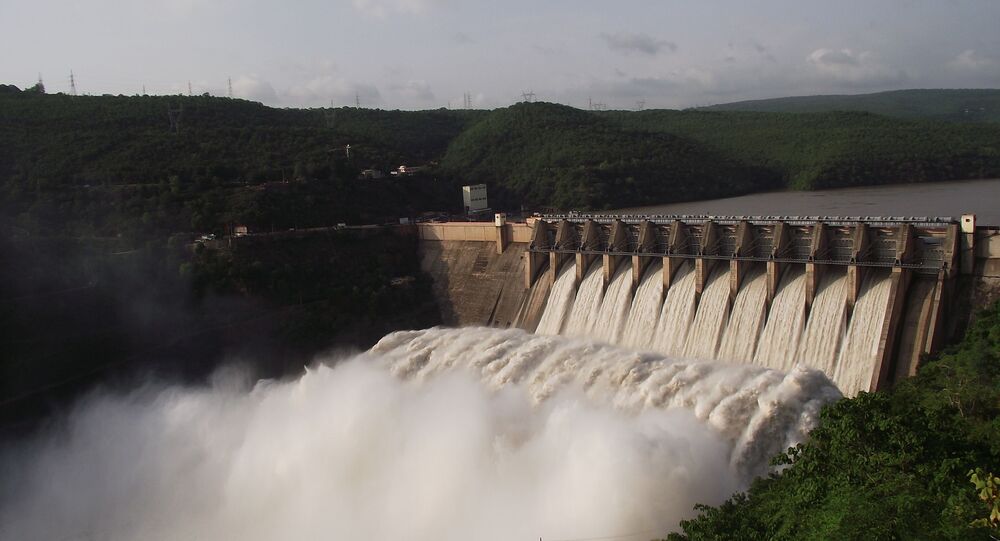 New Delhi (Sputnik): Initial reports suggested a short-circuit had caused the fire at the underground power station located at Telangana's Srisailam dam constructed across the Krishna River. Opened in 1981, the facility is the second largest working hydroelectric station in the country.

A rescue operation is underway in order to save nine people feared trapped inside an hydroelectric power station in India's Telangana several hours after a major fire broke out.

The incident occurred late Thursday night, when 19 people were doing their shift at the facility and a massive fire broke out at the Telangana State Power Generation Corporation Limited's hydroelectric station at Srisailam Dam.

While 10 people managed to escape death, nine others remain trapped inside. The injured survivors were rushed to a nearby hospital, media reports said.

Meanwhile, the National Disaster Response Force (NDRF) along with teams of local firemen are working on the rescue mission.

Telangana's Energy Minister Jagadish Reddy and Agriculture Minister Niranjan Reddy along with Prabhakar Rao, the chairman and managing director of Telangana Transco which is the operator of the hydroelectric plant, have been at the accident site since last night.

"Why it happened has to be investigated. How much damage has happened we will know only after the smoke goes away. Our priority right now is to rescue those trapped inside", media reports quoted Rao as saying. He said such an accident has never happened before at the plant.

Videos depicting the fire have gone viral on social media. Take a look.

major fire🔥broke out in the hydel power station on the left canal of #Srisailam #Telangana. Rescue operations are underway 10rescued,9people stuck on the lwr floor of the power house
Prayers for the team trapped. hope they r safe..@PawanKalyan @JanaSenaParty @Cbn_Kota pic.twitter.com/nvCeEtvhwP