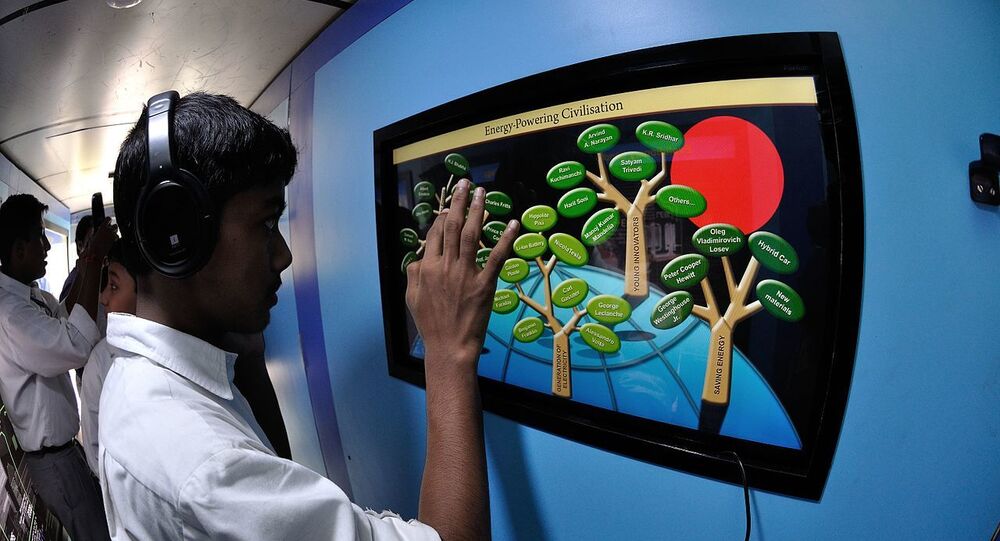 New Delhi (Sputnik): From social networking to internet browsing and shopping, India has an array of domestically-made apps to help users earlier accustomed to Chinese platforms before they were banned last month over an ongoing border standoff. Developers are exploring newer and trendier services to offer India’s 400 million smartphone users.

From providing "early warnings" about floods to "meme and keyboard" apps that allow people to create their own jokes, Indian software developers have won accolades from the Narendra Modi government against the backdrop of a "digital strike" against China by the authorities.

With the slogan "Go Vocal For Local", India has carried out a mammoth exercise under the Smart India Hackathon (SIH) 2020, a national digital product building competition, to make the nation self-reliant in terms of mobile applications.

Acing At What They Love

Memechat, a "meme and keyboard" app that lets people create their own jokes, is literally fueled by the love India's millennial generation has shown for memes – new age, relatable, and funny creative works that are made and shared for humour, news, and communication on social networking platforms.

"We were among the 6,940 entries competing for the top positions across eight categories including entertainment, education, health, e-learning, and games, among others", Kyle Fernandez, CEO of MemeChat and winner in the entertainment category of the Aatmanirbhar App Innovation Challenge told Sputnik.

Similarly, team Ctrl+Alt+Defeat developed a water level detector using an ultrasonic sensor to monitor rivers to provide real-time flood monitoring and early warning system to concerned authorities through a web and SMS application.
Abhishek Raghuvanshi, part of the winning team from the Gyan Ganga Institute of Technology and Sciences (GGITS) from Jabalpur, Madhya Pradesh said that the project's main concept was based on Geographic Information System (GIS) flood monitoring and assessment.

"We used a buzzer which alarms the authorities and residences whenever the water level starts rising so that they can start the evacuation process. We added the feature of prediction using satellite data", Raghuvanshi added.

An artificial intelligence (AI)-powered app CaptionPlus emerged as the winner in the app innovation challenge for generating good captions for social media stories. The app acts as a search engine for captions and hashtags for social butterflies while eliminating the hassle of thinking and writing one themselves.

"You only need to upload your picture in the app and the app suggests the most contextual captions and hashtags that would go with your photo", Rahul Maurya, Co-Founder, CaptionPlus told Sputnik.

At present, this winning app has more than two million downloads from around the world, with more than 28,000 captions used every day.

The Indian government has also awarded a team from the National Institute of Technology, Warangal who worked on a digital solution to combat bribery.

Beyond the First Step: A long Wishlist

Software developers have urged the government not only to encourage them through holding such competitions, but training and funding are also needed to compete with China on the global stage.

"Apart from challenges and contests, the government should do more seed funding for startups that they find suitable. It can be in many forms, be it bank supported, venture capital, or with angels. The government should also focus on more supportive tech incubators at the college level. A lot of ideas die with students passing from college", Rahul Maurya urged.

"An average of 1.5 million students earn their engineering degrees in India every year, but due to the lack of skill required to perform technical jobs, less than 20 percent get employment in their core domain", said Taaran Chanana, Managing director, MemeChat, adding that with the right mentorship and guidance, "India definitely has the capability to be self-reliant".

"We expect our mentors and teachers to expose us to newer technologies. We hope that the government could provide us with a team to support us with some new ideas so that our project could become more efficient", Ekansh Verma, third year engineering student from GGITS, also part of the Hackathon-winning Ctrl+Alt+Defeat team added.

Talking about whether India has a market for such domestically-made apps, especially with global players like Instagram bouncing in to grab their shares, tech analysts told Sputnik that due to the huge mistrust regarding data security from nations such as China, people in India have finally started to take a closer look at apps made in the country.

While India is trying to limit China's otherwise dominant position in the tech sphere with steps such as restricting companies like Huawei and ZTE from participating in its 5G trials and banning apps, Indian tech experts have urged creators to take full advantage of the growing nationalistic spirit.