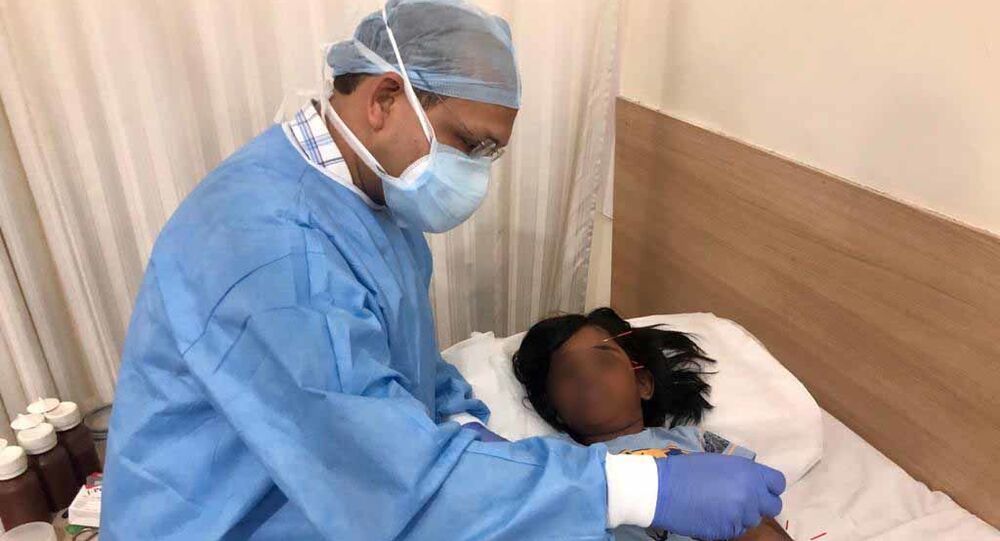 What Heals You, Won't Hurt You: Acupuncturist in India Needled by Growing Resentment Towards China

New Delhi (Sputnik): The worst border skirmish between India and China in the last 50 years has cast a dark cloud over the economic, diplomatic, and cultural ties of the two countries, with traders, businessmen, and consumers bearing the brunt of strained relations. Indian acupuncturists underscore politics should not be intermingled with medicine.

"For me, it's nothing less than magic", exulted Jahnvi Tyagi, 53, who has seen a "huge change" from multiple migraine attacks per weeks to just one or two minor ones in 15 days after receiving several sessions of acupuncture in the Green Park area of New Delhi.

Tyagi is one among 40-50 patients who receive acupuncture treatment — a 3,000-year-old healing practice believed to have originated in China — at a clinic in Delhi's posh Green Park area.

It makes no difference to Tyagi and others whether the treatment they are receiving is of Chinese origin at a time when anti-China sentiments are believed to be dictating Indian government policies.

Nevertheless, tensions following the violent border standoff in the Ladakh region on 15 June have caused fears among practioners that they'll lose their livelihoods.

Dr Manish Gupta, who received advanced Chinese medical training in Nanjing, tells Sputnik that he hasn't faced any issues from his patients, but the steps being taken by the Indian government have made him conscious or even fearful.

"Will I be anti-India for having a degree from China? Yes, the question has come to my mind that I might be labelled so", he said referring to the widespread anti-China sentiment in the country.

As per the "WHO Traditional Medicine Strategy 2014-2023", 103 countries have recognised acupuncture as an independent system of medicine. The Acupuncture Science Association claims it is the fastest growing treatment system in the world after allopathy.

The trust in the ancient treatment popularly known as "Chen Chiu" in China and "Bhedan Karma" in India can be gauged from the experience of Jahnvi Tyagi who has had to live with debilitating migraines for 37 years.

"I was devastated when doctors told me brain surgery was inevitable. In a last attempt to find a cure for this everlasting problem, I booked the first appointment with an acupuncturist in Delhi. After that, everything became history", Tyagi added.

It is claimed that acupuncture can cure as many as 338 diseases, including gynaecological problems, paralytic dysfunctions, and arthritis pain. Presently, India has over 1,000 acupuncturists handling such conditions.

"I have so far not faced any problem in practising acupuncture. But looking at the pace at which the anti-China sentiment is raging across the country, I am somewhat concerned that this therapy might be banned if the border standoff continues and bilateral relatios take a turn for the worse", Dr Manish Gupta told Sputnik.

While acupuncture is still not regulated in India, the External Affairs Ministry has warned foreign cultural centres to strictly adhere to 2009 guidelines amid concerns around "growing Chinese influence in higher education and culture".

One such fallout of the 15 June face-off between Indian and Chinese troops at the border was seen in the form of Mandarin language being skirted by the Narendra Modi government in the New Education Policy that seeks to promote language-learning at the secondary school level. The government has also put several higher education institutes that offer Chinese language training under the scanner.

Renowned Indian acupuncturist Dr Inderjit Singh Dhingra, who signed a memorandum of cooperation with a Chinese university to promote education and research in acupuncture in India, tells Sputnik, "acupuncture is reducing the burden from government hospitals and its efficacy is proven. Politics should not be intermingled with the healing practice that has been crucial in curing 330 diseases and physical ailments".

This year marks the 110th birthday of Dwarkanath S Kotnis, who is revered in China and mentioned in the list of 300 martyrs of China and heroic groups who sacrificed their lives during the Japanese invasion of China in the 1930s.

Chinese leaders visiting India make it a point to meet the family of the Indian doctor, who died serving wounded Chinese soldiers in the conflict. In 1938, Dr Kotnis was sent to China as part of an Indian medical mission to serve frontline workers.

© REUTERS / Kim Kyung-Hoon
People's Bank of China Picks Up Shares in India's ICICI Bank Amid Soured Relations
The Acupuncture Association of India was started in West Bengal by Dr Bejoy Kumar Basu, a colleague of Dr Kotnis in China to continue the friendship between the countries by promoting acupuncture.

The acupuncturists point out that the therapy finds its origin and roots in India as well with its mention in Ayurveda. China, Japan, and India continue to lay claim to the origin of therapy which has evolved and been propagated by China over the years.

Dr Manish Gupta says acupuncture is deeply rooted in the Indian Vedas, the Hindu scriptures much older than 3,000 years, and he strongly believes that during the era of the Silk Road, Persians, Indians and Chinese shared information.

"Its roots are connected between India, China, and Persia. And I think what heals you, should not be of worry to anyone", said Dr Gupta.