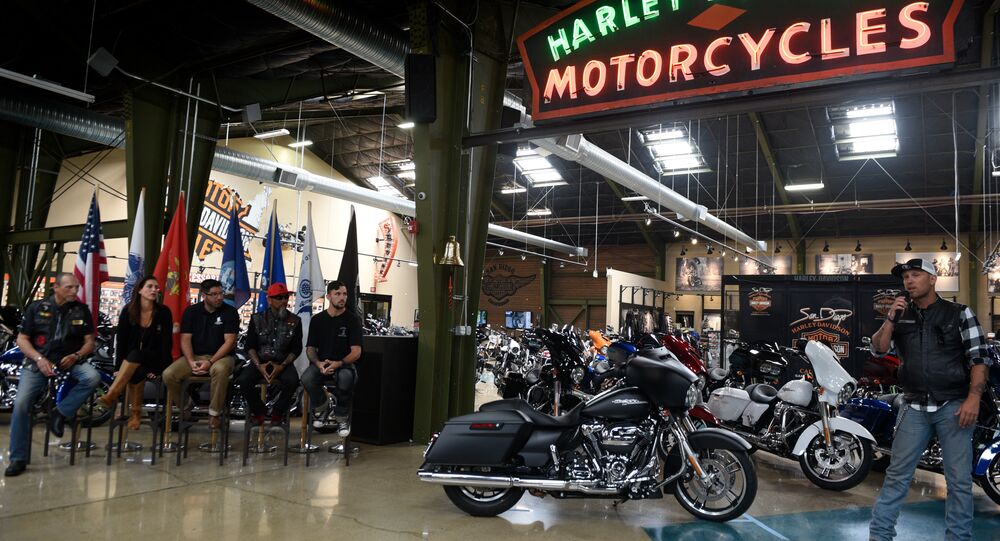 New Delhi (Sputnik): As the talks over a trade deal continue between India and the US, American President Donald Trump was informed about a reduction in tariffs on Harley Davidson motorcycles by Prime Minister Modi himself. Trump has repeatedly lashed out at India for its high custom duties on the bikes.

Even the lower tariffs couldn't help the American motorcycle maker Harley Davidson sustain itself the Indian market as it is looking to wind down its assembly operations in the country "as a result of weak sales and a lack of visibility for future demand".

A person in the company, as quoted by the Indian news daily The Hindu, revealed that Harley Davidson has sent out feelers to a few automakers through consultants for a possible outsourcing arrangement using its leased assembly facility at Bawal in Haryana.

The American brand only makes up a fraction of India’s two-wheeler market but had several mentions during the trade deal talks with US President Donald Trump, who labelled India "Tariff King". Earlier this year, around his maiden visit to India, Trump said Harley Davidson has to pay tremendous tariffs when they send motorcycles to India.

"When Harley Davidson sends a motorcycle to India, as an example, they have to pay 100 percent tax. […] Now, the Prime Minister Modi, who I think is a fantastic man, called me the other day and he said we are lowering it to 50 percent. I said okay, but so far, we're getting nothing. So we get nothing, he gets 50 [percent], and they think like they're doing us a favour. That's not a favour", POTUS said.

To impress the US president, India had even revealed reports that it may further slash the import duty.

Harley Davidson’s share in the US market is also shrinking as it sales declined by 32% last year, but the brand enjoys popularity among Trump’s electoral base. The company, which employs about 5,000 people in the US, has taken the call for exiting as part of its new "rewiring" strategy to focus on about 50 markets. The company is aiming to focus mainly on North America, Europe, and parts of the Asia Pacific that represent the "majority of [its] volume and growth potential".

"The company is evaluating plans to exit international markets, where volumes and profitability do not support continued investment in line with the future strategy", Harley Davidson said last month.