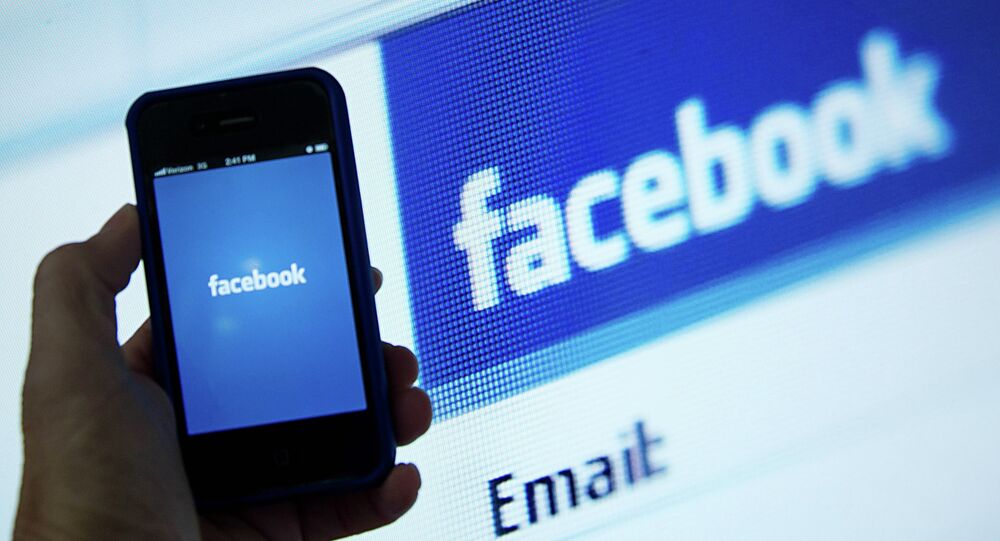 New Delhi (Sputnik): Social networking giant Facebook has been called out repeatedly by political parties around the world, for allegedly favoring particular candidates and influencing elections. It has also been accused of monitoring content very loosely on its platform, leading to several cases of crime in India, including lynching.

A senior journalist Aawesh Tiwari from the central Indian state of Chhattisgarh has registered a first information report (FIR) against Ankhi Das, the public policy director of Facebook India in Raipur under various sections of the Indian Penal Code (IPC).

The charges levied by Tiwari against Facebook include deliberate, malicious acts to insult and outrage religions and religious beliefs, intent to incite communal offences against other communities and criminal intimidation as well as defamation.

Tiwari’s complaint comes as a response to another complaint registered by Das in the Delhi Police Cyber Cell that accused several people including the Raipur-based journalist of “threatening” and “abusing” her after The Wall Street Journal alleged that Mark Zuckerberg’s social networking giant is biased towards India’s ruling Bharatiya Janata Party (BJP) when it comes to censoring hate speech.

“I wrote a post enlisting eight points describing how I feel Facebook is promoting communal disharmony and hate speech via its platform. Later, I found out that a complaint has been filed by Das in the Delhi Police Cyber Cell saying that she is being threatened. I, being a journalist, decided to take legal action because a complaint against a journalist posting something on Facebook is a clear attack on our voice and right to freedom of speech,” Tiwari told Sputnik.

The Wall Street Journal (WSJ) recently reported that Facebook India and its policy director Das have not being monitoring posts allegedly promoting hate speech by BJP members, supposedly not willing to spoil its “commercial-interests”-based relations with India’s ruling party. Facebook has denied any bias.

Facebook Hate-Speech rules being tweaked to suit the ruling party in India. On page 1 of @WSJ . pic.twitter.com/4SwD9g0F1l

​“I have complained that Facebook, and Das, with their inclination towards India's ruling BJP are not taking necessary measures to prevent communal disharmony spreading in India via their platforms. Many of my own posts that I personally have directed towards the government, questioning it on the status of secularity in India, have been red flagged. My account has been blocked at times, which as Facebook’s response to ‘free speech has been disappointingly shocking. I am getting hate for my post on Facebook now,” Tiwari added.

Facebook has over 200 million users in India. In recent years, cases of violence and lynching on the ground of religious differences have been seen in India, most of which were instigated by fake news and hate speech shared on Facebook and its instant messaging app WhstsApp.

Just last week, India’s “Silicon Valley” Bengaluru in the southern state of Karnataka, witnessed the death of four people in a violent clash that erupted after a “derogatory” post against the Prophet Muhammad.

Following dozens of mob lynching cases, especially against Muslims, India’s present IT Minister Ravi Shankar Prasad in 2018 called out Facebook and WhatsApp for “being abused as a vehicle for the  weaponization of information”.

© CC0
WhatsApp Execs Meet With Indian Officials Following 30 Fake News Lynchings
In recent days, after the explosive report by the WSJ, Shashi Tharoor the Chairman of Parliamentary Panel on Information Technology has indicated that Facebook must clarify its position on going soft on BJP members’ objectionable posts, for fear of damaging its business prospects in India.

Countering Tharoor’s plans, BJP parliamentarian Nishikant Dubey said that the Congressman has no powers to summon anyone. Both of India's main political parties are now locking horns in their support and objection to Facebook's content monitoring practices.

The Congress party has written to Facebook CEO Mark Zuckerberg calling for a high level probe into Facebook India's team.

We cannot allow any manipulation of our hard-earned democracy through bias, fake news & hate speech.

As exposed by @WSJ, Facebook’s involvement in peddling fake and hate news needs to be questioned by all Indians. pic.twitter.com/AvBR6P0wAK

​Meanwhle, Das has tweeted how "easy" it is "to blame others", pointing out the hate messages she is being subjected to after the article by WSJ surfaced on social media.

It's always easy to blame others.

You can spend your entire life blaming the world, but your success and failures are your own responsibility.