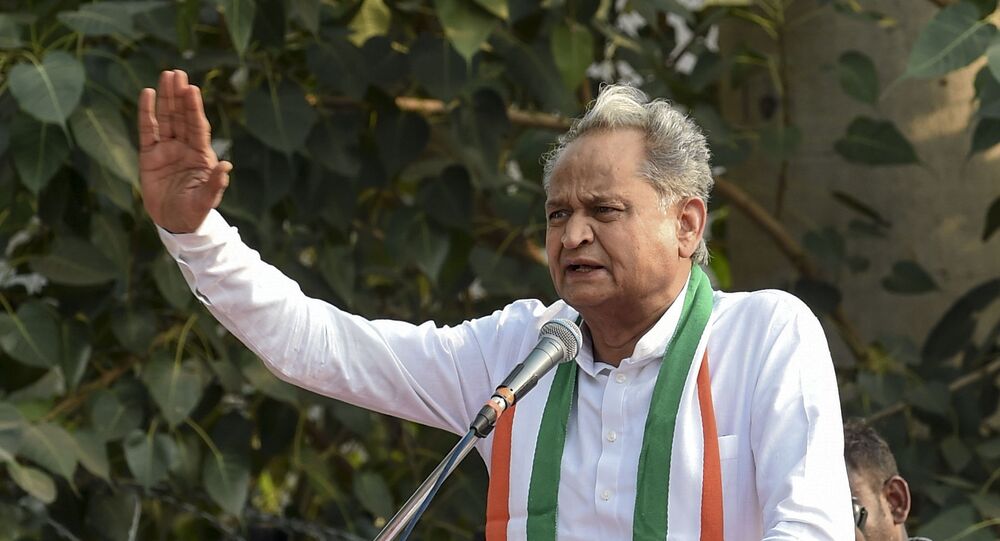 New Delhi (Sputnik): The crisis in the government led by India's main opposition party Congress in Rajasthan ended after national leaders promised to address the concerns of rebel legislators. Nineteen rebels led by Sachin Pilot accepted a truce with State Chief Ashok Gehlot and returned to the party fold on Monday (10 August).

Chief of India's Rajasthan Ashok Gehlot has won a confidence vote in the state legislature, ending weeks of political turmoil after a patch up with rebel legislators headed by Sachin Pilot, former Deputy Chief, who also headed the Congress Party’s state unit. Pilot was suspended from both posts last month, after he revolted against Gehlot.

Gehlot had accused the federal ruling Bharatiya Janata Party (BJP) of trying to topple his government. The BJP rebuffed the charges and said the "people of Rajasthan bore the brunt of factionalism within the party (Congress)".

"The vote of confidence which was brought by the government has been passed with a very good majority today in the Rajasthan assembly. Despite various attempts by the opposition, the result is in favour of the government", said Sachin Pilot after the voting.

Congress has a strength of 107 legislators and the support of independents and allies, while the opposition BJP has 72 members in a house of 200. Six members of the Bahujan Samaj Party (BSP) headed by former Uttar Pradesh chief Mayawati had earlier merged with Congress.

The trust vote means the Congress ministry can return to the business of governing the state.

Sachin Pilot, who was considered to have piloted the Congress Party to victory in the state legislature elections in 2018, wanted to become the chief of the state. But the central leadership chose a veteran leader, Ashok Gehlot in the faction-ridden state unit, while Pilot was made his deputy.

"A roadmap has been prepared for all the issues that were being raised. I have complete faith that the roadmap will be announced timely", said Pilot, referring to the rapprochement with Gehlot, brokered by the Congress Party's national leadership.

Gehlot has been given six months to repair his ties with the disgruntled party legislators.

Meanwhile, two petitions against the merger of six BSP legislators with Congress were filed in the Rajasthan High Court – one by the BSP and another by a BJP legislator. The chairman of the state legislature CP Joshi, who had accepted the merger, contended that only he had the power to decide on disqualification and judicial review could only be done if he had rejected the deal.