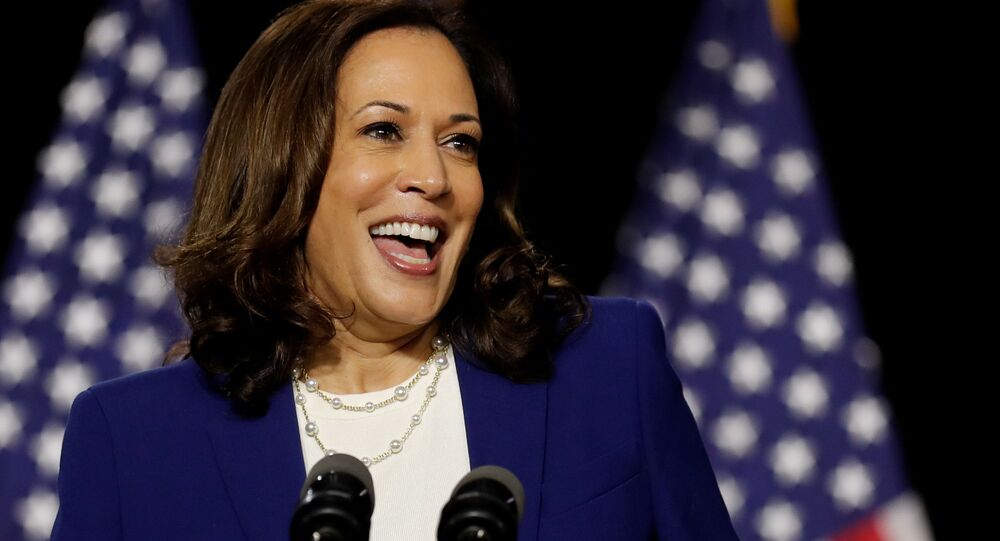 New Delhi (Sputnik): Indians seem to be upbeat about US presidential hopeful Joe Biden's decision to nominate Indian-origin Senator Kamala Harris as his running mate. Her mother, whom she calls the "greatest hero of her life", hailed her nomination from India.

Joe Biden's running mate Kamala Harris has set off an avanlanche of reactions on Twitter since an old video, showing her making an Indian dish, dosa, along with American actress of Indian origin Mindy Kaling, began making the rounds on social media.

In this viral video from 2019, Indian-American Kamala Devi Harris, who is in the race to become America's first black female veep, helps Mindy Kaling, Indian-American comedian, in the preparation of Masaala Dosa pic.twitter.com/8k0tSOrW9j

​Masala Dosa is an integral and staple meal in South India - a crepe with a filling of spicy potatoes. Indian-origin Senator Kamala Harris has close links with the southern Indian city of Chennai, where her mother Shyamala Gopalan was born. Her father was from Jamaica.

While a few Twitter users claimed that seeing her attempt to make a dosa reinforces their belief in Harris' Indian origin, others said they don't really care.

mom and dad talking about the video of mindy kaling and kamala making dosa pic.twitter.com/hMk8X64r4V

Kamala is faking the right level of playing to antipodal galleries at different times. South Asian Anti CAA for the Ummah vote followed by Indian Dosas for campaign $. Nirmala has a tough task cut out. She can't get by with Dosa videos. So Harris is Tamil & Sitaraman is not https://t.co/SkysyxTexw

Kamala Harris & Mindy Kaling Cook Masala Dosa
Please don't show this to the president, he will make up another story!

​A Twitter user opined that the news was too trivial to be covered by the national media and said, "So, Kamala Harris has never made a dosa. I thought you should know this earth-shaking, life-altering fact, which is on National news here".

What excites people in India is that Senator Harris is the first person of Indian descent and the first Black woman to bag such an opportunity in the US presidential elections.

Similarly, another video of Harris eating pork chops has also surfaced on Twitter.

Finally got my pork chop! pic.twitter.com/3LUSKorixU

​While a section of Twitterati said it would be a difficult part for upper caste Brahmins (majorly vegetarian) in India to accept, others asked netizens to "let her be". Some even claimed it might affect votes from the upper caste Indian-Americans in living in the US.

There goes the Brahmin, the Jain and the Muslim vote .... https://t.co/GeLC5N9MhF

Kamala Devi Harris is contesting election in America. And some Indians in India are angry - why is she eating pork chop?

You have to learn to smile at these absurdities 🙂. Let her be https://t.co/6rcclzOiMd

​Meanwhile, the presidential elections in the US are set for November 2020. While President Donald Trump is hoping for a second term in the White House as Republican candidate, he is challenged by Joe Biden, a Democrat, who used served as US vice president from 2009 to 2017.