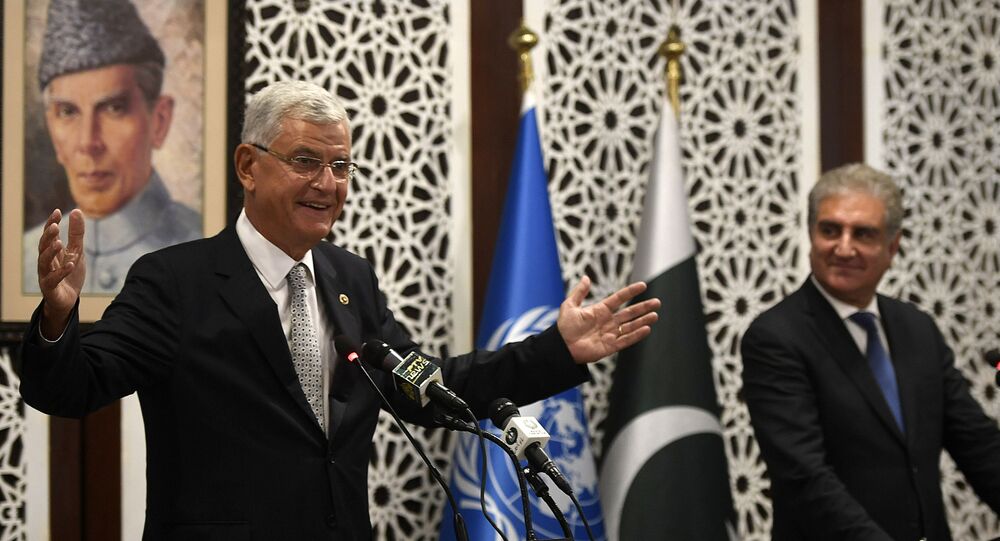 New Delhi (Sputnik): On the first anniversary of the abrogation of Article 370 last week, Pakistan again raised the matter of Jammu and Kashmir in the United Nations Security Council with help from China, the third time since 5 August 2019. However, like every time, the matter was deemed bilateral by the members.

“If my assistance would be required by the parties as a president of the UN General Assembly, I would be ready to provide contribution within my mandate,” he said while reiterating that the position of the United Nations on this region is governed by its charter and applicable Security Council resolutions.

The 1972 Simla agreement between India and Pakistan states that the final status of Jammu and Kashmir is to be settled by peaceful means in accordance with the charter of United Nations, Bozkir stated after discussing the matter with Pakistani Foreign Minister Shah Mahmood Qureshi in Islamabad on Monday.

He said that visit brings a better understanding of Pakistan’s approach to the issue, which will be beneficial if the matter reaches United Nations.

Last week, Pakistan and China raised the Jammu and Kashmir matter for the third time at the United Nations Security Council since August 2019, when India stripped the state of its temporary special status.

Except for China, the other UNSC members sided with India and termed the matter bilateral, and not deserving of the council member’s time.

Bozkir, who is the first Turkish president of the UNGA, also reiterated how Turkey’s position regarding the issue of Jammu and Kashmir is well known and expressed at every level by the Turkish government.

Turkey's foreign ministry had said in a statement that removal of the special status of Jammu and Kashmir had not contributed to peace and stability in the region.

Terming the comments “incorrect, biased and unwarranted”, India’s External Affairs Ministry has called out Turkey for its remarks on Jammu and Kashmir and asked it to refrain from making them.

However, Turkey, China and Malaysia support Pakistan in its quest for Kashmir.

India and Pakistan have been fighting over Kashmir since 1947 but relations have completely deteriorated after India’s decision to revoke the state's special status. Last week, Pakistan also released a map showing the whole Jammu and Kashmir region as part of its territory while it advocated an independent status for the region.