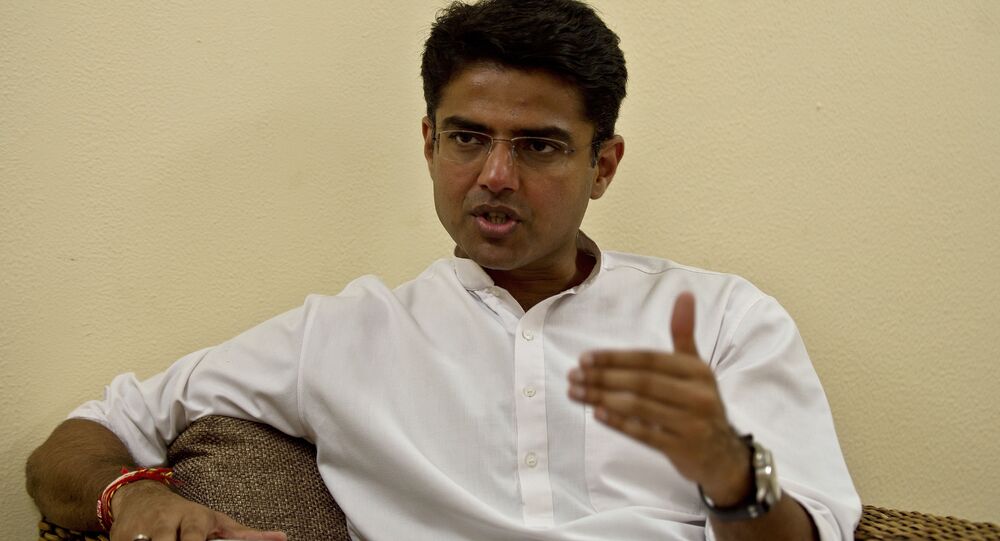 New Delhi (Sputnik): The Ministry, headed by India’s main opposition Congress party in Rajasthan state, faced crisis when its Deputy Chief Sachin Pilot along with 18 legislators raised a banner of revolt against State Chief Ashok Gehlot. When Pilot failed to heed to the requests of the national leadership of Congress, he was removed from the post.

Former deputy chief minister of India’s Rajasthan State, Sachin Pilot, who was removed from the post for attempting to revolt in early July, met former Congress party Chief Rahul Gandhi and General Secretary Priyanka Gandhi Vadra in New Delhi on Monday, in what appears to be a move to resolve the crisis in the party government in Rajasthan.

There was no confirmation of the meeting either by Congress Party or from Sachin Pilot. The reported meeting comes ahead of a session of the state legislature on 14 August, when Ashok Gehlot is expected to seek a confidence vote in the legislature.

Sachin Pilot, who held the dual posts of Deputy Chief Minister in the government and President of the Rajasthan unit of Congress party had rebelled against Ashok Gehlot, forcing the Congress national leadership to remove him from both positions. Two ministers of Rajasthan who supported Pilot were also dropped from the ministry headed by Gehlot.

Pilot, along with 18 legislators had demanded a change in leadership of the ministry.

The state's Chief Minister, meanwhile, has taken his supporting legislators to a hotel in the fort city of Jaisalmer, fearing poaching by the nation's ruling Bharatiya Janata Party (BJP). Gehlot had accused BJP of engineering trouble in his ministry, and tempting legislators to switch sides.

BJP has also shifted its legislators to a resort in neighbouring Gujarat state, amidst reports that some of them were unhappy with the party leadership.

“We had an input that the Congress was approaching our legislators through administrative officers and other influential people. So we decided that they should all be at one place where they can be protected,” said the state's BJP Chief Satish Poonia.

Meanwhile, six legislators belonging to regional Bahujan Samaj Party – a political outfit of the lower castes, have urged the Supreme Court of India to transfer a petition for their disqualification for violating party directives, pending in the High Court of Rajasthan. These six legislators had merged with Congress party en masse.

The legislators contented that although they'd won the elections held in December 2018 as nominees of the Bahujan Samaj Party, the entire legislative party merged with Congress in a move that was recognised by the chairman of the legislator.  Therefore, they could not be disqualified under the anti defection law.

According to the anti-defection law in India, a legislator is deemed to have defected if he either voluntarily gives up the membership of his party or disobeys the directives of the party leadership on a vote. This implies that a legislator defying (abstaining or voting against) the party whip on any issue can lose his membership of the House.  The law applies to both Parliament and the state legislatures.

An exception to the law is when a party merges with or into another party, provided that at least two-thirds of its legislators are in favour of the merger.