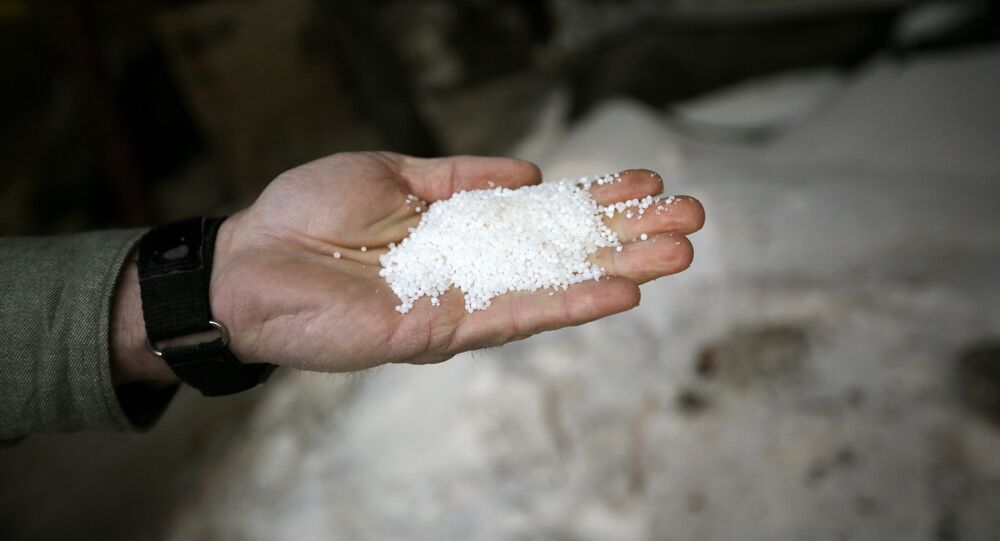 New Delhi (Sputnik): Lebanon's capital Beirut was shaken by a deadly blast on 4 August which is believed to have occurred due to 2,750 tonnes of ammonium nitrate being stored in a warehouse at the city's port. The detonation killed at least 157 people and left 5,000 injured.

A consignment of 697 tonnes of ammonium nitrate being stored in a warehouse in Chennai, India is being shipped to Hyderabad. It is being disposed of after the e-auction of the ammonium nitrate to a Hyderabad-based company. The storing of the explosive chemical arose new fears following the 4 August explosion in Beirut.

The chemical consignment, imported from South Korea, was seized in 2015 from a Tamil Nadu-based importer which lacked the proper license.

© AFP 2021
Deadly Beirut Blast Carved Out 43-Metre Crater, Packed the Punch of a 3.3 Earthquake
The importer had been licensed to import fertiliser-grade ammonium nitrate, whereas the chemical supplied was found to be explosive grade.

According to reports, 10 containers loaded with 181 tonnes of ammonium nitrate have already been sent to the Hyderabad-based buyer.

The transport of the highly explosive content is being done in accordance with the 12-point safety rules established by the Chennai police and Petroleum and Explosives Safety Organisation (PESO) officials.

On 4 August, a devastating explosion took place at the port of Beirut, killing at least 158 people and injuring over 5,000. Authorities suggested that the explosion was caused by the detonation of 2,750 tonnes of ammonium nitrate, stored in the port for six years without due safety measures. The explosion has devastated the city, completely destroying or severely damaging dozens of buildings.