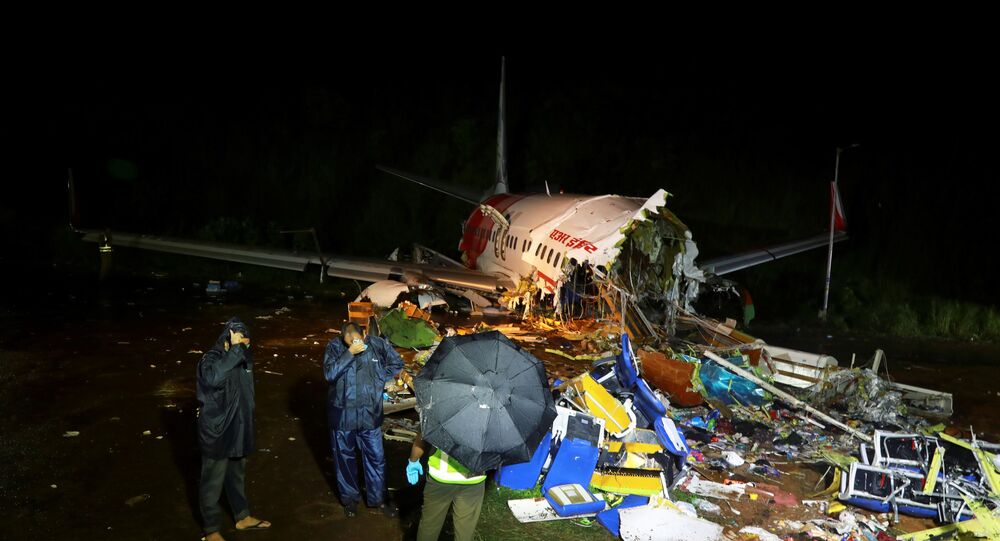 New Delhi (Sputnik): The Air India Express Boeing 737 made two attempts to land on the runway amid extreme weather conditions, according to flight-tracking website FlightRadar24. The pilot aborted the first approach at descent and circled the path again to make a safe landing. However, the plane skid-off and overshot the tabletop runway.

The Black Box from the Air India flight from Dubai to Kozhikode has been recovered by the authorities from the rubble of the ill-fated passenger jet, which crashed on the night of 7 August.

The black box, which stores crucial flight data, recordings from the cockpit, files and information on plan’s altitude, will play a significant role in the investigation of the crash.

The latest images of the crash, which happened late at night, show the cockpit lying meters away from the body of the plane.

- Plane landed around 3000-feet from the normal touch
-down point. Runway is 8800-feet pic.twitter.com/SsimJRypnV

Another video shows the rubble of the plane lying 35-50 feet down from the tabletop runway.

18 people, including two pilots, have lost their lives in the incident. pic.twitter.com/r1YRiIkbrM

Latest visuals from the #KozhikodeInternationalAirport.

The Air India Express Boeing 737 made two attempts to land on the runway amid extreme weather conditions but overshot the runway in the second attempt.#AirIndiaCrash pic.twitter.com/vBPjxByLzR

The Directorate General of Civil Aviation (DG), Civil Aviation Ministry senior officials, the Airports Authority of India, and Air Navigation Service members will hold a meeting today in Delhi to discuss the crash landing of the Air India Express flight.

According to weather radar, the approach was for runway 28, but as the pilots faced difficulties, they went around twice and came from the opposite side on runway 10 and the plane crash-landed," DGCA had said.

Twenty people, including both the pilots, died in the air crash while 22 remain at the hospital in critical condition.