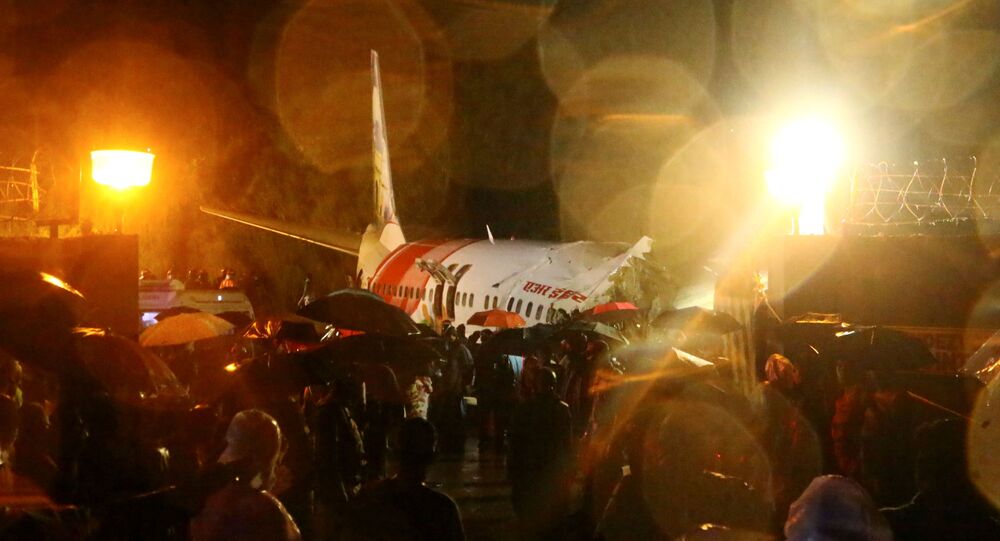 New Delhi (Sputnik): The fatal crash landing of an Air India jet in India's southern state of Kerala took the lives of 20 people, including the two pilots, on Friday (7 August) evening. The Air India Express Boeing 737 flew in from Dubai with 184 passengers, five cabin crew and two pilots.

After a fatal air crash at Mangalore airport in Karnataka State in 2010, a member of India's Civil Aviation Safety Advisory Council (CASAC) had red-flagged the safety of Karipur airport in Kerala (also called Calicut airport). Karipur, like Mangalore, is a table-top airport, where there was no room for error while landing.

Captain Ranganathan, a member of CASAC – had warned that the “Calicut (Karipur) runway does not have a minimum RESA (Runway End Safety Areas) on one end and NO RESA on the other.”

“The Air India Express accident in Mangalore should have alerted the AAI (Airport Authority of India) to make the runway conditions safe,” said Captain Ranganathan. The pilot had warned of a dangerous situation in Karipur, “especially in wet conditions”.

Again, exactly a year ago, the national aviation regulator, the Director General of Civil Aviation (DGCA), had issued a warning to Calicut (Karipur) International Airport after an audit. The show cause notice said, “Excessive rubber deposits are observed....” on the runways, which could reduce friction, leading to the unsafe landing of aircraft, especially during heavy rain.

“...it is inferred that critical parts of aerodrome required to conduct safe aircraft operations at Calicut (Karipur) International Airport, Calicut are not maintained according to requirements set out in CAR (Civil Aviation Requirement...,” read the notice by DGCA.

According to meteorological warnings for the region on Friday, the weather condition was extreme. The national weather forecasting agency – the India Meteorological Department, had sounded a red alert in Kozhikode (Calicut) and Malapuram districts on Friday as they were inundated with over 20 cm rain.

​Meanwhile, an investigation team from DGCA, the Aircraft Accident Investigation Bureau and top Air India officials are expected to arrive in Kozhikode (Calicut) on Saturday.

18 people, including two pilots, have lost their lives in the incident. pic.twitter.com/r1YRiIkbrM

​Almost 10 years ago, an Air India Express from Dubai to Mangalore crashed while landing. The Boeing 737-800 aircraft, carrying166 passengers on board, overshot the table-top runway and crashed into the valley, before bursting into flames. The crash left only eight survivors.