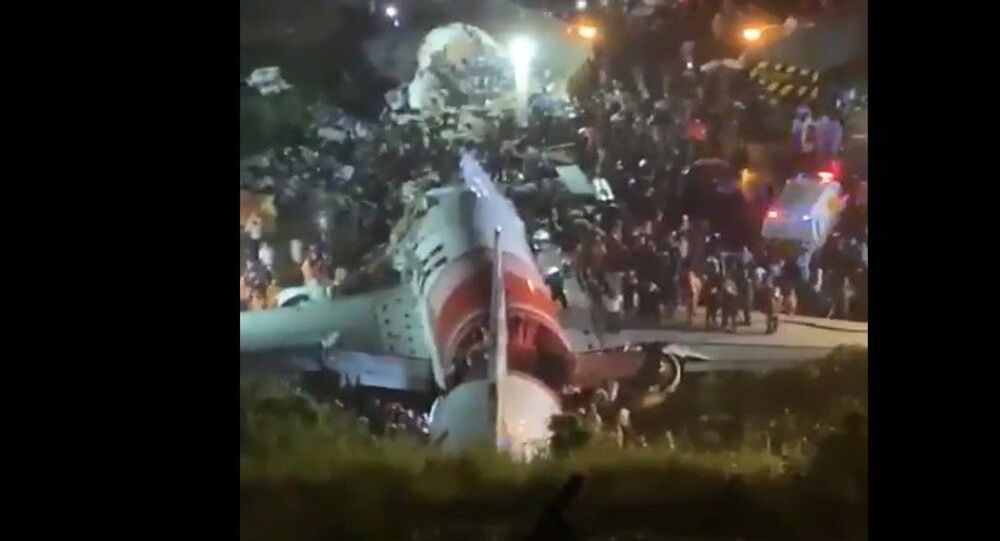 New Delhi (Sputnik): An Air India Express Dubai-Calicut flight (Boeing 737) flight, which was carrying 191 people on board, skid off the runway while attempting to land at Kerala's Kozhikode International Airport, killing at least 14 people, including the pilot.

Though the reason for the Air India Express accident still haven't been officially confirmed, the two main factors being considered are pilot error and the weather conditions.

Harsh Vardhan, an aviation expert told Sputnik that the pilot should not have attempted to land, given the poor weather, but it's still unclear whether the crash was caused by a mechanical failure or pilot error.

"It was a very risky landing, so you can't take chances. The weather condition is only a contributing factor and we have to see that whether it is an impact of something done by the pilot or any component has not performed according to the specified parameters," the expert said.

Kerala has been on red alert for extremely heavy rainfall, including in the Kozhikode district. The airport where the pilot attempted the landing is also said to be tricky for planes. However Harsh Vardhan refused to blame the runway noting that the pilot would have been trained to perform in those conditions.

"It's not about tricky airport or weather conditions as such, but what judgment you make at that point. How the aircraft was broken into two pieces clearly indicates that there was an accelerated movement and pilot couldn't control the speed of the plane," he said.

The Air India Express flight was a repatriation flight that was carrying stranded passengers from abroad. According to the Indian aviation regulator, the flight made several attempts to land but skidded off the runway and fell into a gorge before breaking into two.