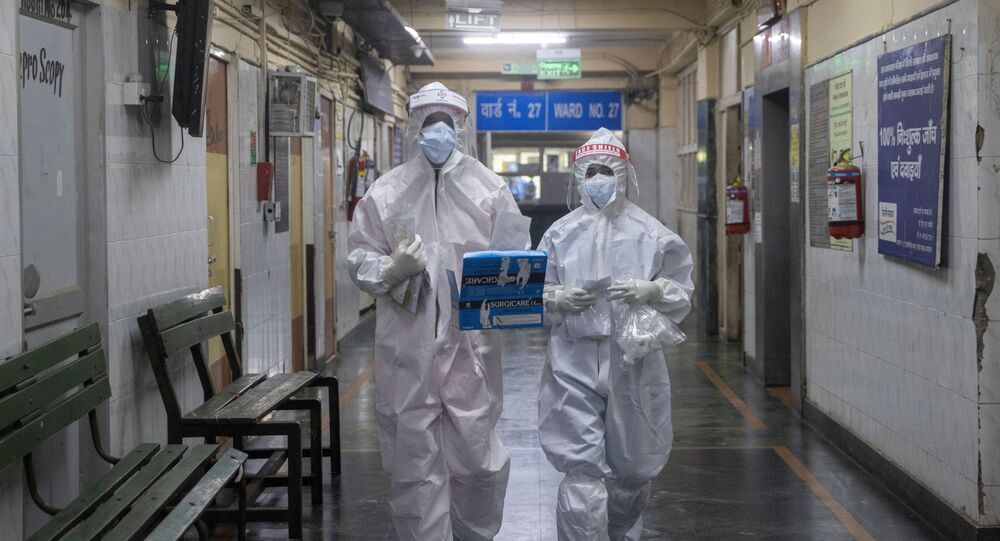 New Delhi (Sputnik): India went into a complete lockdown on 25 March to combat COVID-19. Since the pandemic hit the country, frontline personnel including doctors, sanitation workers, and paramedics, have been working tirelessly to stop the spread of the virus.

India's 10 central trade unions, most of them including frontline workers fighting against COVID-19, are set to stage a strike this Friday and Saturday. They want basic amenities and to be given adequate support for them and their families during this tough time.

According to the trade unions, they are being forced to take such a step after four months of the pandemic and national lockdown because none of their minimum requirements – safety, insurance, and risk allowance – are allegedly being provided by the government.

“Many of the workers have died due to corona during this period. Even their monthly wages are not beng paid for months", the trade unions said.

The unions have also said they will join the central trade unions’ call for “Jail Bharo Andolan”, a form of joint protest to court arrests, on 9 August. The day holds significance because on the same day in 1942 Mahatma Gandhi launched the "Quit India" Movement against Britain who ruled India at that time.

The protesters will go to police stations and will court arrest similar to what Mahatma Gandhi once did to protest against British rule.

Locally, over the last few weeks, frontline workers have been on strike and fighting it out in different parts of the country.

In India’s Bihar and Karnataka, ASHA workers (or health workers) are on strike starting today. In some states and areas, where the COVID-19 situation is very bad, workers will work wearing black badges.

The members of these unions are urging the government to clear all pending dues of wages and allowances of workers.

“The government should provide safety gear for all frontline workers, especially ASHA and Anganwadi workers and those in the health sector who are engaged in containment areas and red zones", a statement from the trade unions said.

They further seek frequent, random, and free COVID-19 tests for all frontline workers.

“The government should provide INR 5 million ($66,730) insurance coverage for all frontline workers covering all deaths on duty and pension/jobs for the dependants of the workers and also coverage of treatment for COVID-19 for the entire family", the statement mentioned.

The unions said that a minimum compensation of INR 1 million ($13,350) should be given for those who infected while on duty.

“An additional COVID Risk Allowance of INR 10,000 ($133) per month should be provided for all the contract workers engaged in COVID-19 duty, especially ASHA and Anganwadi workers", it said.

As per the unions, the demands will help improve the condition of workers in the country.