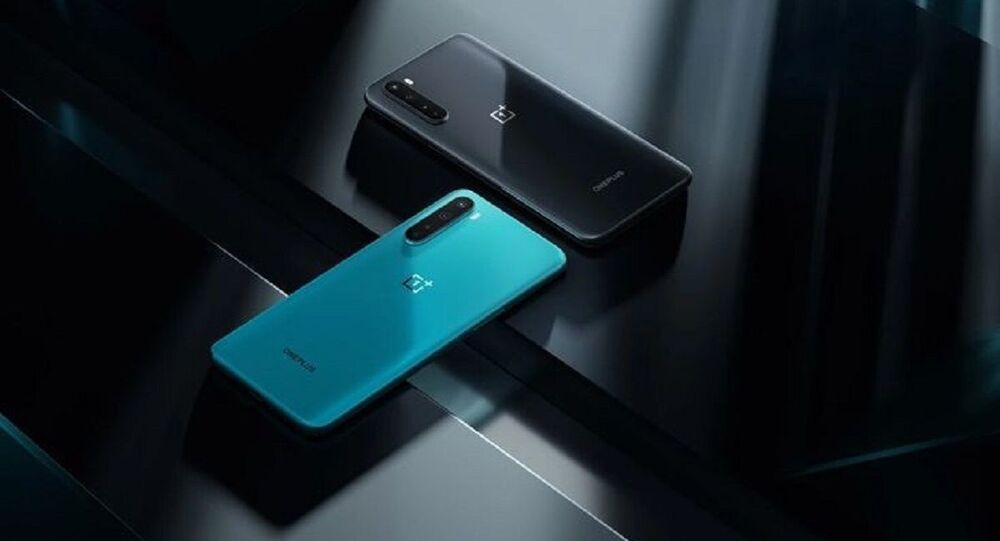 New Delhi (Sputnik): India's relations with China have soured in view of a months-long stand-off in the Ladakh region. India lost 20 soldiers in a violent clash with Chinese troops on the intervening night of 15-16 June in the Galvan Valley.

Riding on the anti-China sentiment, the #BoycottMadeinChina movement has gained major momentum in India, with people urging each other to stop using Chinese products. In response to the border tensions, India has also banned over 100 Chinese apps, citing national security concerns. The move came as a jolt to Chinese tech players, which otherwise enjoy massive popularity in India, especially in the smartphone segment.

In marble blue and grey onyx colours, the device has been launched in two memory variants – 8GB RAM+128GB storage and 12GB RAM+256GB storage, costing $373 and $400 respectively.

Despite the prevailing differences, Nord was received with open arms in India, marking a speed breaker in the anti-China drives on India’s social media.

We tested the premium 12GB+256GB variant of the smartphone in the onyx grey body. Here is how it fared for us.

Packed in rounded curves, the device sports a 6.44 inch Full HD+ Fluid AMOLED screen. Both sides of the handset are protected by Gorilla Glass, making the phone durable against scratches and cracks.

The top left side of Nord’s back body concentrates its linear quad camera setup, accompanied by the flash. On the other hand, the dual selfie camera is positioned on the top left corner of the phone’s screen in punch-hole style.

While the left side of the device hosts the volume rockers, its right side features the unlock button and OnePlus’ patent three-step slider button that lets one put the phone on silent, vibration, and loud from the hardware itself.

The slider button that comes along with all OnePlus devices could be more helpful if the company allowed users to set customisations for its functionality – like call-cutting, perhaps. All the buttons on the hardware are metal-made, adding to the grippy in-hand feel.

The dual SIM slot sits on the lower edge of the smartphone, next to the charging point and mono audio speakers. On the sleek-meter, the thick phone loses points.

Since both colour variants of the phone are light shades, fingerprints visibly gather on the back body which one may compulsively want to wipe off time and again.

Rest assured, OnePlus Nord feels like a trustworthy device in terms of being prone to occasional slips and drops.

​Display: Star of the Show

In one word, the FHD+ AMOLED display of OnePlus Nord is best in its class, especially in the affordable mid-range segment that it’s priced in. Another Chinese player, Xiaomi, which with its aggressive launches and affordable offerings is currently the top smartphone brand in India, also offers AMOLED displays that are a big hit with users. The phone unlocks with an impressively snappy fingerprint sensor.

An AMOLED display produces striking, punchy colours on the screen that makes gaming and watching content on the device a very immersive experience.

The device allows users choose the refresh rate of the screen from two options – 60Hz (Hertz) and 90Hz. At 90Hz, the device functions super smoothly, but eats up the battery a tad bit faster. With OnePlus’ quick charging capability, however, your Nord can easily keep up with rigorous gaming and constant multi-app usage.

The full brightness of the almost bezel-less display is appropriate enough even under direct sunlight, which makes using the device outdoors convenient.

Since the phone runs the company’s customised Oxygen Operating System (OS) based on Android 10, it supports an all-dark theme that makes the screen easy on the eyes.

The rear quad camera setup brings along a 48MP Sony IMX586 sensor for snapping clear images of far-away objects, an 8MP secondary sensor for depth, a 2MP one for close-up shots, and a wide-angle supporting 5MP lens. Nord’s selfie camera comes in a 32MP+8MP lens setup. The Nord is also the first OnePlus smartphone to put a dual camera on the front.

The built-in camera app on the device offers an array of basic features, like time lapse, panorama, slow motion, portrait, nightscape, and pro mode. On activating, the UltraShotHDR feature “learns your environment and intelligently blends multiple frames into an optimal photo”.

The camera app is snappy and does not lag while launching and mode-switching. The slow motion video mode records detailed videos in 4K resolution – which appear like visual treats.

The performance of both the front and the back cameras is satisfactory in all kinds of light settings. Even though the 48MP primary camera performs beautifully, other modules stop at the “just satisfactory” line, making the all-round experience just fine.

Xiaomi’s sub-brand Poco launched an even cheaper device called “X2” earlier this year that comes with a 64MP primary camera. Poco X2 costs around $200-$280 (INR 15,999-20,999), which is significantly less than Nord, making for a worthy competitor in the budget segment.

The 48MP primary lens is pretty satisfying, but it could have been coupled with better lenses than the offered 8MP, 2MP and 5MP sensors. pic.twitter.com/28DULqplU0

The video quality is superb. Look how the raindrops appear like crystal clear diamonds in slow motion. #Nord allows you to manually control focus for such videos so you can customise your videos better. @oneplus @OnePlus_IN @SputnikInt pic.twitter.com/Tc5E53onyw

OnePlus Nord is fuelled by the 5G-supporting Snapdragon 765G chipset developed by US-based chipmaker Qualcomm. The 756G processor is optimised for gaming. This means the graphics card is higher clocked and the chip also supports additional software features. The processor easily facilitates the offered 90Hz refresh rate for smooth multi-tasking and gaming.

The processor works well in synchronism with the device and ensures a smooth user-experience under heavy usage and continuous app-browsing.

Other recently-launched phones, like Vivo’s “S7” which costs more than Nord and Oppo’s “K7” that is priced slightly lower, also come with the same Snapdragon 756G chipset, testifying to the processor’s popular reputation with recent handsets.

The #Snapdragon756G processor totally vibes with the 90Hz refresh rate #Nord offers. Gaming and multi-tasking are smooth tasks for this budget device.

Apps do not lag while launching. pic.twitter.com/M0UzcSvoWY

OnePlus is a brand that has been known best-in-class for its charging capabilities. The “Red Cable Club” stays true to its name, as all OnePlus devices come bundled with one of the best charging and battery capabilities.

Nord comes packed with a hefty 4,115mAh battery that supports the “Warp Charge” 30T fast charging technology with a 30 Watt charger. The device charges to its brim in just a bit over an hour, which comes in handy with heavy device usage, especially during on-the-go situations.

The phone hardly heats up while on charge, which is relieving.

The bundled 30watt warp charger that comes with #Nord. Charges the phone before you even realise it. @oneplus @OnePlus_IN @SputnikInt pic.twitter.com/rkbTAgDuHN

​Hits, Misses, and Conclusion: This Could Be Just the Kind of Feature-Fed Budget Smartphone You’re Looking to Buy or Gift this Festive Season

OnePlus launched Nord towards the end of July, after which it is now ready to go on sale on 6 August at midnight. Several people took to social media declaring that they have placed their orders for Nord devices and are now eagerly waiting for deliveries.

Apart from the two mentioned memory variants, Nord will also be launching with a smaller 6GB RAM+64 GB storage variant priced at $333 (INR 24,999).

The device customisation options give a very personal vibe to the device.

​Disappointingly, the phone neither sports an LED notification light nor an audio jack for headphones. In addition, the offered storage cannot be expanded via a microSD card.

In all, the device is a star performer in the class of smartphones with promising durability.