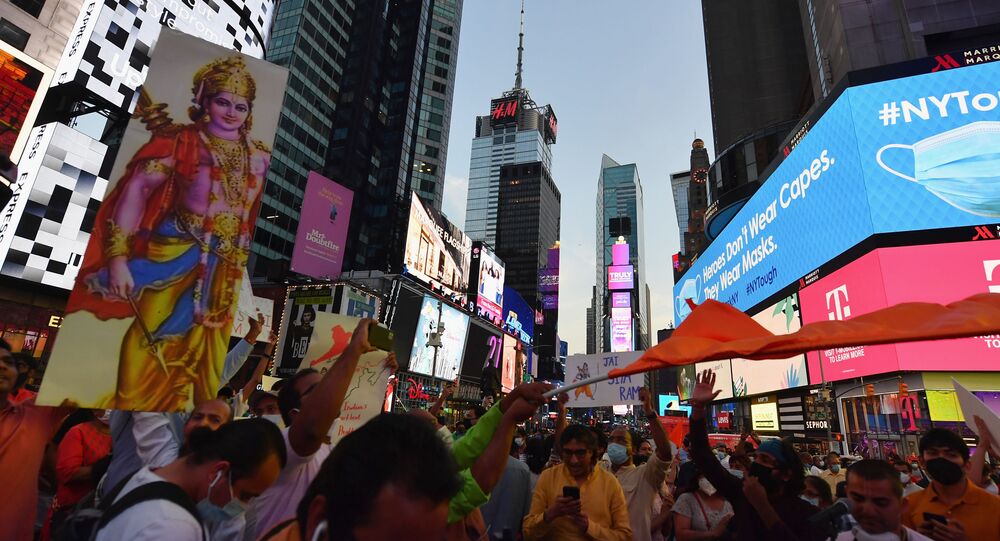 New Delhi (Sputnik): Indian Prime Minister Narendra Modi on Wednesday launched construction of a grand temple dedicated to revered Hindu God Ram at the venue the Hindus believe was the birthplace of the idol. The temple at Ayodhya in Uttar Pradesh will be complete in three years.

Several Indian-American organisations put together celebrations and protests over the groundbreaking ceremony for the iconic Ram Temple in Ayodhya by Prime Minister Narendra Modi on 5 August.

A huge digital billboard depicting the upcoming temple and images of Lord Ram were put up in New York's Times Square.

A large group of people from the Indian diaspora gathered near the digital billboard to celebrate the foundation-laying ceremony. The crowd sang hymns and chanted "Jai Sri Ram" (Hail Lord Ram) to the accompaniment of drums.

#WATCH USA: A large group of people, including the Indian diaspora, gathered near the digital billboard of #RamMandir in New York’s Times Square on 5th August to celebrate the foundation laying ceremony of the temple. The crowd also sang 'bhajans' and chanted 'Jai Sri Ram'. pic.twitter.com/Suzh75NbKz

​Another organisation representing Indians in the US. the American India Public Affairs Committee, hailed the construction of the Ram Temple in Ayodhya. They said it was a proud moment for India.

“It is a proud moment for India and Indians that our Ram Bhagwan (Lord Ram) and Ram Temple and the tricolour (Indian national flag) are on the most iconic screen in the world", said Jagdish Sewhani, President of the American Indian Public Affairs Committee, referring to the digital billboard.

It shows how successful Indians are in America that our #RamTemple & tricolour are on the most iconic screen in the world. It is a proud moment for India and Indians: Jagdish Sewhani, President of the American India Public Affairs Committee https://t.co/yitAmVM7yb pic.twitter.com/8miGQ067jW

​On the other hand, several Muslim and civil rights organisations held rallies in New York to protest the launch of the construction of Ram Temple and the first anniversary of the abrogation of Jammu and Kashmir's special status.

The protesters, under a banner of Coalition to Stop Genocide in India, assailed the launch of the Ram Temple in Ayodhya, which they described as "born out of their (fanatic Hindus) criminal acts".

​"It is unfortunate that Indian Prime Minister Narendra Modi, who seized power by fanning Islamophobia and hatred for non-Hindus and has tacitly encouraged violence against minorities, has finally put his stamp on taking India back to the medieval ages when destruction of places of worship and mass murder of faith-based communities was the order of the day", alleged Indian American Muslim Council President Ahsan Khan.

The groundbreaking for the Ram Temple was the culmination of a 500-year dispute between Hindus and Muslims. Hindus claim Mughal ruler Babur demolished the Ram Temple and constructed a mosque in Ayodhya during the 16th century.

Hindu zealots razed the mosque to the ground on 6 December, 1992, sparking one of the worst communal riots in post-independence India.

The dispute, considered to be the longest litigation in the country, lingered in various courts since 1950, until it came to the Supreme Court of India in 2011 for final adjudication. The apex court delivered its judgement on 9 November 2019 handing over ownership of the disputed land to Hindus, while ordering a suitable piece of land for Muslims to construct a mosque.

Wednesday (5 August) was also the first anniversary of the abrogation of Article 370 rescinding the special status enjoyed by the erstwhile state of Jammu and Kashmir. New Delhi had also divided the region into two federally administered territories – Jammu and Kashmir and Ladakh on 5 August 2019.