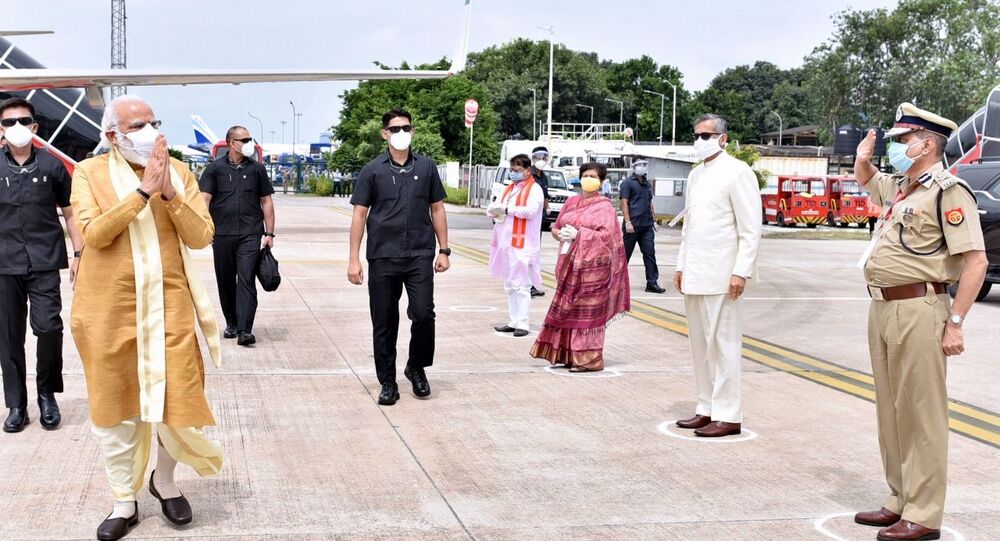 New Delhi (Sputnik): India’s Prime Minister Narendra Modi on Wednesday laid the foundation stone of the grand temple in Ayodhya dedicated to Lord Ram – a revered deity in Hinduism. For the governing Bharatiya Janata Party, the Ram Temple has been a major poll plank for over three decades.

With a grand temple coming up in India's Ayodhya soon, it will not only restore the holy city’s charm like other major Hindu pilgrimage centres such as Varanasi, Prayagraj, and Mathura, but also enhance the prospects of an economic facelift. Prime Minister Narendra Modi, during the foundation stone-laying ceremony of the temple today, also underlined that the temple's construction will change the region’s economy.

While the Indian state of Uttar Pradesh, where Ayodhya is located, has already made allocations for the city’s development, experts believe that tourism to the temple and a real estate boom will boost the economy and create jobs.

Rahul K. Mishra, professor of strategy and international management at the IILM Institute for Higher Education, told Sputnik, “The BJP may project Lord Ram’s grand temple as an international pilgrimage centre. People from other parts of India and abroad will obviously come to visit the temple. That will boost infrastructure and services sector in the vicinity of Ayodhya. For BJP, the temple is going to be a major achievement to showcase to its constituency”.

Mishra added that the process of constructing the temple will in itself be labour and material intensive and will be helpful by providing jobs at the construction site. As per an estimate, 350 labourers have been employed just to carve the stones to be used in the temple for the last one year.

Praveen Khandelwal, national secretary general of the Confederation of All India Traders, told Sputnik, “Construction of the temple will help revive the economy in at least 150 hectare radius of the temple. Hospitality, tourist facilitation services, hotels, resorts will get a major fillip. This will lead to local job creation as well”.

In fact, the state government started planning investments in Ayodhya immediately after India’s apex court cleared the decks for the temple in November last year, settling the decades-old land title suit between Hindus and Muslims in favour of the former.

In February this year, the state government made allocations for infrastructure development in the state. In the state budget, in February this year, $80 million was put towards an infrastructure facelift. An Uttar Pradesh government official told Sputnik on condition of anonymity, “The allocated amount will be utilised for building an airport, upgrading a nearby highway connecting Ayodhya to big nearby cities. A water supply project, a bus station and a hospital are also under the pipeline. Ayodhya railway station will also be upgraded”.

The official said that land acquisition for the different projects is currently underway and they will be complete by 2024, when the temple construction is also likely to be over.

Apart from these, the Uttar Pradesh government is also planning to set up a world-class township adjacent to Ayodhya with the name of Navya Ayodhya (New Ayodhya). The township will be promoted as an international pilgrimage spot and will have upscale hospitality projects, luxury hotels, and resorts. It will be developed as a destination for attaining moksha (salvation) - ultimate union with the Almighty which, according to Hindu beliefs, liberates the soul from the cycle of birth and death.

It is widely believed that those who die in India’s other ancient holy city of Varanasi attain absolution. Those approaching death go to Varanasi from across the country to ensure that they breathe their last in the holy city.

Along similar lines, UP is planning to project the Navya Ayodhya as a moksha destination for non-resident Indians as well as foreigners. The plan, however, provides a mega real estate opportunity for builders, as the government is planning to construct studio apartments, multi-storey buildings, and resorts in the new township.