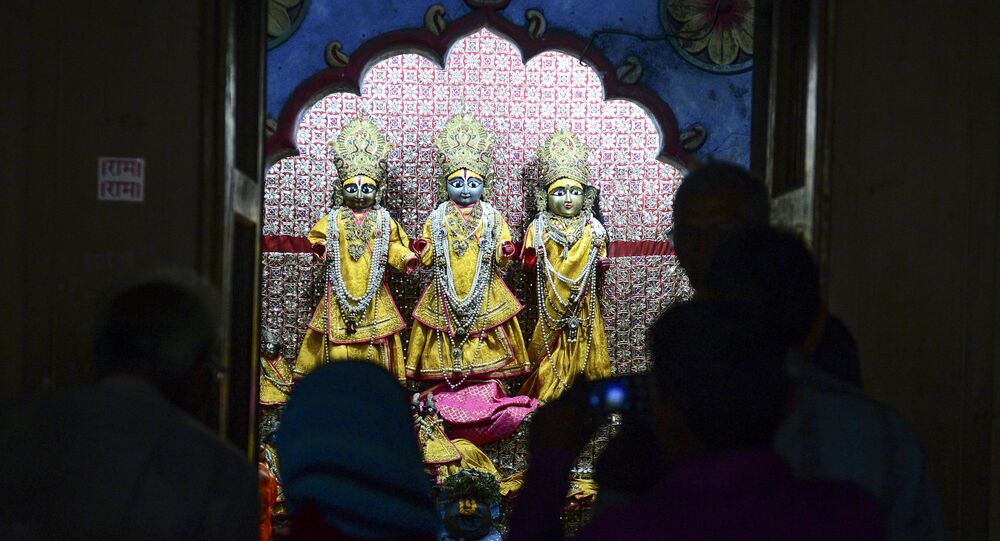 New Delhi (Sputnik): Indian Hindus and Muslims fought over a piece of land in Ayodhya, Uttar Pradesh for almost 164 years, triggering some of the worst communal riots. Finally, in a historic judgement, the Supreme Court of India handed over the land to Hindus, while granting an alternate piece of land for Muslims to construct a mosque.

Ahead of the foundation-laying ceremony for the Ram Temple in Ayodhya, slated for 5 August, Sputnik has compiled the key events that led to the historic event: from the beginning of the land dispute between Hindus and Muslims to the judgement by the Supreme Court of India, settling it and culminating in the groundbreaking ceremony for a grand temple dedicated to Lord Ram, believed to be the incarnation of Lord Vishnu, the most important gods in the Hindu pantheon or trinity of Hinduism.

Origin of Babri Masjid or Mosque of Babur

According to inscriptions on the site, Babri Masjid or Mosque of Babur was built between 1528 and 1529.

Hindus assert that before being demolished by Mughal Emperor Babur, there was an ancient temple dedicated to Lord Ram. Muslims, however, contended that the mosque was built by or at the behest of Babur on vacant land.

© CC0
Lord Rama Can Slay Coronavirus Once Temple Construction Begins in Ayodhya, Says BJP Leader
In 1856-57, riots broke out between Hindus and Muslims in the vicinity of the structure. The colonial government attempted to raise a buffer between the two communities to maintain law and order by erecting a wall.

In 1877, a door was opened on the northern side of the outer courtyard by the colonial government, which was given to Hindus to control and manage.

The bifurcation did not resolve the conflict and there were numerous attempts by both the parties to exclude each other.

In January 1885, Hindu Monk Raghubar Das, claiming to be the head of Ram Janmasthan (or Place of Birth of Ram) sought permission from the Sub Judge, Faizabad to build a temple in the outer courtyard of the complex. But the trial judge dismissed the suit, fearing riots between the two communities.

On 18 March 1886, the District Judge dismissed an appeal by Raghubar Das against the judgment of the trial court.

On 1 November 1886, the Judicial Commissioner of Oudh dismissed a second appeal by the monk, and held he had failed to present evidence of title to establish ownership over the land.

In 1934, there was yet another conflagration between the two communities and the domed structure of the mosque was damaged. It was subsequently repaired at the cost of the British colonial government.

In December 1949, on the orders of additional Cit Magistrate in Faizabad/Ayodhya the portion of the complex under Muslim control was taken over and the Chairman of the Municipal Board of Faizabad appointed custodian of the courtyard.

In 1950, a Hindu worshipper, Gopal Singh Visharad, sought a declaration from the Civil Judge in Faizabad that according to his religion and custom, he was entitled to offer prayers at the main temple near the idols.

On 17 December 1959, Nirmohi Akhara, a Hindu religious denomination, filed a petition before the Civil Judge in Faizabad claiming its absolute right to the birthplace of Lord Ram. The group sought to receive management over and charge of the temple.

In 1961, the Uttar Pradesh Sunni Central Board of Waqf and nine Muslim residents of Ayodhya – the religious endowment of Sunnis – the largest of the Islamic sects filed a case over their entitlement to the disputed site.

They claimed the old structure was a mosque, built on the instructions of Mughal Emperor Babur, following the conquest of the subcontinent in the 1530s. The Board claimed prayers were uninterruptedly offered in the mosque until 23 December 1949 when a group of Hindus desecrated it by placing idols within the precinct.

In 1984, the Vishwa Hindu Parishad (VHP) or World Hindu Council, started a campaign to open the locks of the disputed structure.

On 25 January 1986, one Umesh Chandra filed a petition before a trial court to break open the locks placed on the grill-brick wall and allow the public to worship from the inner courtyard.

On 1 February 1986, a District Judge issued directions to open the locks and to provide access to devotees to offer pujas inside the structure.

The district judge’s decision was challenged in the High Court of Allahabad in Uttar Pradesh. The High Court rejected the petitions by the Sunni Central Waqf Board and the Nirmohi Akhara, as those were barred by limitation. But the court held that Hindus and Muslims were joint holders of the disputed premises.

In July 1989, a petition was filed on behalf of the deity before the Civil Judge in Faizabad for a declaration of title to the disputed premises and restrain the defendants from interfering with or objecting to the construction of a temple.

On 10 July 1989, all petitions were transferred to the High Court of Allahabad. The court passed an interim order on 14 August 1989 directing the parties to maintain the status quo with respect to the property in dispute.

In September 1990, BJP President Lal Krishna Advani embarked on a Rath yatra (Chariot journey) from Somnath in Gujarat to Ayodhya in Uttar Pradesh.

Advani was arrested in Samastipur, Bihar by the state government then headed by Lalu Prasad from Rastriya Janata Dal.

In October 1991, the government of Uttar Prdesh headed by Chief Kalyan Singh acquired 2.77 acres of land near the disputed structure and gave it to Ram Janmabhoomi Nyas (Ram Birthplace Trust) on lease. The High Court of Allahabad, however, ordered that no permanent structure would be built there.

A few months later, on 6 December 1992, the temple movement reached its crescendo when thousands of "volunteers" came together to Ayodhya and demolished the disputed structure, which led to one of the worst communal riots across the country since independence. Over 2,000 people were killed in the riots between Hindus and Muslims.

The then federal government headed by Prime Minister P.V. Narasimha Rao dismissed BJP governments in Uttar Pradesh, Madhya Pradesh, Rajasthan, and Himachal Pradesh, and appointed a judicial commission headed by Justice Manmohan Singh Liberhan to investigate those responsible for provoking the demolition of the mosque.

© CC BY 4.0 / Oasis.54515 / Shree Ram Janmabhoomi Tirth Kshetra
High Alert: Intel Hints of Terror Attack on Iconic Ram Temple's Foundation Stone-Laying Day in India
A month later, the federal government took over the area of about 68 acres (27.52 hectares) through legislation, which provided for an abatement of all petitions pending before the High Court of Allahabad.

On 7 January 1993, then-President of India Shankar Dayal Sharma made a reference to the Supreme Court about “whether a Hindu or any Hindu religious structure existed prior to the construction of the Ram Janam Bhoomi and Babri Masjid".

On 24 October 1994, the apex court declined to respond to the presidential reference, reviving all pending suits and proceedings related to the disputed land.

In September 2010, the Lucknow Bench of Allahabad High Court delivered a judgement and divided the disputed land into three parts – one part was given to the Ram Temple, the other to Sunni Muslims, and the third to Nirmohi Akhara, a Hindu sect.