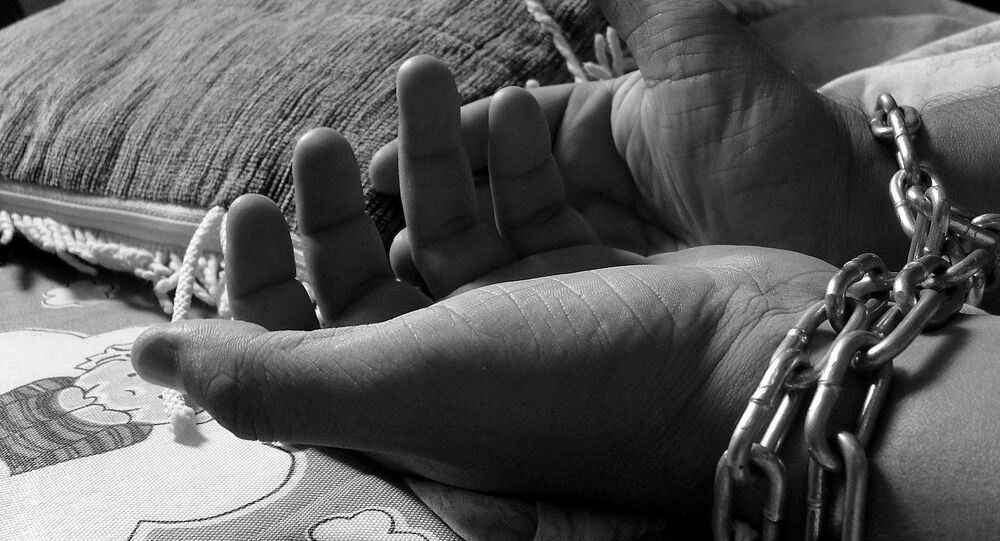 New Delhi (Sputnik): Human trafficking is a worldwide problem, for which the solution is rescue and rehabilitation. In India, rehabilitation is often impeded by the system and stereotypes that hold the victims responsible for their ordeal. One such survivor told Sputnik how each day is a challenge for her, despite having escaped her captors.

Meet Reshma Sultana (name changed to protect identity). The day she managed to escape her trafficker - all by herself - and returned to her village in West Bengal, she assumed her harrowing eight-month-long ordeal had come to an end. But little did she know that a more agonising struggle awaited her.

"When I came back to the village, the local villagers called me a bad/dirty woman (promiscuous) who had returned from a bad place. They wouldn't take me in, claiming that I would influence the other women of the village," she said.

Reshma was 17 years old when a man who claimed to be in love with her took her from West Bengal to Uttar Pradesh, promising to marry her. But instead he pushed her into prostitution, she says. Once she returned - pregnant - her elder brother and mother took care of her.

The girl gave a statement in court in favour of offering bail to the man who had deceived her when he faced charges, after the Panchayat (the village council) assured her that the man would take full responsibility of her and her child. However, he refused to offer help after securing bail.

The senior police officer related to the case told Sputnik that it was not a case of trafficking. "She went with him out of her volition; built physical relations and returned to her village after the man refused to marry her," the officer said. However, Reshma maintains that she was pushed into the flesh trade and the police initially discouraged her from filing the case.

The case is now in the court and the hearing continues. They verdict is yet to be delivered.

This is not an isolated case in India. Nearly 16 million women are lured into sex trafficking every year in the country. A large chunk of them are trafficked by men - a boyfriend or a male relative -  who promise to marry them or offer employment. Under these circumstances, the women is often held responsible for ordeal.

According to the National Crime Records Bureau (NCRB), more women and girls are trafficked in Mumbai and the city of Kolkata in West Bengal than in any other city in India. Kolkata also records highest number of missing women, at 2,584 cases in 2018.

However, what bothers Reshma now is that the accused trafficker is now out on bail after spending just 18 days in prison.

She claims that the accused continues to apprehend her, threatens to throw acid in her face, and has even tried to get her killed. Despite such open threats, she has no police protection.

"When I was in the hospital, my pimp tried to get me killed. Since then, the Panchayat has been pressuring me into withdrawing the case against him and the hospital. They even tried to bribe me with money. One day, my pimp accosted me, told me now I was all alone, and asked me for my number saying that he'll take care of me," she said.

Every day, Reshma tells herself to be strong. She continues to struggle not only to see her former pimp punished, but is also beginning to lead the fight against the Panchayat members regarding their inaction in providing support to the local community and other young women and girls like her.

This, she says, has irked the Panchayat members, who she claims have started "ill-treating her further". When she sought support in the wake of the super-cyclone Amphan, one of the members allegedly burnt her application.

Need of the Hour: Community Sensitisation

In India, the blaming and shaming of girls who survive sex trafficking is common. While some victims and their families feel too stigmatised to report the crime, others consider it a fait accompli. Society, hardened by such stereotypes, poses challenges for the rehabilitation of such women.

Priyanka Biswas, a social activist who manages a survivors' leadership programme, told Sputnik that India needs to encourage the community-based rehabilitation of survivors.

"The community should be sensitised to receiving back such women. We talk about the crime but we do not talk about traffickers so much (in awareness programmes). Therefore, the society blames women for their ordeal, not the trafficker who broke her trust."

The Indian government's Ujjawala scheme, which focuses on trafficking and its prevention, encourages the establishment of rehabilitation facilities such as shelters for victims, as well as basic inputs of food, clothing, counselling, medical care and legal aid.

Therefore, experts argue for post-rescue community sensitisation for the survivors, who are vulnerable to exclusion and discrimination in society.

Loopholes in the system

Another aspect of the system that mars that prospects of accused traffickers and pimps facing fair trials are the loopholes in the system and corruption. Priyanka Biswas explains that corruption plays a role in procurers of prostitutes facing less stringent charges.

"In the lower court, we often find that the public prosecutors are corrupt and they do not put up a strong fight. That is something that we have seen quite a lot. So you'll find that the traffickers get bail from the court and the law takes its own course," Priyanka said.

She also emphasised the need for a much more comprehensive and holistic law to deal with the grievous crime. "It is a very serious crime and I believe that there should be a stronger and comprehensive law to combat it. The law that we have right now is not stringent enough to ensure that all forms of trafficking come under it."

While the Indian government has attempted to bring in comprehensive legislation to tackle human trafficking - the Trafficking of Persons (Prevention, Protection and Rehabilitation) Bill, in 2018, it has yet to be ratified by Parliament.

Mohidul Islam, a member of the NGO Gokulpur Sebasadan and a member of the network Partners Against Trafficking (part the Indian Leadership Forum Against Trafficking - ILFAT), tells Sputnik that when Reshma came to the organisation, she would cry often. But gradually she has become courageous and is working for the welfare of female victims of violence in her community.

She still breaks down while talking about her mother, who passed away recently due to a heart attack. Reshma says that even though she feels lost without her, she continues to derive her strength from her.

"I am fighting to fulfil my mother's dream to get the trafficker punished. My mother used to say that it happened with me today, and tomorrow he might do the same with some other girl."