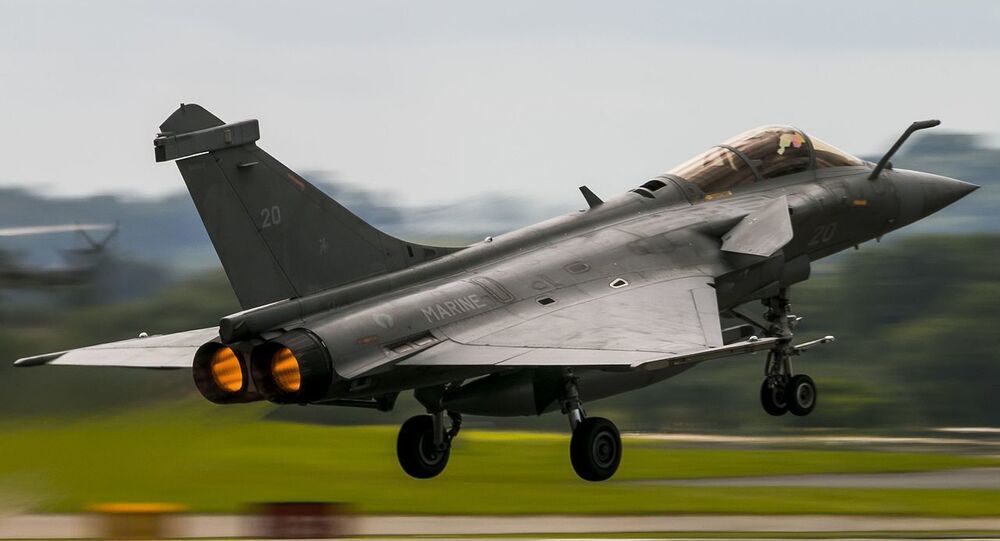 New Delhi (Sputnik): The Indian Air Force has a shortage of around 10 squadrons of combat aircraft after phasing out its MiG-21 and MiG-27 fighter planes. The induction of French Rafale jets on Wednesday was the first to take place in two decades - last time, India bought 270 Su-30 MKI from Russia in staggered contracts in the late 1990s.

The much-awaited induction of five French Rafale fighters to the Indian Air Force witnessed a rare sense of jubilation in the country, beginning with Prime Minister Narendra Modi. The Indian PM quoted a Sanskrit verse to welcome the induction.

“Any pledge, any sacrifice equal to keeping a nation secure have never been seen. [You] illuminated the sky by touching it. Welcome!” Modi’s quote roughly translates to.

​The contract for acquisition of 36 Rafale fighter jets at a price of US $8.7 billion was signed in 2016, two years after Modi came to power, to arrest the depleting inventory of the Indian Air Force.

Defence Minister Rajnath Singh said that it “marks the beginning of a new era in our Military History”. Singh received the first Rafale in October 2019 in France.

The Birds have landed safely in Ambala.

The touch down of Rafale combat aircrafts in India marks the beginning of a new era in our Military History.

These multirole aircrafts will revolutionise the capabilities of the @IAF_MCC.

​India’s federal Home Minister Amit Shah expressed hope that the world-class fighter jets would prove to be a “game changer”.

“These are the world's most powerful machines capable to thwart any challenge in the sky. I am sure Rafale will help our Air warriors to safeguard our skies with its mighty superiority”, Shah said in a series of tweets.

Rafale touchdown is a historic day for our vigorous @IAF_MCC and a proud moment for India!

These are the world's most powerful machines capable to thwart any challenge in the sky. I am sure Rafale will help our Air warriors to safeguard our skies with its mighty superiority. pic.twitter.com/wTsK0XYcIX

As the twin-engine fighter jets touched down on the tarmac, they were given a ceremonial water cannon welcome.

​A great day in history of @IAF_MCC as first 5 #Rafale fighters land at #AmbalaAirbase . Our government has bought total 36 Rafale from France. The remaining fighter aircrafts will also land in India as per the timetable. pic.twitter.com/pNLhKukh03

​The five jets took off from the Merignac Airbase in the French port city of Bordeaux on 27 July and covered almost 7,000 kilometres, with an overnight stopover at Al Dhafra Base in Abu Dhabi, which houses US and French troops as well as aircraft.