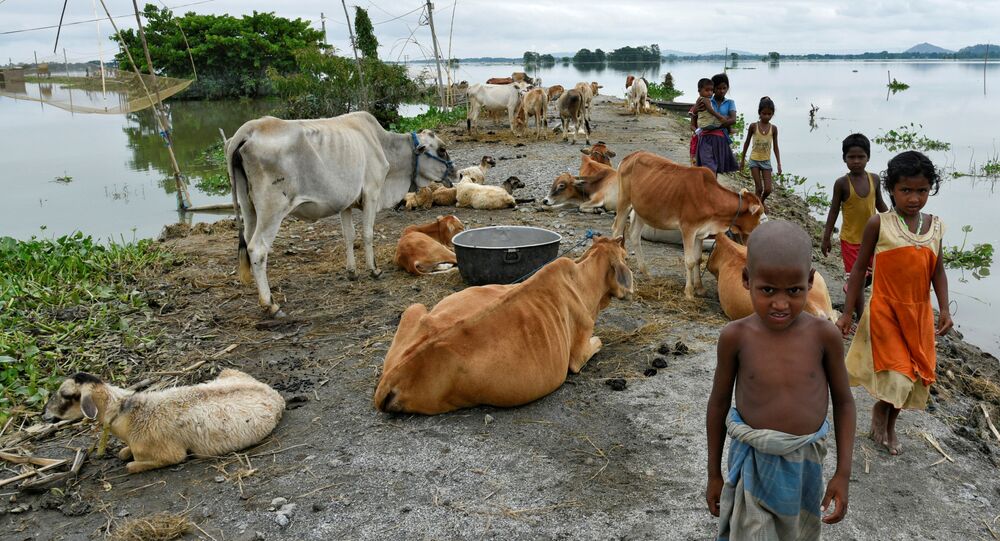 Two Indian States Floundering in the Grip of Floods and Coronavirus

New Delhi (Sputnik): India’s northeast state of Assam was in the grip of a long phase of floods, with 21 of the 33 state's districts badly affected. So far about 5.7 million people have been affected, with over 42,000 people housed in 236 makeshift camps. According to the disaster management agency, 104 have lost their lives in floods this year.

The northeastern Indian state of Assam still is reeling under heavy floods, with the mighty Brahmaputra River and its tributaries flowing above danger levels in several areas. This is the second phase of floods in the state, the first was in May.

About 75 percent of the world-renowned Kaziranga National Park, known for one-horned rhinos and the Bokakhat Tiger Reserve were submerged. According to the Assam State Disaster Management Agency, a total of 137 animals including 14 rhinos have died during this monsoon season, and that 163 animals were rescued.

In the eastern state of Bihar, 11 of its 38 districts were in the grip of floods and about 2.4 million were affected, according to the state disaster management department. So far 10 people have died in floods across the state.

The Meteorological Department in the state capital Patna has warned of more rainfall until 1 August in northern parts of the state, closer to the Himalayan foothills. Several rivers and their tributaries in the state are flowing above the danger mark.

Both Assam and Bihar were also in the grip of COVID-19, with daily increase in the caseload. In Assam, there were 8,241 active cases, up by 153 since Tuesday (28 July) while 88 people succumbed to the infection.