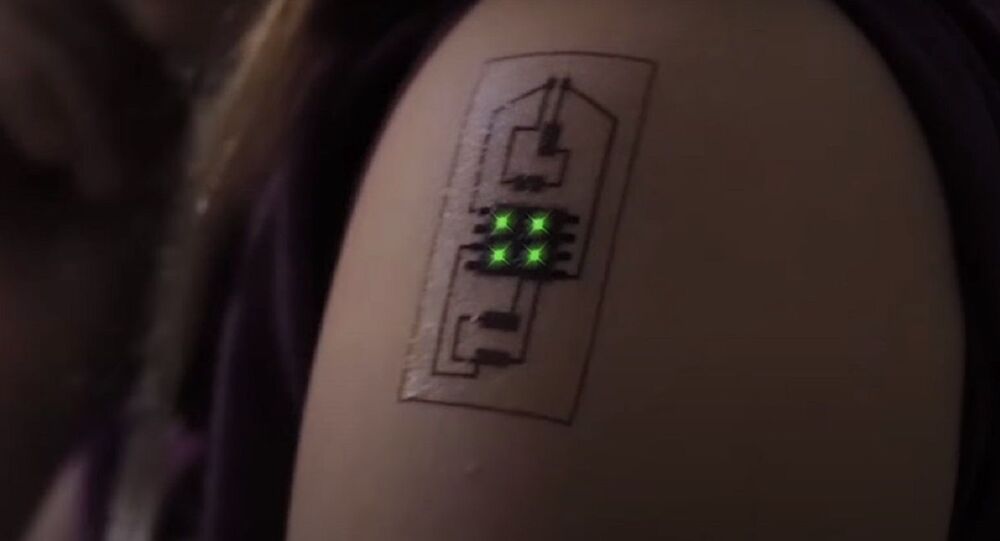 New Delhi (Sputnik): It wouldn't be an exaggeration to say that the 21st century will go down in history as the era of tech revolution that took the intelligence and capabilities of humans to the next level. We have witnessed the rise of smart tech with Artificial Intelligence, Machine Learning, but there's a lot more coming up.

Search engine giant Google is reportedly working on "smart tattoos" that which will be embedded with sensors and turn the human body into touchpads.

The idea is part of a wearable project from Google Research called "SkinMarks". Google has provided funding to a group of researchers from Germany's Saarland University to develop the technology.

The news has gone viral on social networking platforms in India, but as of now, nobody seems to be taking this too seriously. Google Glasses – that function as a hands-free smartphone, letting users access a mobile internet browser, camera, maps, calendar, and other apps by voice commands – could not make a strong impact on the global market. They were one of the company’s most awaited wearable products that ended in disappointment.

Some are also calling out Google for trying to turn humans into tech-powered robots.

How exciting ! Given how google glasses turned out pic.twitter.com/h8JmGoKVry

Basically, Google wants to put their search bar on you?🤔

... so that US companies can hack human bodies and make them zombies

This will ruin China as mobile hardware business will go to gallows.

​How Will They Work?

The tattoos are created by screen printing conductive ink onto tattoo paper that will stick on the skin for designs and be removed once the design gets on the skin.

The rub-off sensor-driven tattoos are applied to a body part with an even skin surface. The sensors in the tattoos will respond to touch and swipe gestures on the skin.

According to the Saarland University white paper, "You could squeeze the area around the tattoo or bend your fingers or limbs to activate the sensors".

Google is working on smart tattoos that, when applied to skin, will transform the human body into a living touchpad via embedded sensors. @SputnikInt pic.twitter.com/wu5yZBsHrN

Unique geometries can also be formed by a group of multiple adjacent landmarks, such as the four knuckles of a hand.#SmartTattoos @Google pic.twitter.com/NZb7SZR0yp

When the index finger is straight, it affords continuous and linear movement along the finger. It then acts as a volume slider. When it is bent, the flexure lines at the joints become more prominent; they visually and tactually split the input area into three parts," Saarland Uni pic.twitter.com/5Wfmu70y2t