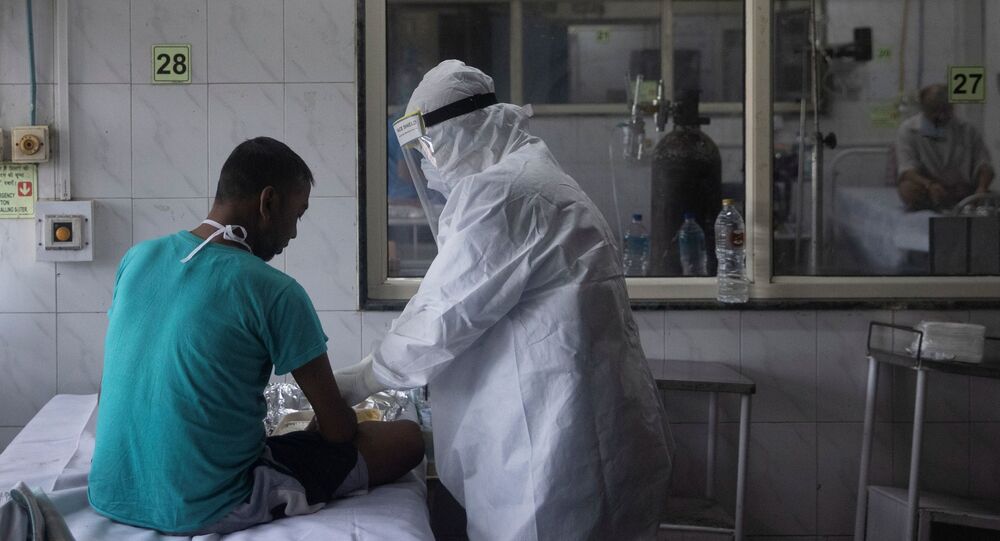 New Delhi (Sputnik): Total Covid-19 infections in India have reached 1,385,522, with the death toll standing at 32,063. The national capital New Delhi and the states of Maharashtra and Tamil Nadu are the worst affected, with the number of cases in each of these regions exceeding 100,000. Of the total affected, 885,577 have recovered so far.

When 55-year-old Vijay Shyamlal Gupta, a roadside clothes shop owner in Mumbai city, developed a high fever on 7 May, his family had hardly any clue that a common fever would turn their life upside down.

But as Gupta’s condition deteriorated, his three sons, two of whom are unemployed due to the national lockdown, swung into action.

The already financial-crisis hit family rushed its breadwinner Gupta to the nearest civic body-run hospital. But the hospital authorities refused to admit him.

© Photo : Serum Institute of India
India’s Largest Vaccine Manufacturer to Provide 50% of Anti-COVID Doses to Poorer GAVI Nations
The family then took him to a local private clinic, which diagnosed him with pneumonia. It was also suggested that he seek highly-qualified medical attention at any hospital.

Since he had family medical insurance of INR 500,000 ($6,666), meaning health insurance of the same amount for each member, his sons finally took him to a private hospital. After being admitted there, he was found to be Covid-19 positive.

But after having their father under treatment for 12 days at that hospital, the family was shocked to receive the most feared call about his death.

"On 19 May, I received a call from the hospital that my father was no more," Gupta's youngest son Neeraj shared with Sputnik.

However, the family’s ordeal did not end with the death. The family was now too much into debt, owing to the extra cost they had to pay for during the treatment period, because health insurance covers only some specific costs of a patient’s treatment at the hospital. The family’s other expenses at the hospital and at home kept on mounting.

According to the practice followed by local hospitals, even with mediclaim, an advance has to be paid before hospitalisation for any treatment.

"I managed some funds from my employer, as advance salary and paid back in return for our residential house's documents that were pledged," said Neeraj Gupta, who is involved in consignment loading and unloading work for transporters. His voice chokes as he shared how despite running from pillar to post to save his father, the family couldn’t even see him. His last rites were performed as per Covid protocol, which allows only one family member to be present during the cremation. So, dressed in protective gear PPE, only the eldest son could attend the funeral.

© REUTERS / Danish Siddiqui
Relatives pray before the cremation of a woman, who died due to the coronavirus disease (COVID-19) at a crematorium

Experts working in the field of patient welfare believe that even though Covid-19 is a huge drain on the patient's financial resources, instances of hospitals fleecing patients have also come to the fore.

Mumbai-based Jitendar Tandil - a patient rights activist - said numerous cases have come up in which families have been made to pay through the nose for Covid-19 treatments. In most of the cases, the billing amount exceeds what's assured in the family's health insurance plan.

Blaming hospitals for the exaggerated bills, Tandil shared with Sputnik, "Ever since the Covid-19 pandemic began, at least eight to ten major cases have been brought to my attention. A ventilator bed cost is inclusive if doctors' consultation, nursing, x-Ray, 2D Echo, etc. The hospitals often charge separately for these to inflate the bills."

According to the Indian ministry of health, in Maharashtra, there are a total of 366,368 confirmed cases of coronavirus of which 13,389 have succumbed to the pandemic. There are 145,785 active cases.

India’s national capital city appears no different. A number of patients here too are facing a similar fate. The financial strain to get treatment in private hospitals is taking a big toll on families.

© REUTERS / Francis Mascarenhas
Delhi, Mumbai to Succeed in Containing COVID-19 by October: Ex-Medical Association Chief
A 40-year-old patient who is currently undergoing treatment for Covid-19 in one of Delhi’s leading private hospitals told Sputnik, while requesting anonymity: “I paid INR 150,000 ($2,000) from my own pocket at the time of hospital admission. But the medical bill has since then zoomed past the insurance coverage that I have.”

Having recuperated after severe illness, treated through two doses of plasma therapy and ventilator support, he often calls his friends and family from his hospital room seeking help to pay for his medical bills.

“My friends and my relatives have somehow arranged for funds and they keep asking me not to worry for the same,” he added.

Some families blame the existing lack of coordination between the hospitals and the insurance companies for aggravating the problems of patients and attendants.

Delhi resident Durgesh Narang, who was discharged from the city's leading private hospital a week ago, told Sputnik, “The hospitals calculate bills as per the laid down guidelines, while the individual’s medical insurance policies may have tailor-made provisions for the policyholder, causing variations in the bill. It causes much confusion in getting the bill rectified at the end.”

Though insurance companies are thought to be the ultimate relief for people in normal times, during the Covid-19 pandemic the unknown costs of various involved procedures and other expenditures are proving too much for virus-hit families, said an insurance agent in Delhi.