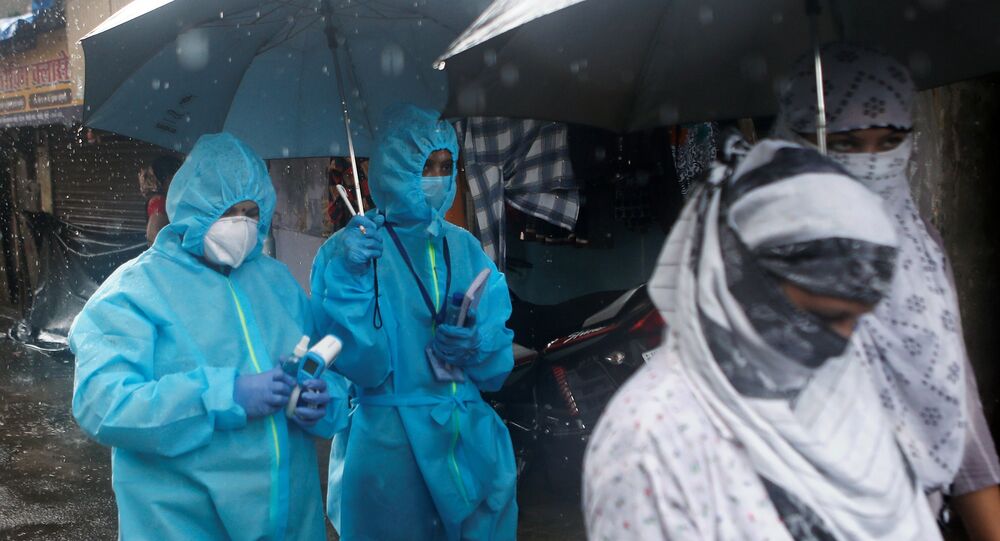 New Delhi (Sputnik): From an unprecedented spike in the number of COVID-19 cases and crumbling health infrastructure, to a significant decline in daily cases and deaths, Delhi has come a long way in its fight against the pandemic. However, experts warn that the a large part of the population remains at risk.

In a recent serological survey conducted by New Delhi to study the antibody prevalence among the general population, it was revealed that 23.48 percent had contracted coronavirus and that many were largely asymptomatic.

With the state government announcing that a similar survey will now be conducted every month to analyse the prevalence of the disease, Dr. Vinay Aggarwal, Former National President of Indian Medical Association, told Sputnik what the trend means for Delhiiites; and what can we infer from the fact that over 23 percent (4.2 million) of the capital's population, were infected, many without even realising it.

Sputnik: Serological survey says one in four people affected in Delhi, what can we infer from the data?

Dr. Vinay: The experts were debating whether 23.48 percent can be called a community spread. I don't like the word community spread, but the fact that 23 percent of the population has suffered from COVID-19, is not a positive but a dangerous figure. The fact is initial carelessness and certain bad decisions are responsible for causing this kind of spread in Delhi.

Secondly, nearly 120,000 people have tested positive with over 3,000 deaths in Delhi. It also means that these are people who got tested. There might be many who had mild symptoms and did not get a COVID-19 test. I have a feeling that if there is no community spread in Delhi, there is definitely community transmission in some containment zones of the city.

In one way, the Delhi figures are satisfying and encouraging looking at which we can say that the capital has contained COVID-19. But that does not mean that we should shirk our responsibility and be complacent.

Sputnik: Since a large number of general population got affected and recovered without even realising, does it imply that the virus is not very deadly?

Dr. Vinay: If you see Western and European countries, the death rate is 8-10 percent. In India it is 2.5-3 percent. So I would say our immune system is a little better because we are exposed to some viral ailment or the other.

Secondly, maybe some strains of the virus that are affecting India are a little less virulent.

Sloganeering and proper methods like lockdown were percolated, where everyone started taking precautions. So that also reduced the number of deaths. Our concern today is not to see whether the patients are increasing, but to have as few deaths as possible.

Sputnik: With nearly 50 lakh people affected in Delhi now, how much time would it take for Delhiites to reach herd immunity?

Dr. Vinay: It is difficult to say at this moment but as All India Institute of Medical Science Director Randeep Guleria has said, that a few metropolitan cities like Delhi, Bombay and Ahmedabad are seeing a reducing trend. You cannot see a situation where there will be no coronavirus cases, but by October or so, COVID-19 will be reasonably controlled in these cities.

Sputnik: Should we worry that over 23 percent of Delhi's population who showed antibodies missed out on testing?

Dr Vinay: No, I don't think so. If you see, in the initial one or two months, the government did not even have sufficient kits to test. So we cannot say testing was not there.