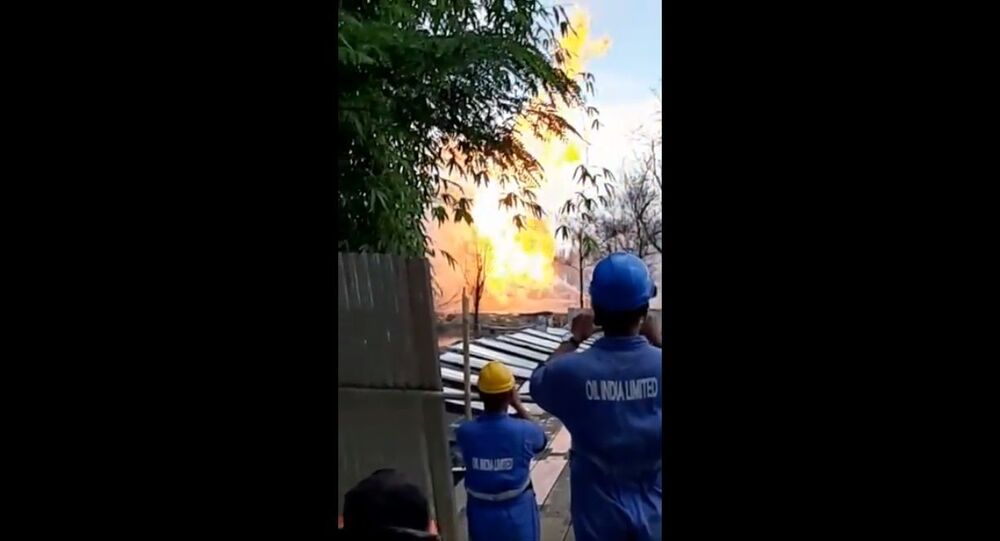 New Delhi (Sputnik): State-owned Oil India Limited's Bhaghjan gas well - one of its most productive - caught fire in the northeastern state of Assam after a blowout on May 27. Aside from displacing thousands, the sudden and uncontrollable flow of oil and gas is causing unprecedented damage to the biodiversity and wildlife in the region.

Days after Oil India Limited said that the fire at the Baghjan gas well in the Tinsukia district of Assam was raging even a month after the blowout, a new explosion occurred at the same gas well on Wednesday.

Three foreign experts were injured in the explosion and have been rushed to hospital, Tridip Hazarika, Oil India Limited's spokesperson, told media.

After several countries expressed a desire to help contain the threat, foreign experts were called in to limit the damage from the blowout.

The incident occurred while the operation to douse the fire was underway. The operation has been called off for now.
The nationality of the foreign experts injured in the incident is not yet known. Though they were supposed to finish the operation by 7 July, the task was obstructed by floods and heavy rainfall in the state.

Since the first blowout took place on May 27, leading to an explosion on 9 June which killed two firefighters, the well has been spewing gas continuously, causing damage to the environment and wildlife at Dibru Saikhowa National Park, tea gardens in the proximity of the blaze and the Maguri-Motapung Beel wetlands.

Nearly 9,000 people have been evacuated from nearby villages to relief camps. Prime Minister Narendra Modi spoke to State chief minister Sarbananda Sonowal soon after the blowout and offered him all possible assistance.