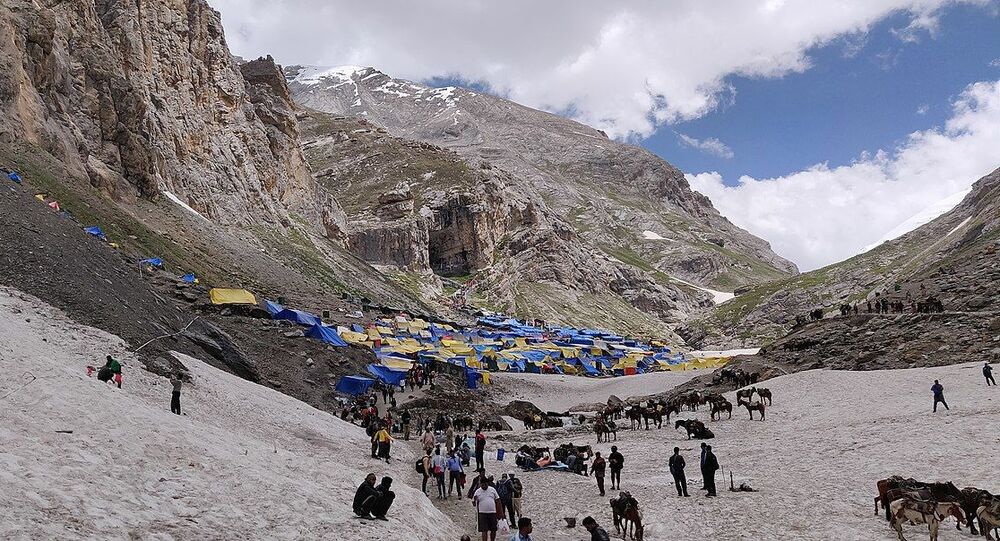 New Delhi (Sputnik): The Amarnath Shrine pilgrimage is an annual affair in India when thousands of people undertake an arduous journey through difficult terrain unmindful of freezing temperatures to worship Lord Shiva. He is believed to manifest himself in the form of an ice stalagmite in a cave located at a high altitude in Kashmir.

After long-prevailing uncertainty, the annual pilgrimage to the Amarnath Shrine was cancelled for this year in view of the mounting COVID-19 cases in the Kashmir region. The decision was taken by the Amarnath Shrine Board of Jammu and Kashmir, which manages the affairs of the temple.

The decision came as the pilgrimage, undertaken by thousands of devotees from different parts of the country, was slated to commence from 21 July and last until 3 August.

The cave shrine, located in the Ananthnag district of the Jammu and Kashmir union territory, is around 3,880 metres above sea level.

​The COVID-19 cases in the newly-formed union territory of Jammu and Kashmir have risen significantly, with the total number of cases at 14,650. The region also saw its highest spike in daily cases at 751 cases in the last 24 hours since Monday. The local administration has ordered a weekend lockdown in the region starting from 24 July 6:00 pm (India time).

​The cave shrine, revered by millions of Hindus, usually opens between July-August as per the Hindu almanac. The deity in the cave is formed by the trickling down of icy water, which freezes and takes the form of "Shivalingam" (a symbolic representation of Lord Shiva).

Indian scriptures mention that this is the place where Lord Shiva, the god of destruction, revealed the secret of life to his wife Parvati, a Hindu goddess.