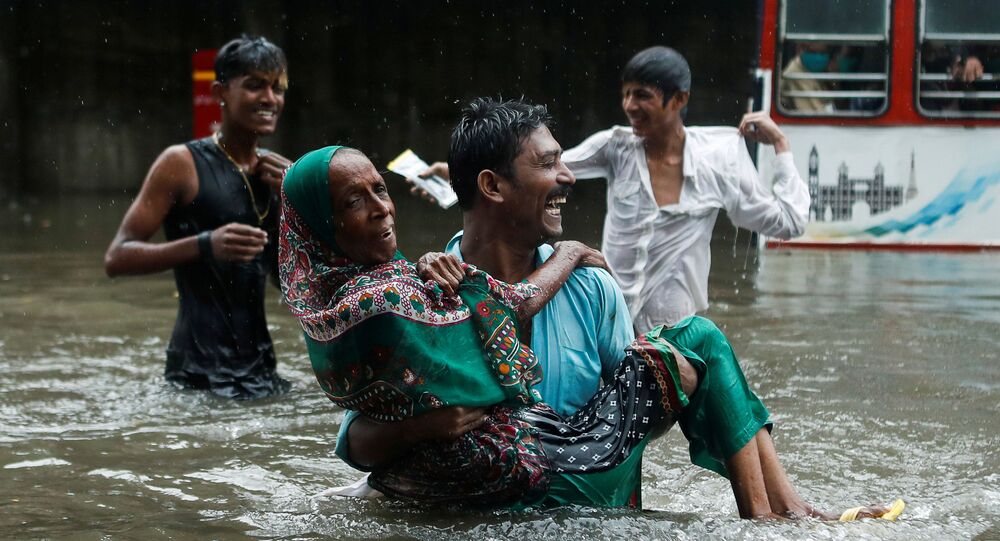 New Delhi (Sputnik): The hot and sweaty summer is gradually coming to an end in India, making way for the glorious monsoon to march in and refresh everybody. In coastal areas of Maharashtra state, including Mumbai, a red alert has been issued by the Indian Metrological Department (IMD) in the wake of heavy rains. This story has a twist though.

Everybody around the world knows Mumbai for its Los Angeles-vibe. Located by the Arabian sea, the "city of dreams" is famous as the capital of Bollywood. But not a lot of people know that monsoons in Mumbai, which, we Indians very fondly call "Bombay", have a charm all of their own.

Just as soon as the ancient city witnesses its first rain showers, Indians turn into writers and poets just to romanticize "Bombay ki Barish" - the Monsoons of Mumbai.

Pictures of Mumbai’s iconic sea-side "Queen's Necklace" also known as "Marine Drive" - shimmering in the rains have started casting monsoon magic spells on social media in India. The spot overlooking the “Gateway of India” is a couples’ favorite and when it begins raining in Mumbai, sweethearts from all age groups make their way to Marine Drive and create and re-create precious moments – many of which are inspired by Bollywood.

This year, because of the serious pandemic situation, Indians are just staring at old pictures from their Mumbai monsoon experiences, “dying to be there right now”.

I may look fine, but deep down I am dying to be at Marine Drive right now!!!!#MumbaiRains pic.twitter.com/Z2jQ2qrJcK

​To feel closer to the lost feeling of standing by the sea somewhere in Bombay while it rains, people who are not in the city now are preparing Bombay-special rainy-day snacks like gram-flour fretters, piping hot masala tea and the quintessential “Vada Paos” – which is a spicy stuffed deep fried potato patty, placed between two buttered buns served with green mint chutney and fried chilis.

The charisma of the Mumbai rains are welcomed with open arms every year...but then things begin to get somewhat serious, even scary.

The rains in Mumbai approach with love but later, like an irrational boyfriend, misbehave with the city. Floods and water-logged roads are a yearly phenomenon that Mumbai has to survive before winter comes.

Mumbai has been paying a heavy price for its rapid growth. More often than not, the initially mesmerizing showers turn into catastrophic downpours, trapping people inside their cars, homes or restaurants for hours, sometimes even days. And because of a failing sewage system in the huge city, some parts of Mumbai almost drown during the monsoons..

Stunning, eye-popping pictures and footage of Mumbai Monsoon 2020 have been making the rounds on social media. They show the fury of the rains lashing Mumbai, 'almost for loving it so much since forever', is how the poets describe it.

Nevertheless, rains personifies the beauty of Mumbai and even if it causes a severe inconvenience for residents, every year “Bombay ki Barish” enchants the city in hues of shiny silver droplets turning into nothingness in the vast Arabian sea.